After catching a glimpse of Katherine Heigl’s photos over at The City Sage, I couldn’t resist thumbing through the June issue of Harper’s Bazaar in the airport on the way to San Diego. The photos are even better in their full-page glossy glory, so I bought the magazine and happily discovered on the flight that Harper’s Bazaar is a smart and well-edited read. Since June is drawing to a close and I’m still stuck on these photos, I thought I’d share in time for you to pick up a copy.

Photographed by Alexi Lubomirski, the photos depict the ever-enchanting Katherine Heigl at her home in Los Angeles with dogs that have been rescued and adopted. I’m no Katherine Heigl expert (nor any celebrity expert, really), but I was for some reason taken aback to learn that she has six adopted dogs of her own! I couldn’t put up with the constant chaos that comes along with six dogs—tails flying every which way, playful little yips and yaps, riled up canines wrestling in the living room—no thanks. Of course, her lovely home is probably ten times the size of my apartment and she has the funds to pay for pooper scoopers, but still, that’s serious puppy love.

Here are my two favorite photos: 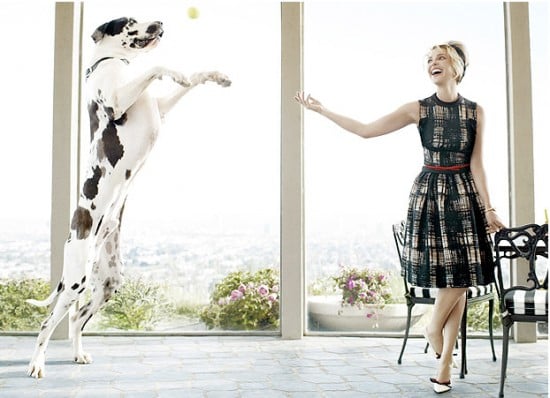 The redeeming quality of the piece, and the reason why I’m writing about it all here, is that Heigl and her mother, Nancy Heigl, have founded a dog rescue and adoption foundation.

Last summer, throughout the process of visiting animal shelters, emailing dog caretakers, finding the right dog (Cookie!) and adopting her, I developed a strong sense of respect for everyone involved in saving dogs from homelessness or worse, death. If you’re looking for a new canine companion, please visit an animal shelter before making your final decision. You may just find the dog for you.