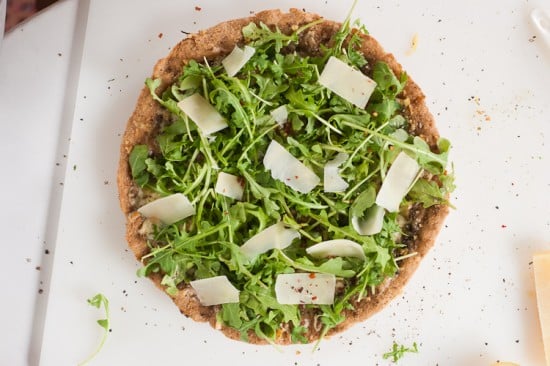 This weekend was an odd one, a study in contrasts between calm and chaos. A tornado came too close for comfort on Friday. My mom called to warn me that it was nearing and my friend Matt showed up as the sirens started going off a few minutes later. I barely had enough time to grab my dog, computer, an old family album and a bottle of bourbon before we raced down to the basement.

I kid around about throwing basement parties during inclement weather, but that tornado took off some rooftops and uprooted an enormous tree less than a mile from my place while we listened to the radio and nervously sipped on our drinks downstairs. By the time we got out, the only evidence in my immediate vicinity was a few extra twigs and little tree limbs scattered around. 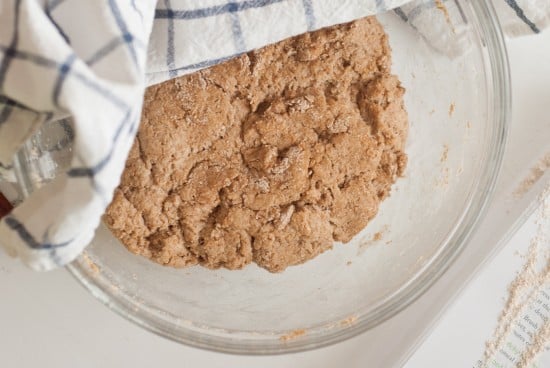 This pizza would have been fine basement fare, but we didn’t make it until the next day while we were waiting for another storm that never came. Regardless, I’m so glad Niki chose pizza for The Food Matters Project this week. For those of you who are new around here, The Food Matters Project consists of a group of food bloggers who are cooking through Mark Bittman’s The Food Matters Cookbook together. It’s the brainchild of Sarah and cofounded by yours truly, and our goal is to inspire healthy cooking. So far my favorite FMP recipes have been the most versatile ones because I enjoy seeing everyone’s unique interpretations of the same recipe. 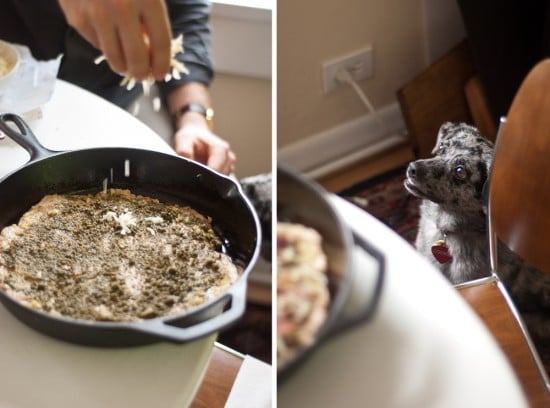 This winter, I went to Crested Butte with my friends Matt and Mark, during which time we became utterly obsessed with an arugula-topped pizza at The Secret Stash. That pizza was the table-hushing, expletive-inducing kind of delicious that one never forgets. It had a bubbly, chewy, sourdough crust that was intensely and inexplicably lemony around the edges.

At our request, they topped it with a perfect, simple red sauce, and prosciutto (hey, I was on vacation). All of that was covered up with a healthy dose of fresh baby arugula, lots of parmesan shavings, and served with half a lemon to drizzle on top. This photo doesn’t do it justice. We ate at Secret Stash three times during our five-day stay and bemoaned the increasing distance between us and that pizza all the way home. 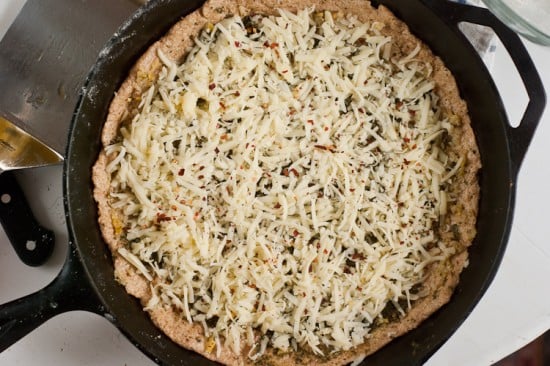 It recently dawned on me that I have never explained my determination to use 100% whole grain flours on this blog. Not a single recipe on here calls for all-purpose flour, and this is for good reason because I am slightly hypoglycemic. My blog sugar levels are extra sensitive to simple carbs. When I was young, I learned the hard way that eating only white pancakes for breakfast would inevitably result in me feeling miserable later on in the day—shaky, sweaty, can’t-think-straight-with-a-terrible-stomach-ache miserable.

It’s hardly a problem these days because I eat well-balanced meals and I eat often. When I eat out, I try to avoid meals that are too carb-heavy or full of sugar, and at home, I make everything with whole grains because I’ve found that I don’t crash after eating complex carbs. Naturally, recipes here are a reflection of what I eat at home. I feel good about sharing whole grain recipes because I believe that simple carbs effect everyone’s bodies in the same way, though perhaps to a lesser extent than mine. After this explanation, if you’re wondering why I didn’t think to grab food on the way to the basement… that would be a good question. 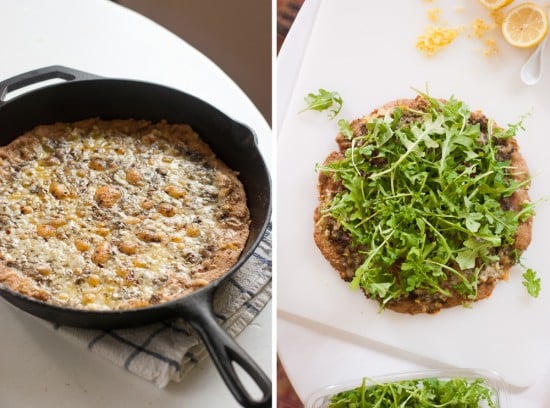 I don’t have a pizza stone, so Matt and I decided to bake the pizza in my 12-inch cast iron pan instead. It’s a great baking surface with even heat distribution and it produces a crisp crust. We stayed true to Secret Stash’s formula and used my leftover basil pesto instead of red sauce. I can’t decide which I prefer.

Our batch of dough conveniently made just enough for two pizzas. By round two, we had learned to spread the dough as thin as possible, which meant that it went up the sides of the pan a bit. We added a little less pesto and a little more mozzarella cheese. Since the Secret Stash pizza had been so deliciously lemony around the edges, I thought they might have used chopped preserved lemons, but after trying it that way, I think it may have been lemon salt instead. If you’re curious about these things, here are recipes for preserved lemons and citrus salt. 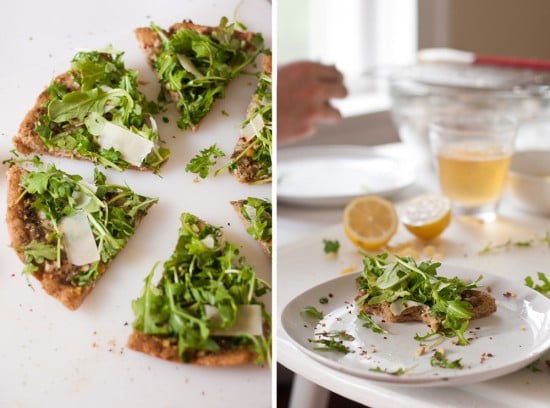 Even though this pizza isn’t exactly the same as that crazy amazing pizza in Colorado, we made it our own and I loved it. If you haven’t tried arugula on pizza before, you are missing out! Here’s our recipe below and some notes on how it could be modified.

Pesto pizza baked in a cast iron pan, topped with arugula and parmesan.