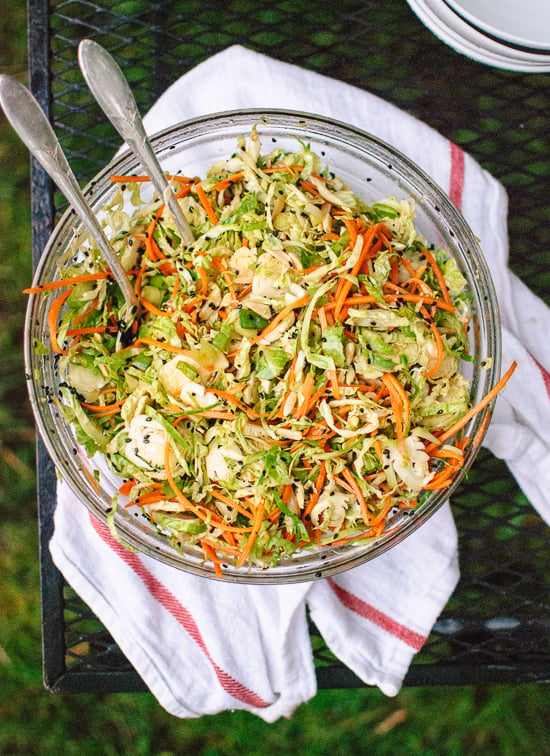 Sometimes the simplest of recipes are the most difficult to develop. Take this slaw, for example. It totally got the best of me. It was supposed to be a variation on my honey mustard brussels sprout slaw, with flavors inspired by the “cabbage crunch” slaw at Whole Foods. I sampled that slaw from the Whole Foods buffet a couple of weeks ago after my stomach started growling at me. (You know what they say about grocery shopping while hungry.) Their slaw consists of shredded green cabbage, green onions and sesame seeds tossed in a simple apple cider dressing.

My plan was to trade shredded green cabbage for the shredded sprouts in my slaw recipe, adjust the dressing and be done. Sounds easy, right? Three grocery store trips and one photo shoot in the rain later, I can tell you that it was definitely not. 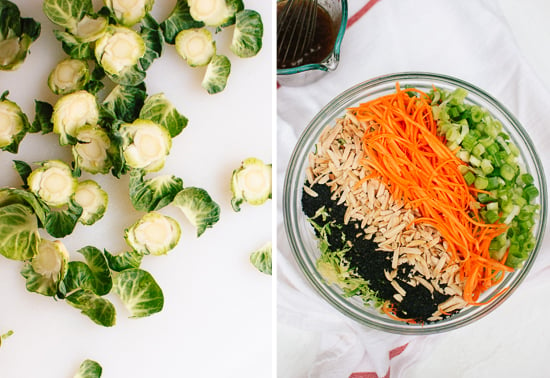 I blame the cabbage. Perhaps I bought the most waterlogged cabbage of all time. Not sure. All I know is that my shredded cabbage weeped water into that bowl so fast that my slaw was a defeated, limp, brownish-green pile of cruciferous sludge by the time I got back from my second grocery store run. I’m exaggerating, but I couldn’t send you all to potlucks with watery slaw. Oh no. My famous peanut-sesame slaw is so beloved by readers that I am called “slaw lady” in at least one American household. I can’t let my slaw fans down. 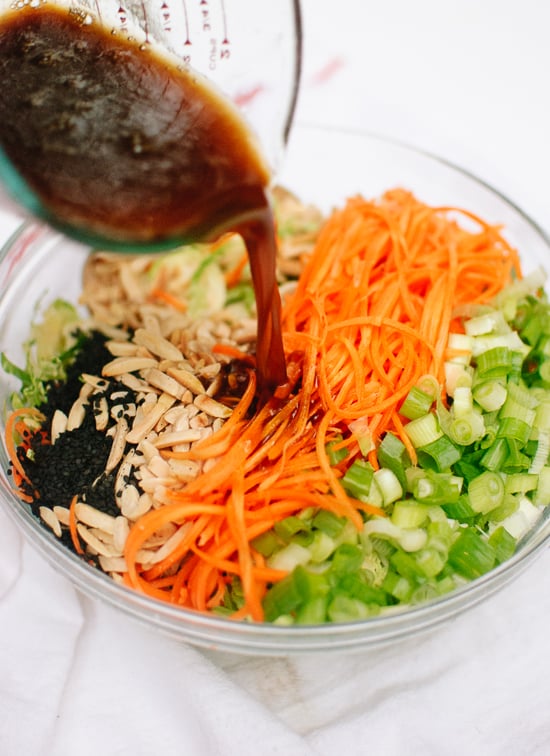 I read about a potential solution online. Apparently I could have sprinkled the cabbage with salt and sugar and let it sit for thirty minutes, then rinse the cabbage and squeeze out the excess moisture. That seemed like a lot of work for limp cabbage.

Then I recalled that my brussels sprout slaw never got soggy, so once I had the sauce part finalized, I decided to make a third grocery store run for sprouts. I needed to have this recipe done by 9 am on Thursday, so I drove to the store all groggy-eyed on Thursday at 7 am under stormy skies. I ran over a curb with an embarassingly loud ka-BOOM when I pulled out of the parking lot. The sky was even darker when I got home and I needed daylight for the photos, so I got right to work.

I started feeding sprouts through my food processor, which shreds them in seconds, and then used my handy julienne peeler, to transform the carrots into golden ribbons. (Head’s up: those are affiliate links!) After all that, I couldn’t get enough light inside, so I huddled over the slaw outside as it started to rain on me. That’s slaw dedication right there.

I believe that my hard work paid off with this slaw. It bears less resemblance to the Whole Foods slaw that inspired it, but that’s fine because this one is better. This slaw is light and crunchy with a bold soy-honey dressing, and it won’t go soggy at summer potlucks. It’s mayo-free, so it can sit outside longer than an eggy slaw (within reason, of course). This slaw would be a terrific complement to burgers and brats, but it’s plenty satisfying on its own, too! 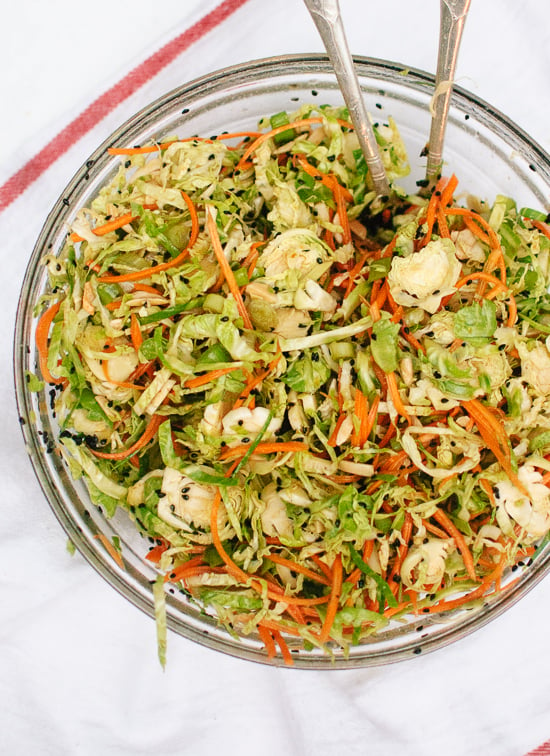 Recipe inspired by Whole Foods’ cabbage crunch slaw. Recipe adapted from my honey mustard brussels slaw.
Make it vegan: Substitute agave nectar or maple syrup for the honey.
*Make it gluten free: Make sure to use tamari, which is gluten/wheat free. Other soy sauces are not gluten free.
Make it nut free: Skip the almonds.
Storage suggestions: This salad is best consumed within a few hours but will keep for a day or so. Store leftovers in the fridge, covered. The edges of the sprouts might brown lightly over time. Wake up leftovers with a tiny splash of tamari.
Make it quick: Buy pre-shredded brussels sprouts and/or carrots. Trader Joes sells shredded sprouts (you’ll need one and a half 10-ounce bags). Skip the toasting the almonds step.
If you love this recipe: You’ll also love my honey mustard brussels slaw, peanut-sesame slaw with soba noodles and soba noodle & raw veggie salad.

P.s. This slaw is part of Self.com’s 3 Epic Picnic Salads feature! Check it out here.