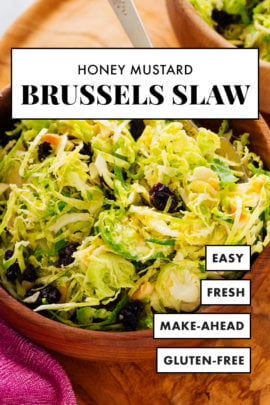 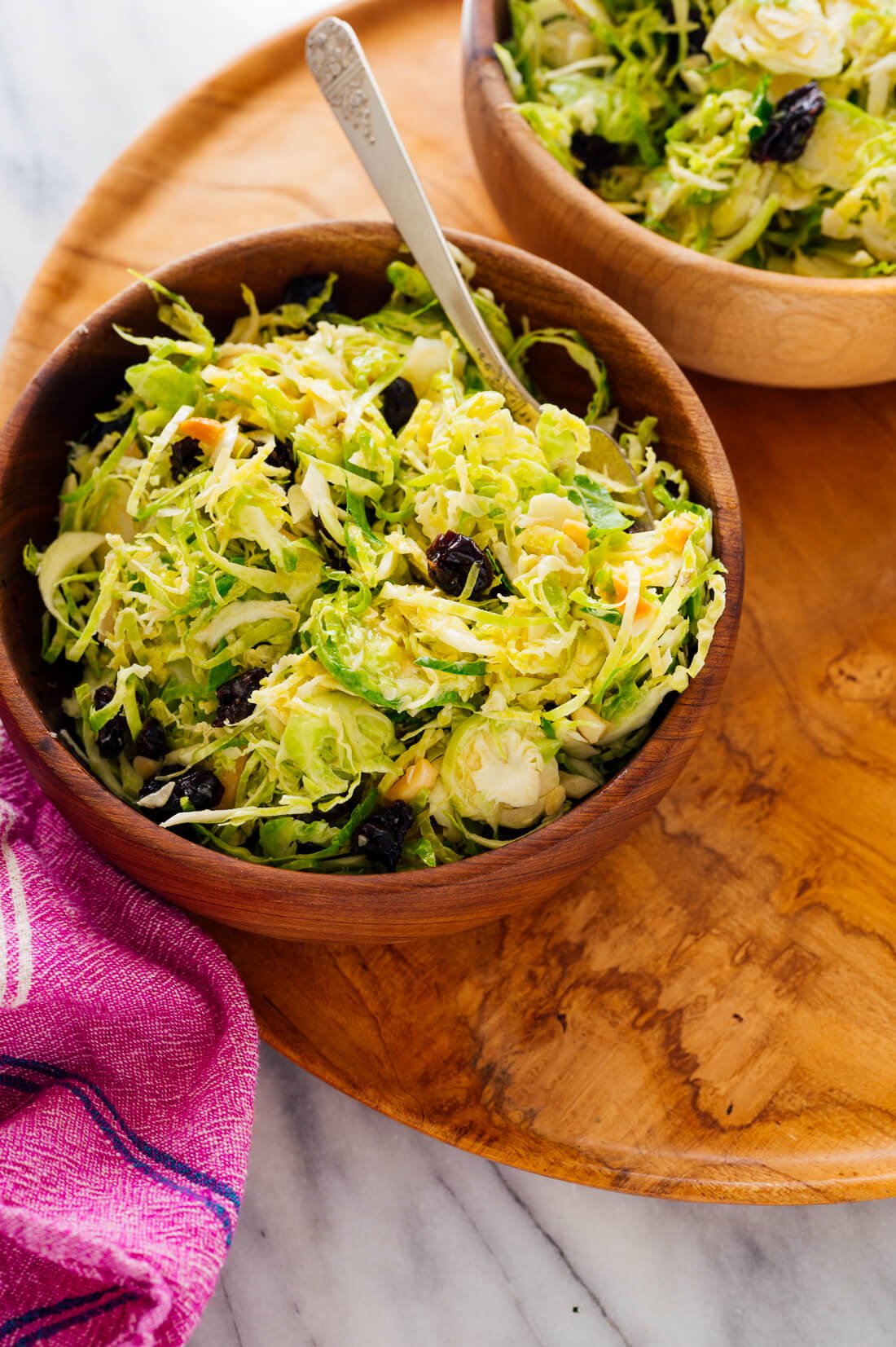 If you haven’t made this Brussels sprout slaw yet, you’ve been missing out! There’s a good chance you’ve missed this recipe, since it’s been hiding in the archives under some not-so-appetizing photos. I hope these are more enticing.

This slaw is irresistibly crisp and tangy, with a simple honey-mustard dressing. Freshly toasted almonds offer some savory crunch, and dried cherries (or cranberries) send it over the top. 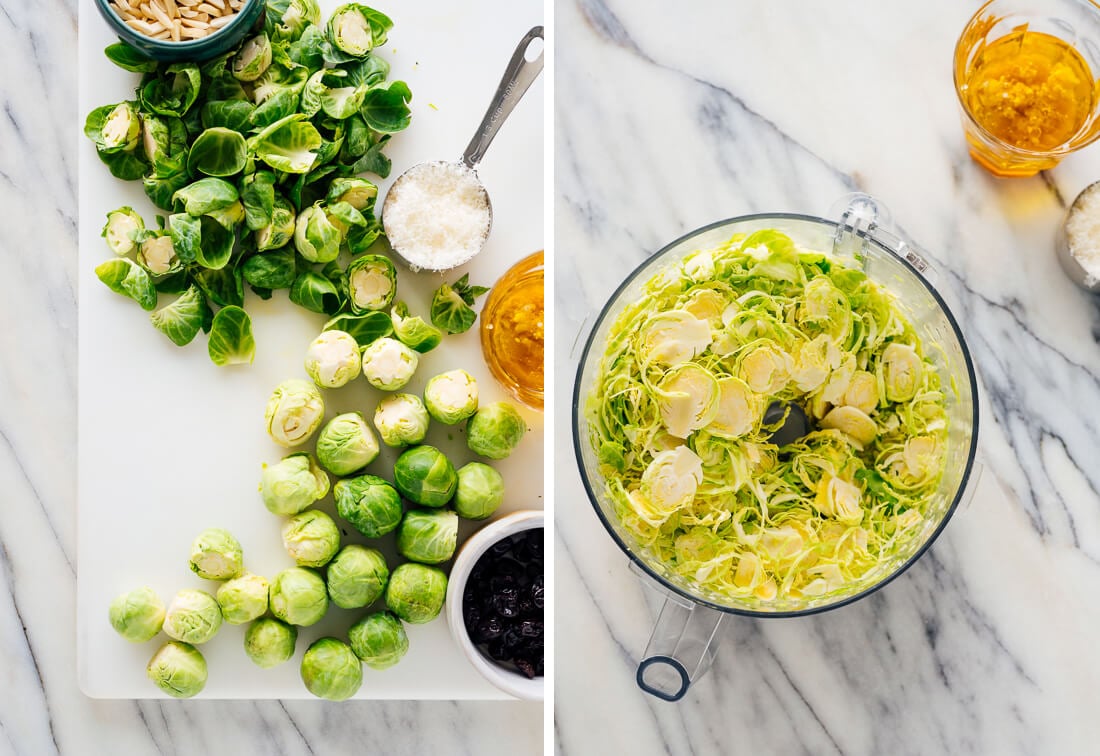 This slaw stores well in the fridge for a few days, so it’s great to keep on hand for sandwiches, soups and quick meals.

It’s easy to make, too—especially if you have a food processor with a shredding attachment. Otherwise, you can thinly slice the Brussels sprouts by hand. Let’s get to it! 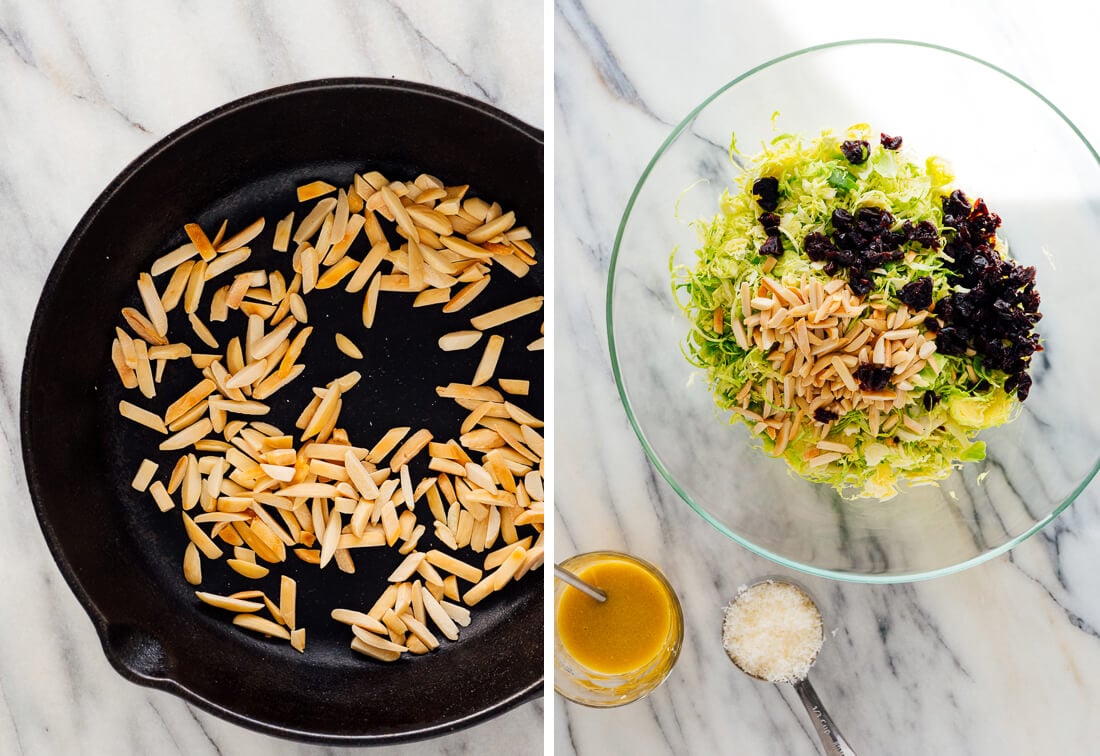 Recipe development notes from 2013 (the referenced restaurant has since closed):

I never ate coleslaw as a kid so it’s a novelty to me now. I always avoided the mysterious mayonnaise-laden salads at potlucks (what was hiding under there?). Looking back, I suspect that I missed out on a few wonderful slaws and a lot of terrible Jell-O salads. Oh well.

Coleslaw got my full attention on a warm night this summer. A few friends and I drove to Justus Drugstore, a family-owned, former-drugstore-turned-gourmet-restaurant in a quaint town outside of Kansas City. We sat on the patio, which has a more casual menu than the inside. Three swanky cocktails later, our food arrived.

My veggie burger came with a side of coleslaw. I took a bite and my taste buds did a little happy dance. That slaw was something else. It was crisp, fresh, tangy and sweet all at once. It teetered on the border of being too sweet or too tangy but never fell off the edge. It was perfect.

I’ve been obsessed with recreating the Justus coleslaw experience ever since. I called and asked the hostess to read the ingredients off the menu for me (house-made pear cider, vinegar pickled celery root, ginger and pickled carrot), but their slaw didn’t seem feasible for home cooks. I’ve since made bowls and bowls of vinegar-based cabbage coleslaw but none satisfied like the Justus slaw.

The other day, I noticed two of my real-life friends tweeting about a salad, so of course I had to know more about it. It was a Brussels sprout and arugula salad with honey mustard dressing at The Mixx, one of my favorite places in town. Being me, I had to try the salad immediately.

While I was happily chomping away on that giant Brussels salad, it occurred to me that shredded Brussels would make a great substitute for the finely shredded celery root in the Justus slaw. Then I thought that an emulsified mustard dressing would be nice and creamy, almost like mayonnaise. Ta da! This salad was born. 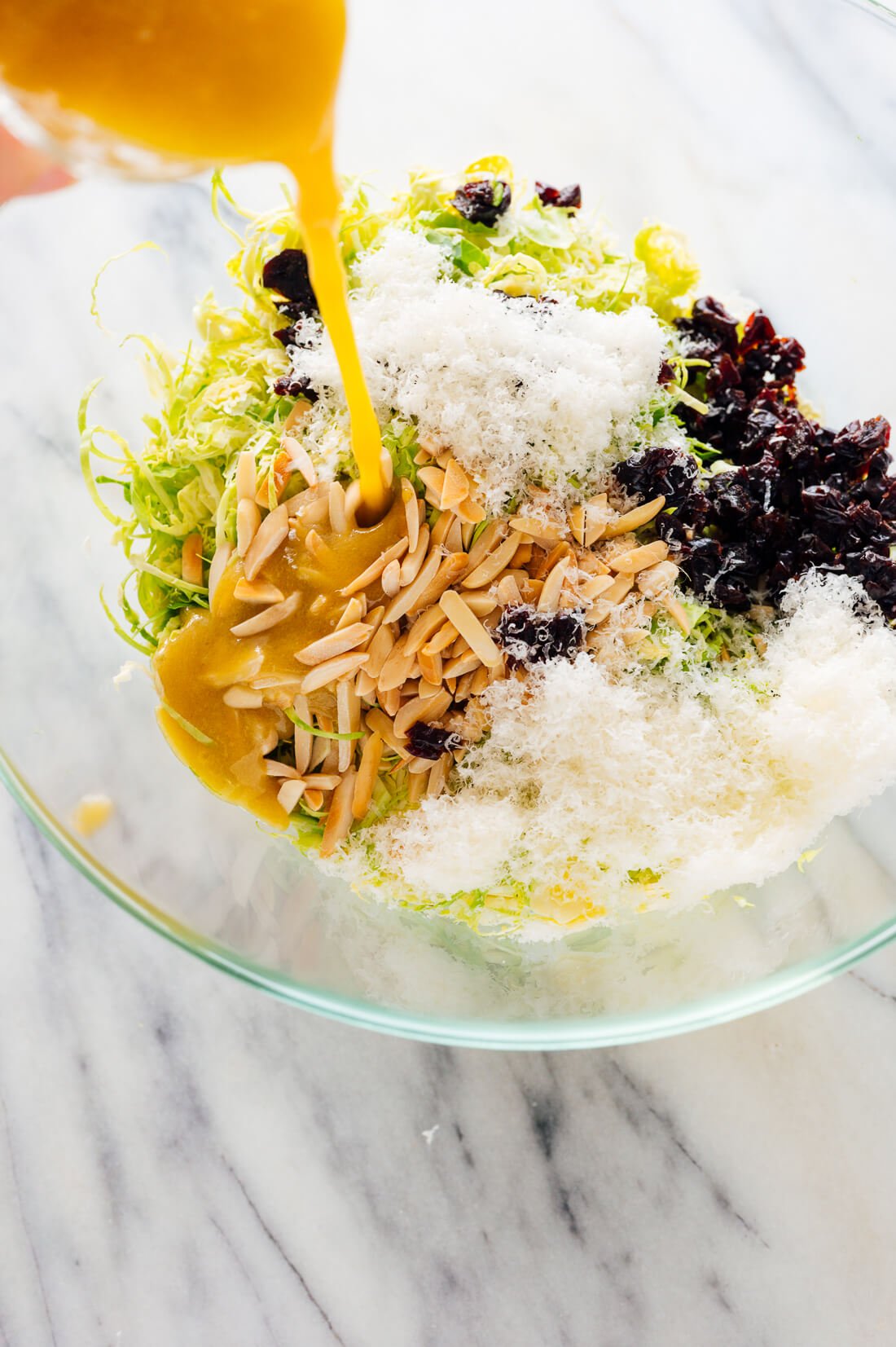 What to Serve with Brussels Sprout Slaw

This slaw is a great gluten-free salad or side dish. Brussels sprouts are generally best during the cooler months, so this recipe is perfect for fall/winter potlucks and holiday meals (such as Thanksgiving).

Here are some serving suggestions: 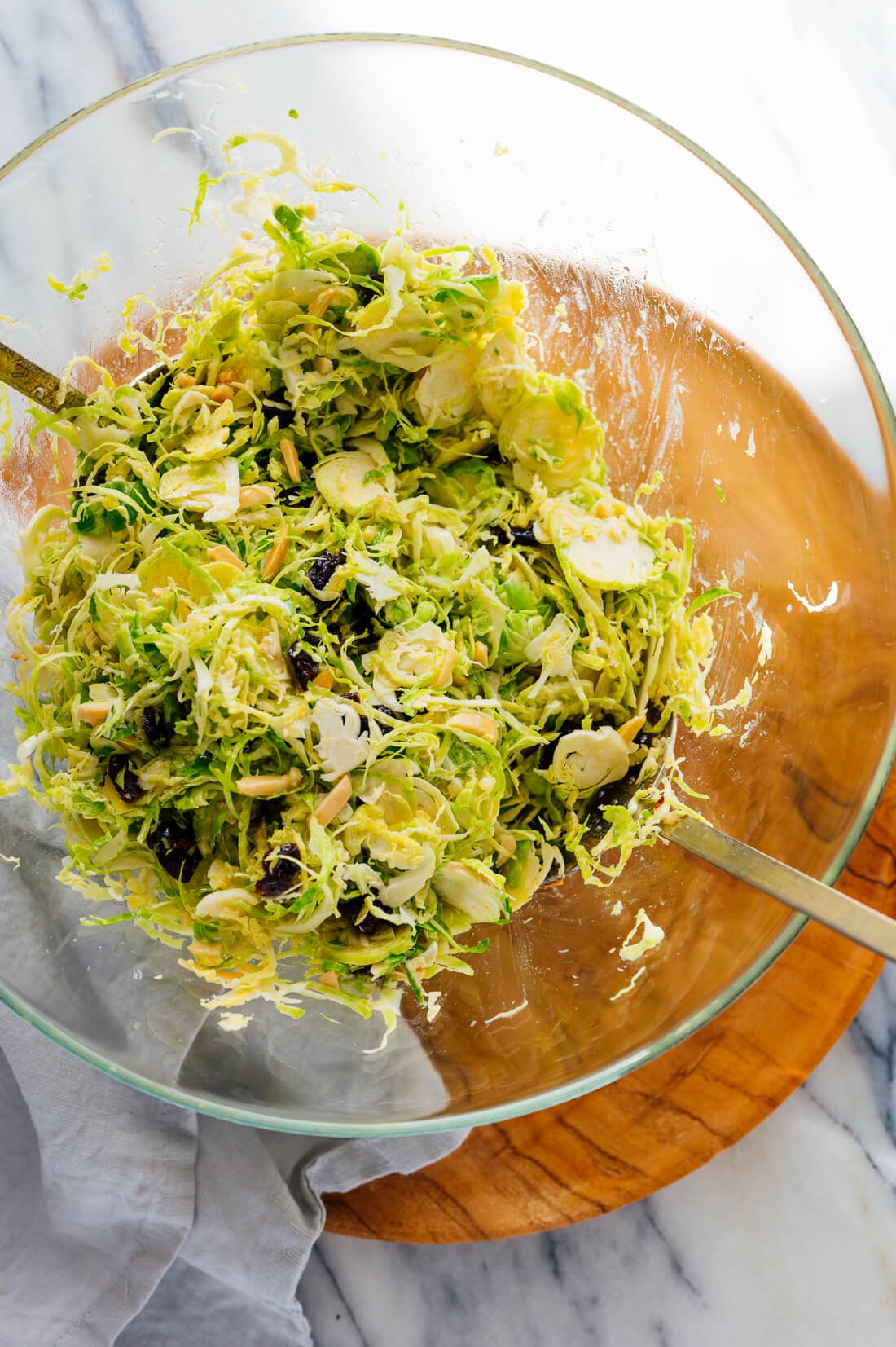 Please let me know how your slaw turns out in the comments! I love hearing from you. 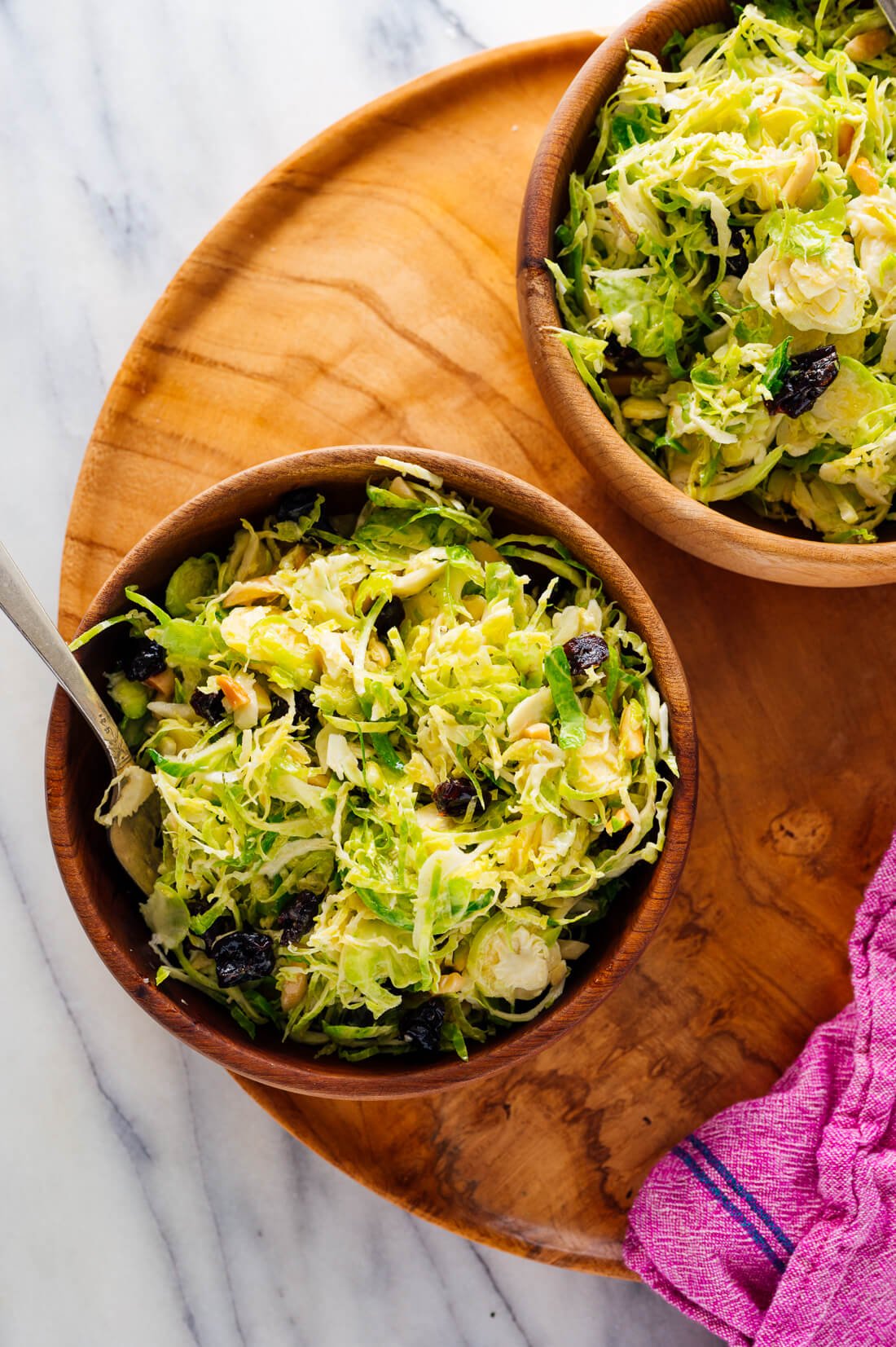 Recipe inspired by the Justus Drugstore patio’s coleslaw and the seasonal Brussels sprout salad at The Mixx.
Make it dairy free/vegan: Skip the Parmesan, or substitute vegan Parmesan, or try mixing a little bit of white miso into the dressing to make up for it. For vegan slaw, also substitute maple syrup for the honey.
Make it nut free: Omit the almonds, and perhaps add pepitas or sunflower seeds if desired.