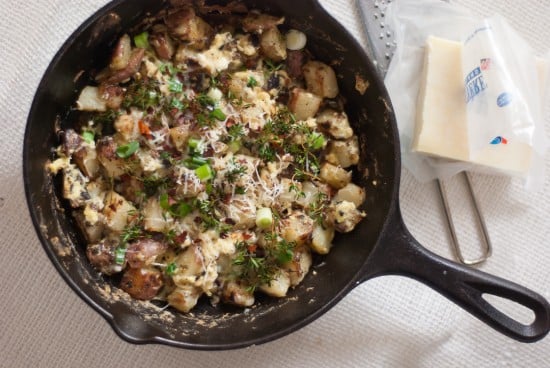 Well, the holidays have snuck up on me once again and Christmas is just around the corner. Fortunately, my list of loved ones to buy for is a short one this year and I feel prepared. I don’t have stressful decisions to make about what to buy my non-existant significant others’ family members, and for that I am glad. Truly. Sometimes I bemoan the fact that I am single, but I relish it just as often. Sometimes I don’t want to be alone—like when I’m driving to Kansas City and my iPhone fails me, leaving me to find my way with no phone numbers and only half of my friends’ address—but at other times I want to be alone, like when it’s just me, this breakfast in a skillet, and a fork. Singledom at its finest!

This recipe has been adapted from Pam Anderson (no, not that Pamela Anderson), who recently published a cookbook called Cook without a Book: Meatless Meals. I almost called it a non-cookbook because she presents vegetarian meal concepts, rather than precise recipes, and provides tips and flavor combinations that go with it.

I love this way of cooking because it’s realistic—I almost never follow recipes exactly, because I don’t want to make an extra trip to the store or because my taste buds prefer a different flavor. I think it’s an especially great concept for a vegetarian cookbook because so many who want to cook more meatless meals do not know where to begin. Pam’s cookbook provides plenty of family-friendly vegetarian cooking inspiration along with endless flavor combinations to try. 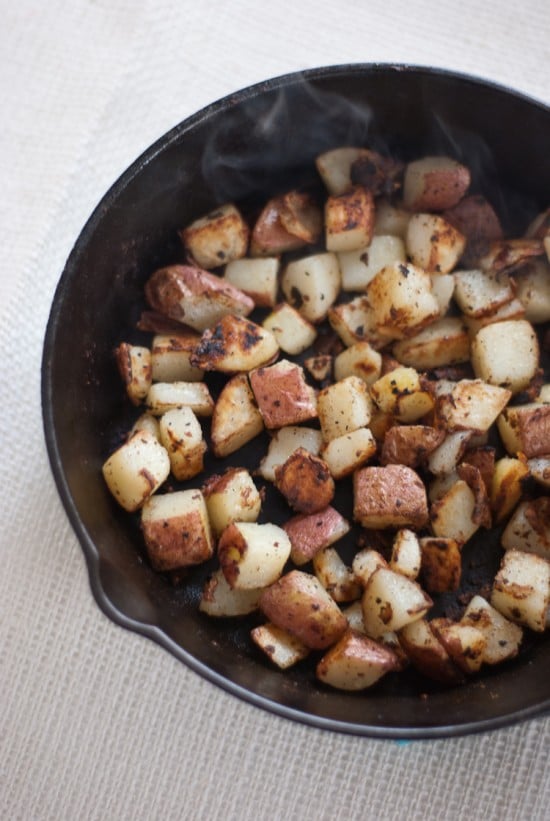 I was drawn to Pam’s recipe for this egg and potato scramble because it was easy to scale down for breakfast for one. I’ve mentioned before how much I adore breakfast—it’s the only thing that gets me out of bed in the morning—and on the weekends I love spending lazy mornings making myself a good meal. Sometimes I want a quick, savory breakfast instead of sweet waffles or pancakes, and this scramble was just right.

I appreciate Pam’s technique for quick steaming the potatoes, which speeds up the potato cooking process and means that I can now whip up a breakfast club-quality meal for myself in twenty minutes! Her breakfast scramble is not unlike the “veggie kitchen sink” I enjoyed for brunch at Succotash in Kansas City this past weekend. It’s basically like mixing together two of my favorite Breakfast Club menu items (home fries and scrambled eggs) in one skillet, for one. I’m a big fan. 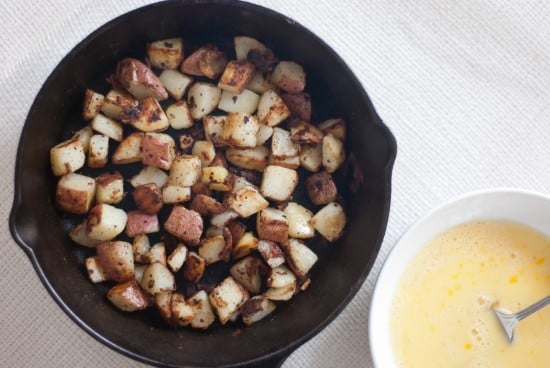 The recipe below is Pam’s original, which serves two people. I scaled it down for one by cooking two medium red potatoes and two scrambled eggs in an 8-inch cast iron skillet. In fact, Pam’s breakfast scramble was so good, I couldn’t resist eating it straight from the pan (and thankfully, no one was around to watch)! 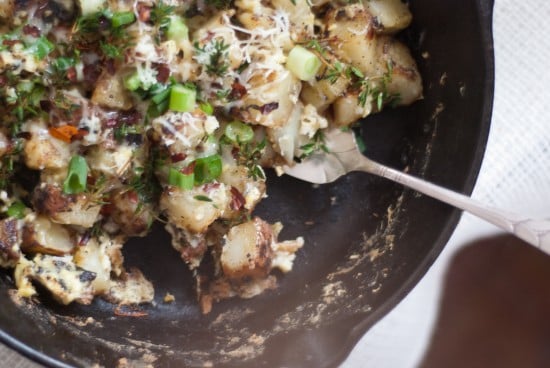 You’ll love this breakfast scramble! It’s an easy, versatile, one-skillet breakfast filled with scrambled eggs, home fries, herbs and cheese. It’s like all my favorite things about breakfast in one skillet.

Adapted from Cook without a Book by Pam Anderson.
Variations to try: extra sharp cheddar with fresh dill, feta or goat cheese with oregano (add diced roasted red pepper), pepper jack and cilantro (perhaps add black beans and a side of salsa), or Swiss and paprika.