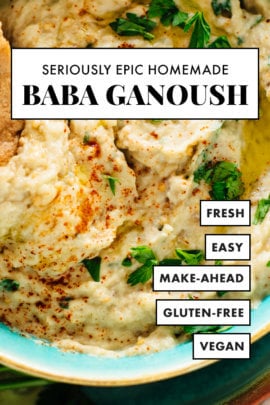 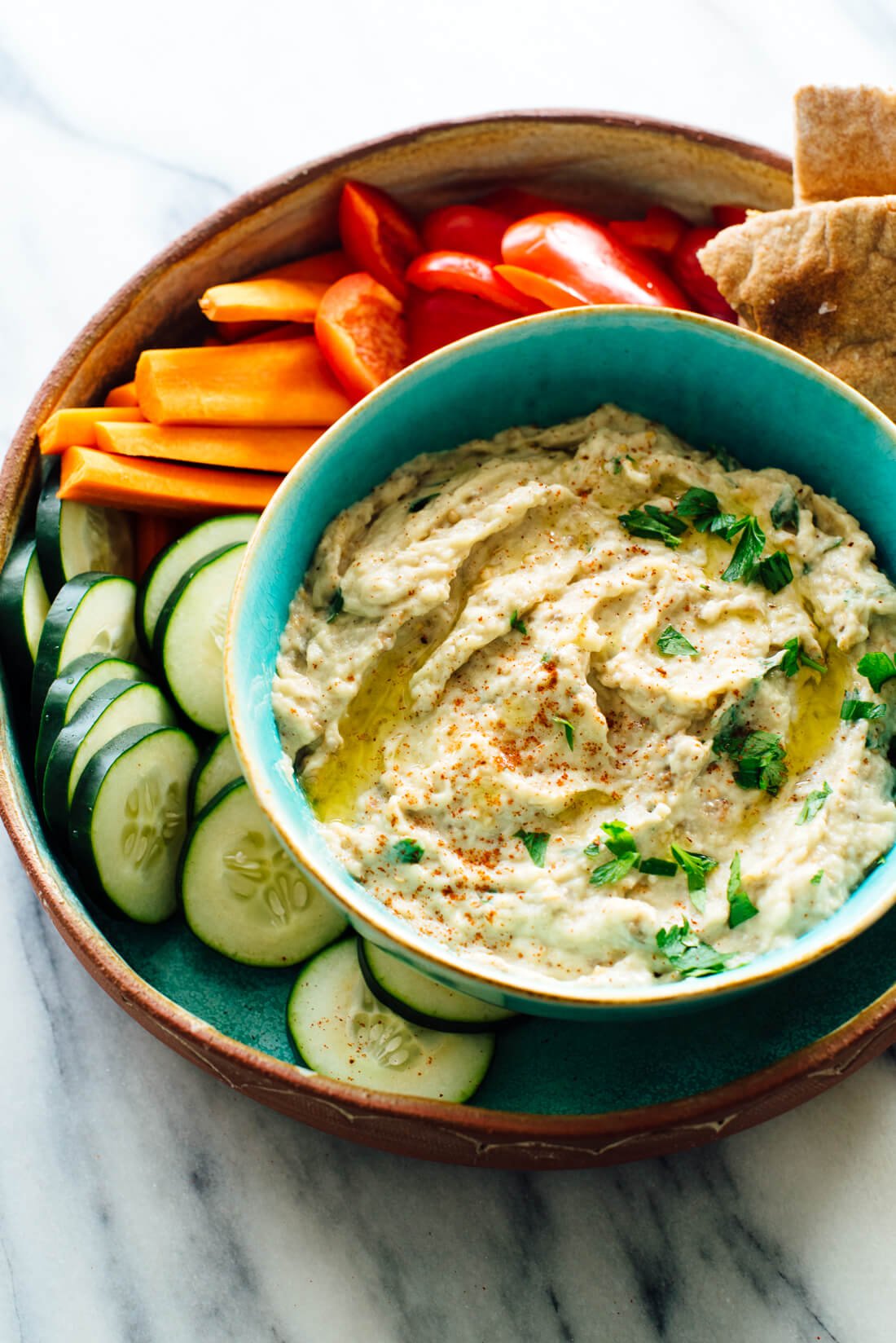 “But why would I make baba ganoush if I could just eat hummus?” Mara asked when we set out to make the ultimate baba ganoush recipe. At that moment, I couldn’t help but shrug my shoulders.

Then we nailed the method and ingredients you see here, and neither of us could stop scooping up more. When you get it right, baba ganoush is irresistibly smooth and luxurious, smoky, and savory. 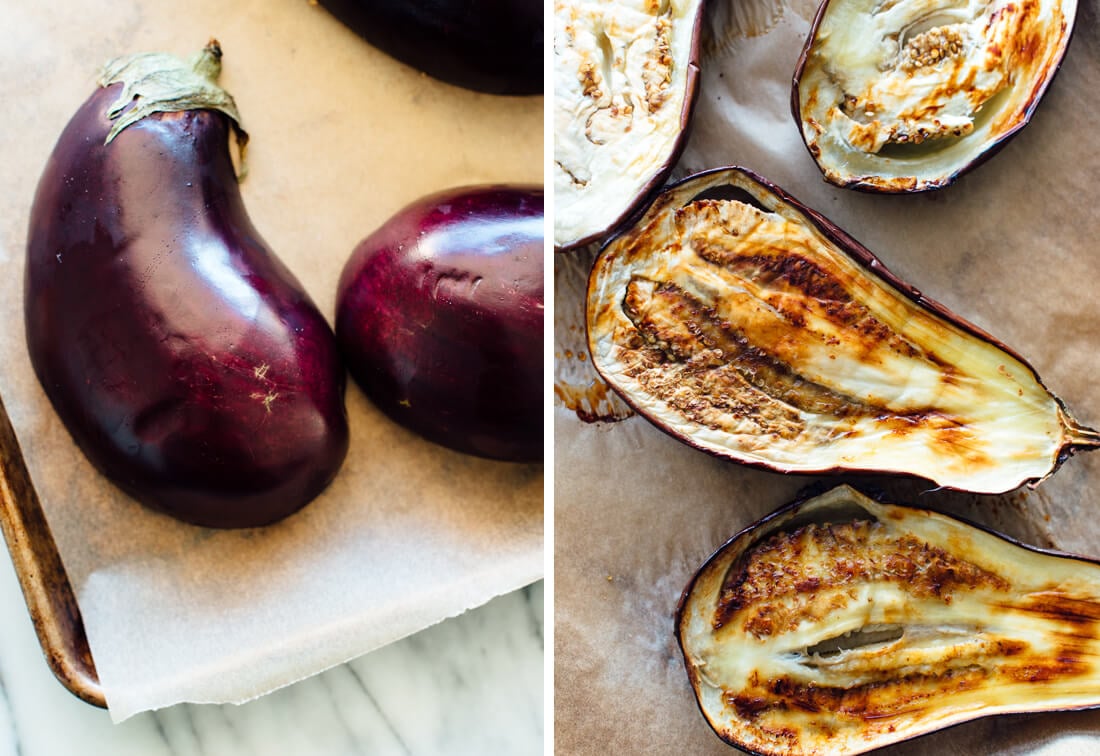 In its most basic form, baba ganoush is made with eggplant, tahini, olive oil, lemon juice, garlic and salt. I found that adding a tiny bit of ground cumin, smoked paprika and fresh parsley takes it to the next level.

Baba ganoush is similar to hummus, but it calls for grilled or roasted eggplant instead of chickpeas. Both dips originated in the Eastern Mediterranean, and they’re often served together with pita bread and raw, crisp veggies. You can use baba ganoush like you would hummus—as a dip or spread. Ready to make some?! 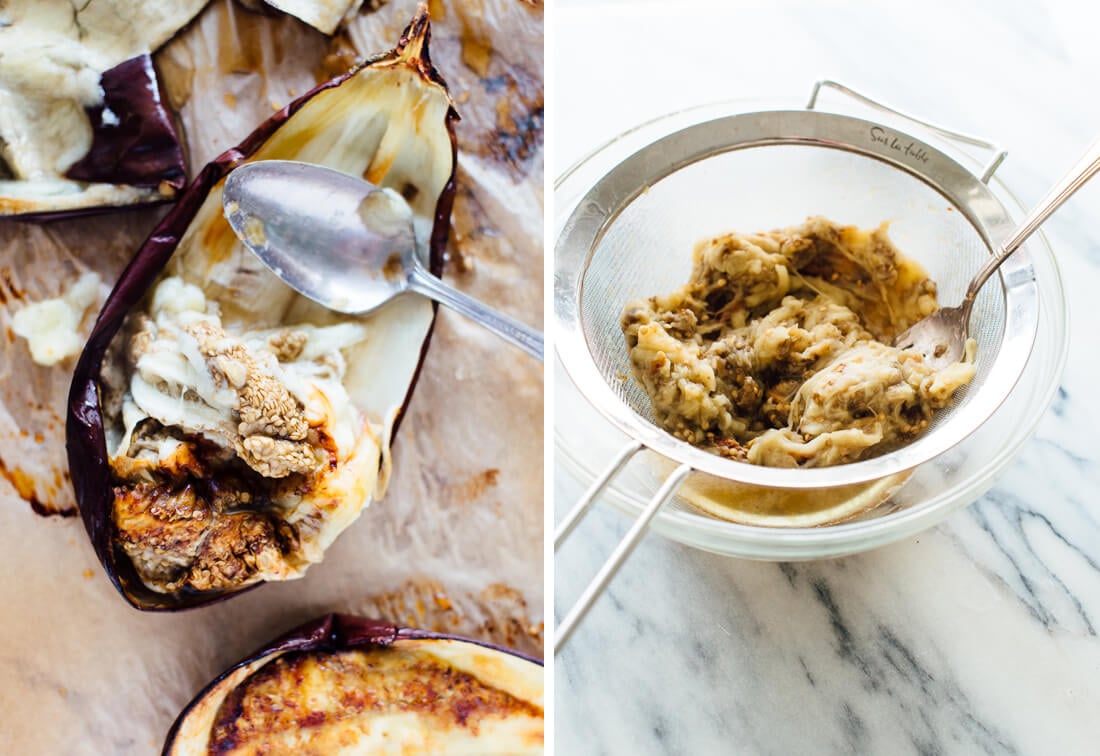 How to Make the Best Baba Ganoush

There are a few considerations when it comes to baba ganoush. First up: do you grill the eggplant or roast it?

I don’t have a grill, so I roasted my eggplant and it turned out great. So, you don’t need a grill for this baba ganoush!

To make up for the grilled flavor, I halved the eggplants and roasted them cut-side down for caramelized deliciousness. (Roasting them halved also means that your eggplant cooks faster, and you don’t risk an entire eggplant exploding inside your oven.) Using smoked paprika as a garnish adds some extra smokiness, too.

Roasting the eggplants until they’ve collapsed on themselves helps concentrate their flavor and ensure that your dip is silky-smooth. At that point, it’s easy to flip over the eggplant and scoop out the insides. Peeling the skin off eggplant is not my idea of a good time! 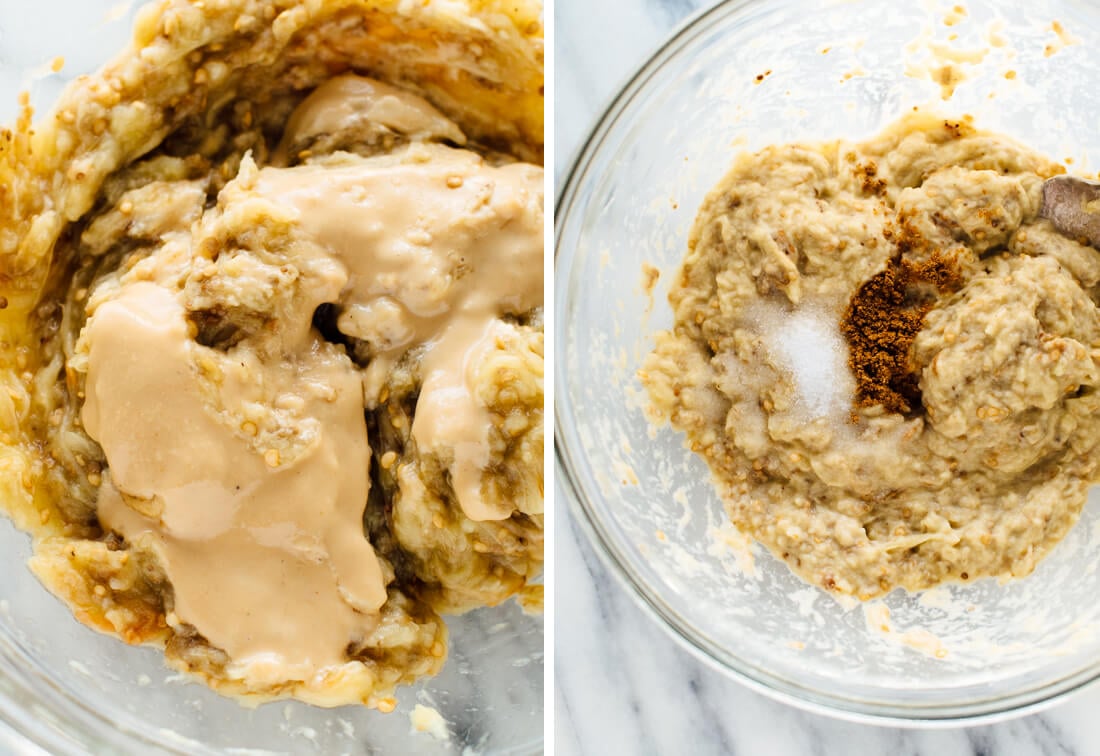 The next consideration is how to extract as much moisture from the eggplant as possible. Fortunately, our roasting method has already helped eliminate a lot of it. Just let the eggplant rest in a strainer for a few minutes and stir it to release even more.

The next question—do you mix the dip by hand or whip it up in your food processor? I’m a big fan of my food processor, but it isn’t necessary for this recipe. Baba ganoush traditionally has some texture to it, and roasted eggplant readily falls apart when you stir it with a fork.

My last tip is to salt the dip generously—eggplant is inherently bitter, and salt reduces that bitterness. This dip isn’t truly epic until it’s properly seasoned with salt. Can I call my own recipe epic? Oh hell, I’m doing it! This baba ganoush is epic.

Watch How to Make Baba Ganoush 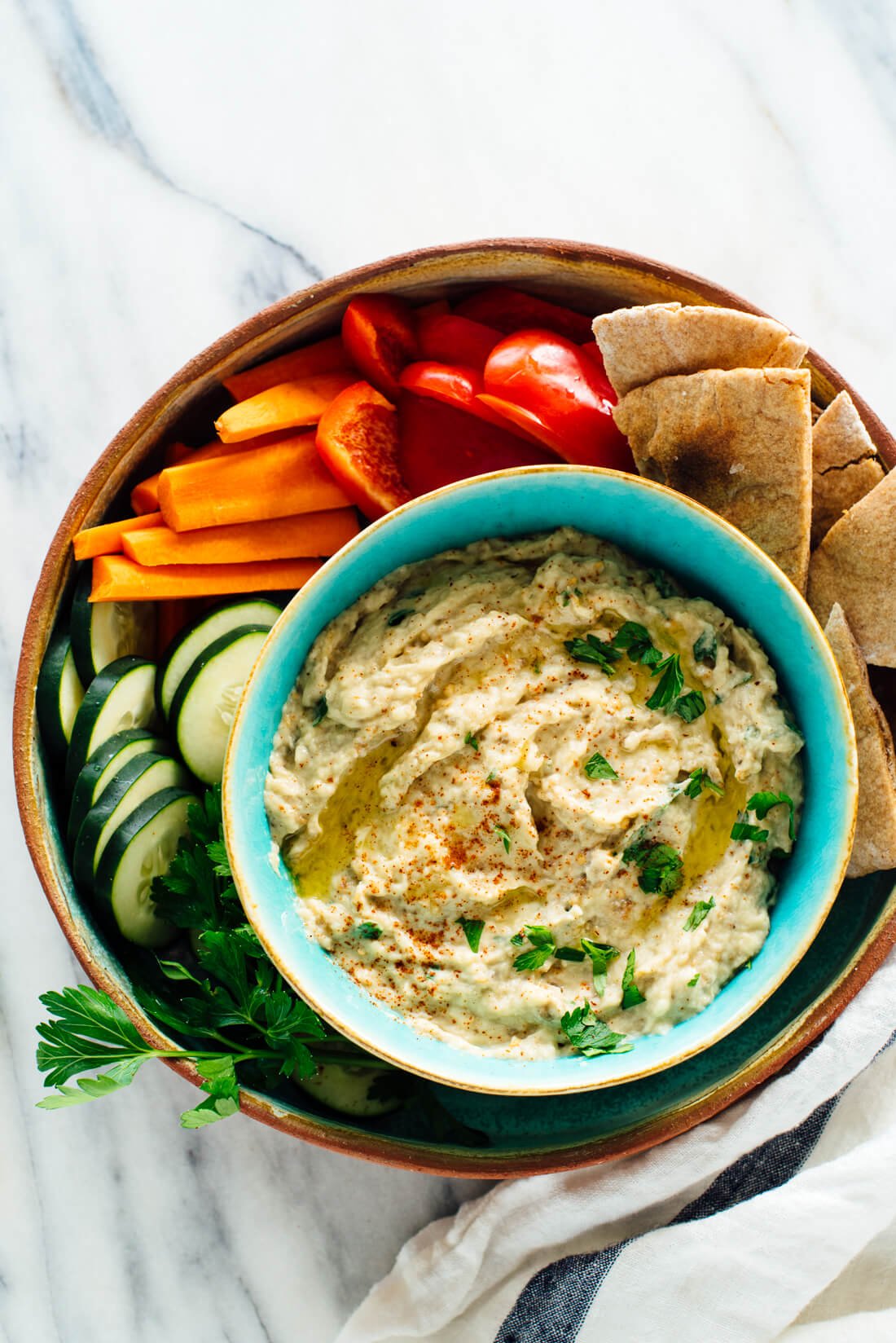 What to Serve with Baba Ganoush

Basic baba ganoush is always vegan, gluten free and nut free. That makes baba ganoush a great party appetizer for guests who are following special diets—as long as your accompaniments fit the bill.

I like to serve my baba ganoush with sturdy raw veggies like carrot sticks, cucumber rounds and bell pepper sticks. Toasted pita wedges or pita chips are great, too. 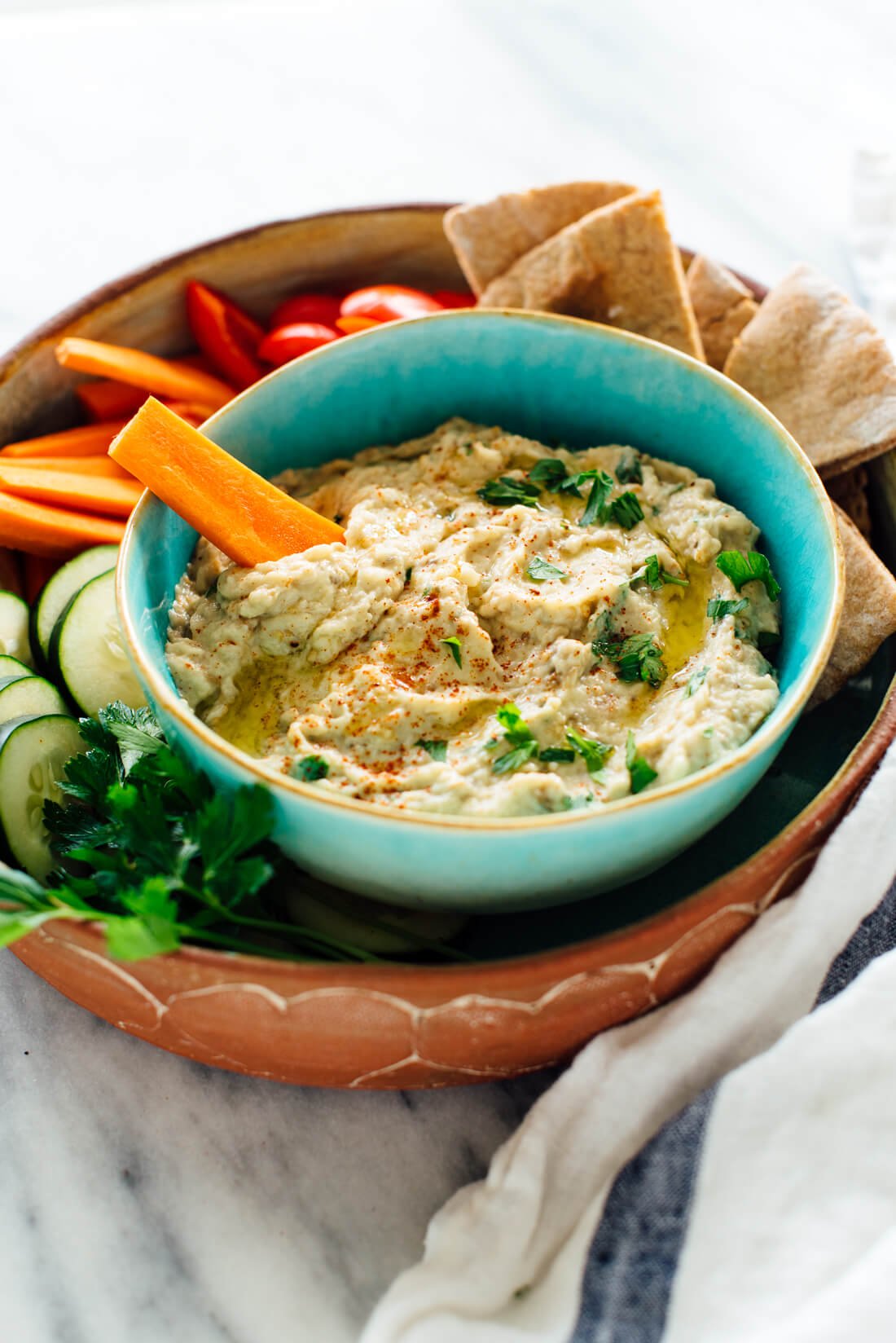 Please let me know how this baba ganoush recipe turns out for you in the comments! I hope it’s your new favorite. 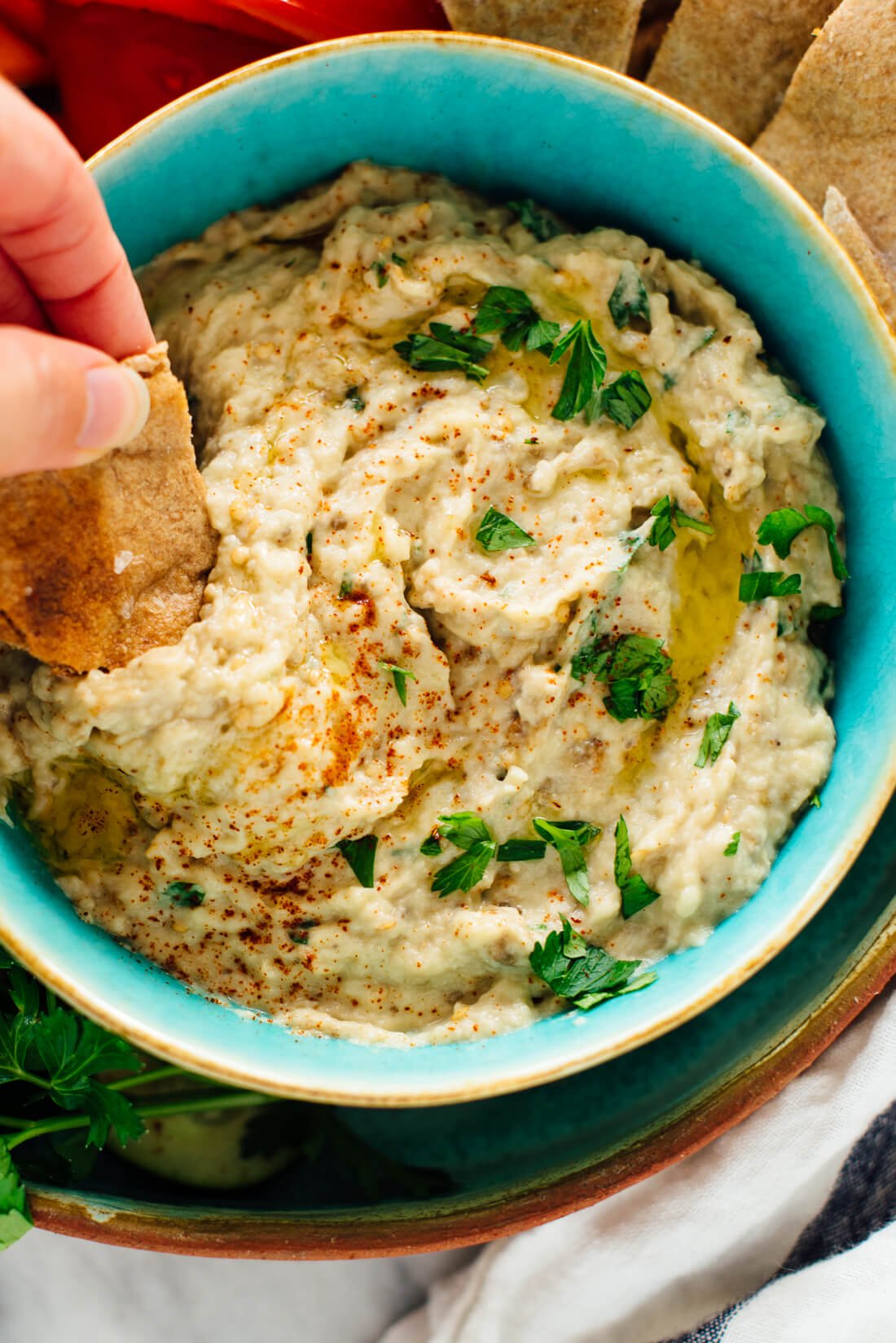 This baba ganoush recipe is the best! It’s easy to make, too (no food processor required). You’ll need eggplant, tahini, olive oil, lemon juice, garlic and spices. Recipe yields about 1 ¾ cups (enough to serve 4 to 6 as an appetizer).

*Eggplant selection: Large eggplants tend to contain more seeds, which can produce a bothersome texture. So, it’s better to use 2 small eggplants that weigh about 2 pounds total, rather than 1 large. Choose eggplants that are shiny and smooth (no mushy parts), and feel heavy for their size. Turn your eggplant into baba ganoush promptly, since overripe eggplant tastes more bitter.

Storage suggestions: Leftover baba ganoush can be stored in an airtight container in the refrigerator for about 4 days (I think it’s best served fresh, but some say it tastes better after a day or two). I like to let my leftover baba ganoush warm to room temperature before serving, but others prefer it chilled, so I’ll leave this up to you.

For a lighter dip: You can reduce the olive oil to as little as 2 to 3 tablespoons. Your dip won’t be as rich and creamy, but it will still be very good!