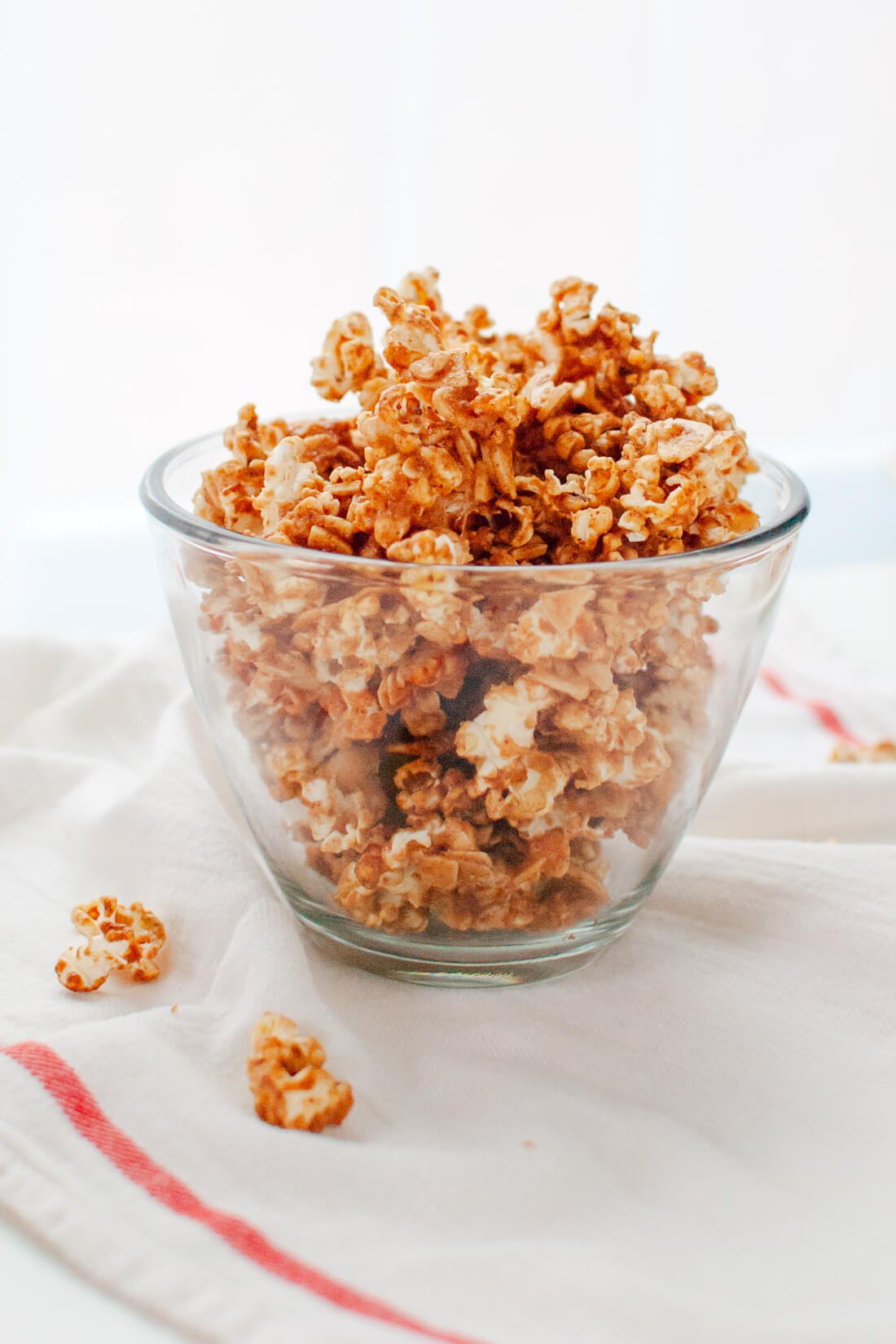 It’s been two days since I published my gift guide and I’ve made no progress on my holiday shopping list. I have, however, consumed lots and lots of this simple, maple-sweetened caramel corn. I can’t help myself!

This is the one time of year that I wish I worked at an office, just for the homemade, powdered sugar-dusted cookies and chocolate peanut butter buckeyes. 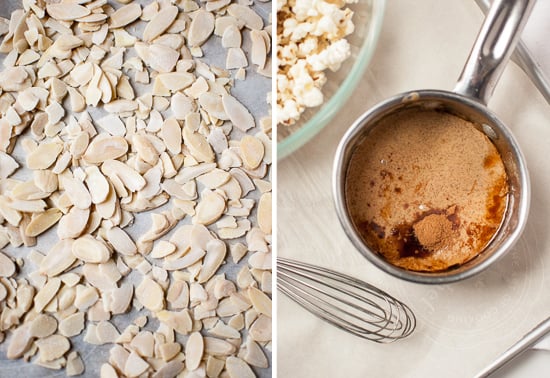 I’ve managed to appease my holiday cravings with my own homemade treats. Case in point? This popcorn. It’s dangerously easy to make and I’m powerless in the presence of its salty-sweet, cinnamon-flavored crunchiness.

Most caramel popcorn is made with corn syrup, which is an ingredient I’d rather avoid, plus a lot of butter. This healthier, dairy-free, homemade version is made simply with reduced maple syrup, nut butter, spices and the best stovetop popcorn. And it is delicious. 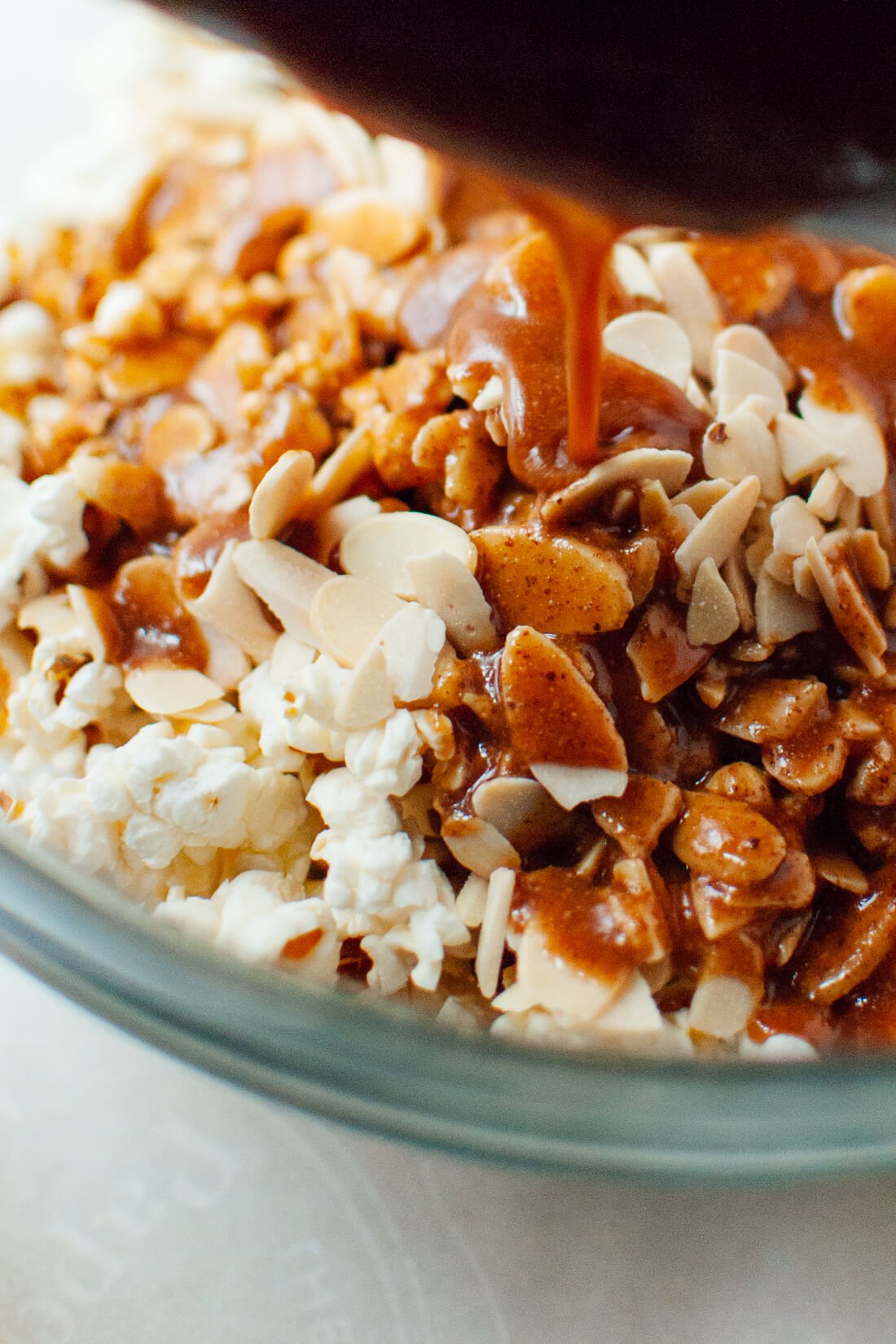 Feel free to change up your caramel popcorn! I added toasted, sliced almonds to match the almond butter, but you could leave out extra nuts or substitute your favorite (I bet pecans would be great). Once you’ve mixed the maple syrup mixture into the popcorn, you could add in some mini chocolate chips, cranberries, toasted coconut, sprinkles… anything that sounds good. 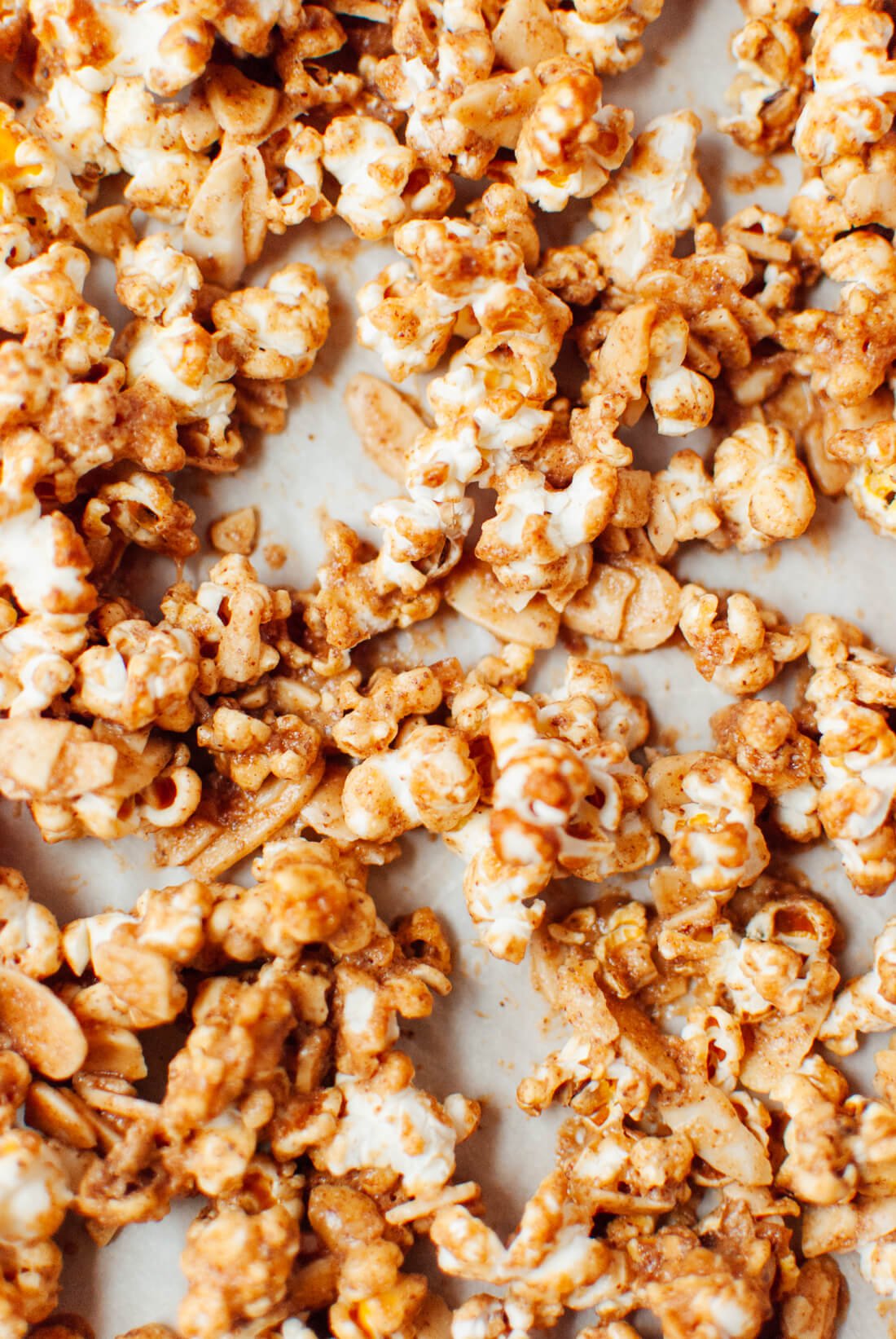 Some notes on alternative sweeteners: If you don’t have maple syrup at home, it is possible to make this caramel corn with honey. I tried it and, as usual, the honey browned too quickly in the oven. I would suggest reducing your oven temperature to 325 if you want to try honey-sweetened caramel corn. You might need to bake it a minute or two longer, but keep a careful eye on it so it doesn’t start to burn. 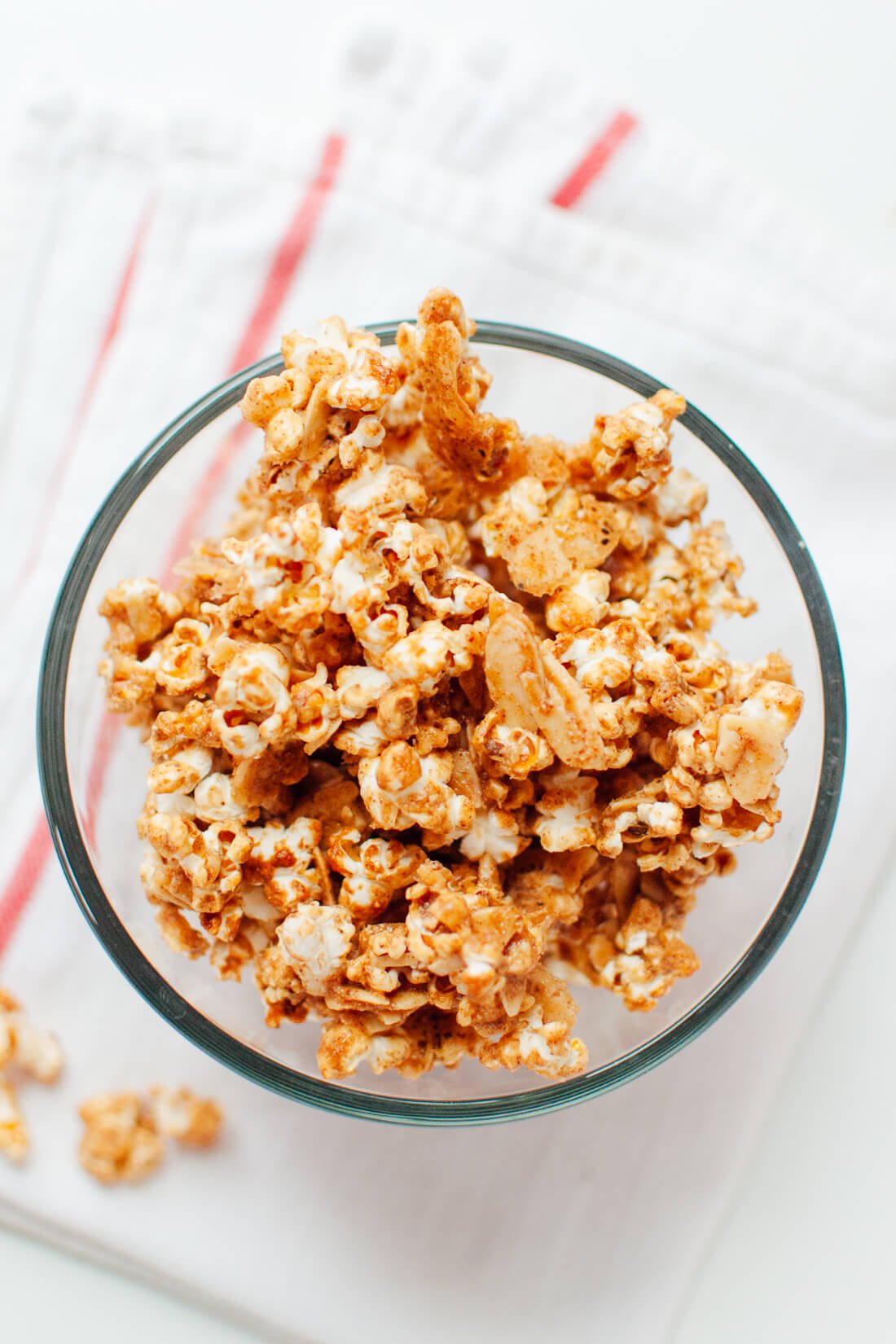 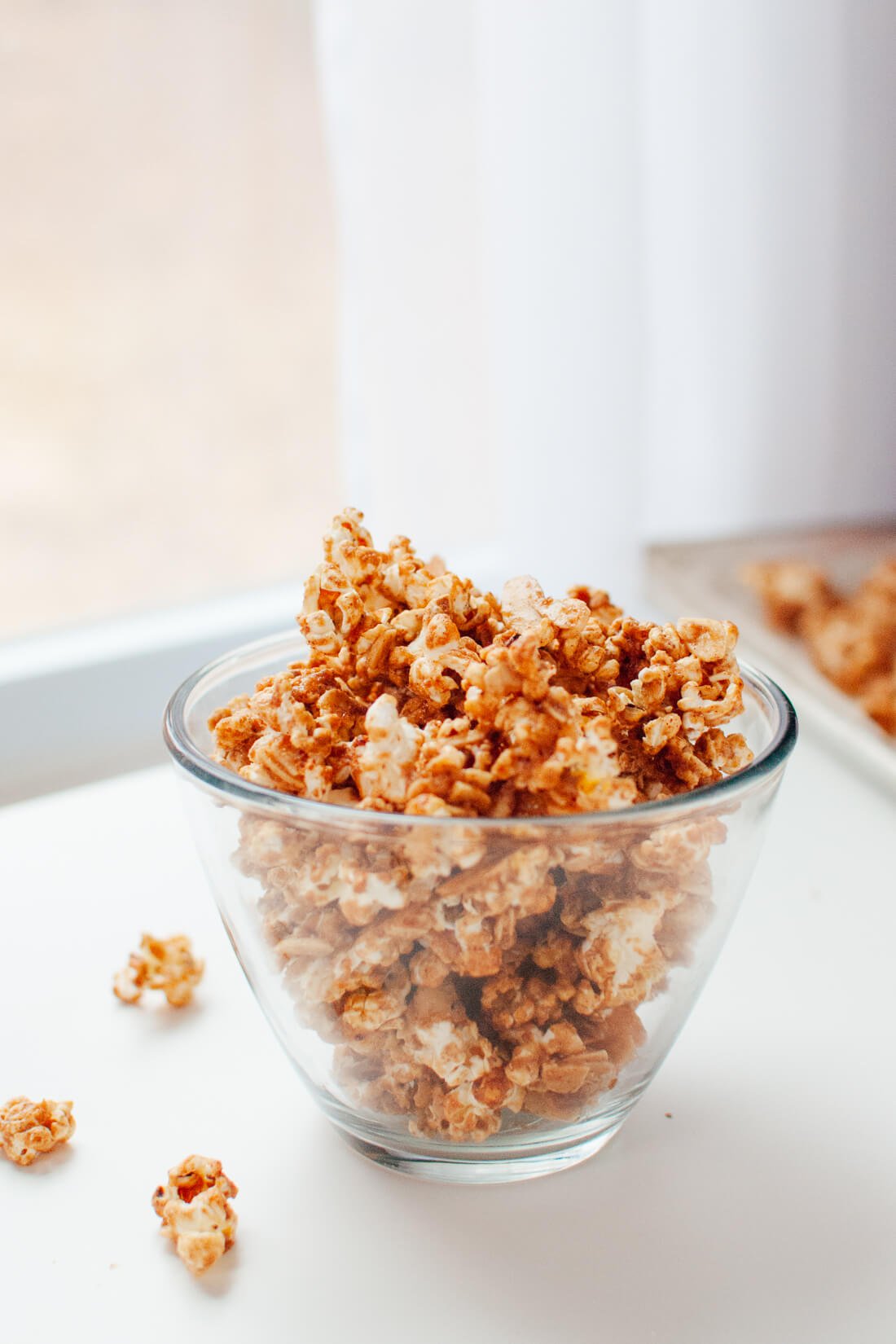 Naturally sweetened caramel popcorn made with maple syrup and almond butter! This healthier, vegan caramel corn is really easy to make. Feel free to use any nut butter you’d like. Recipe yields about 6 cups caramel popcorn.

Recipe adapted from At Home in the Whole Food Kitchen by Amy Chaplin.

Make it nut free: I think sunflower butter would work in place of the almond butter, but I haven’t tried. You’ll also want to skip the toasted nuts or use toasted pepitas or sunflower seeds instead.

Storage suggestions: This popcorn is best when fresh, but it keeps well in a sealed plastic bag (squeeze out as much air as possible) for a few days.

Change it up: You can do so many things with this recipe! Use a different nut butter and different nuts. Toss in dried cranberries, tiny chocolate chips and/or toasted shredded/flaked coconut while the mixture is wet. Use different spices (I think spicy curry powder could be great!)