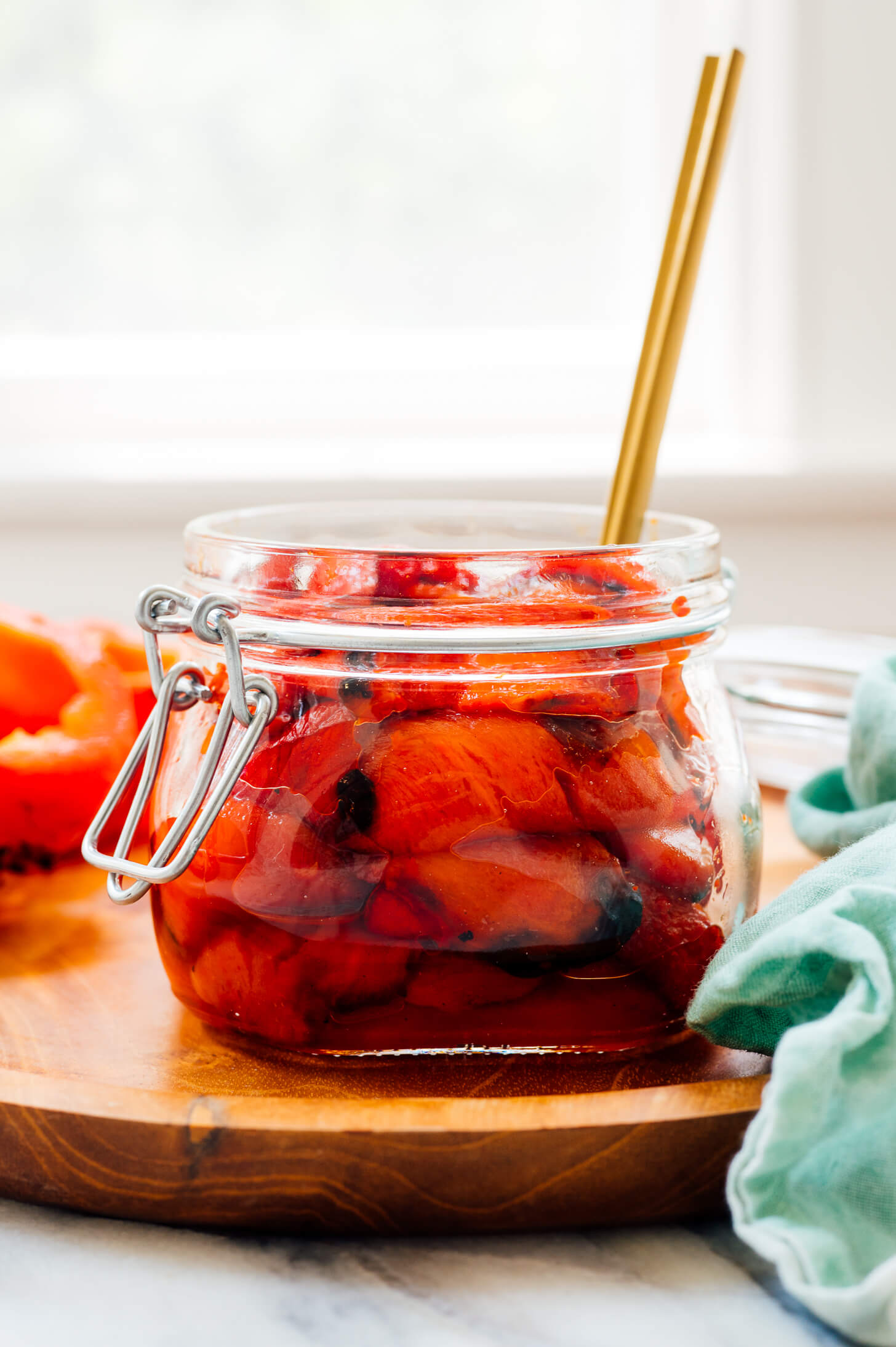 Homemade roasted red peppers taste the best, no doubt about it. Since it’s bell pepper season, I’m sharing my tested and perfected roasted red pepper recipe. Now that I’ve finally nailed down all the factors, I’ll be roasting my own more often! 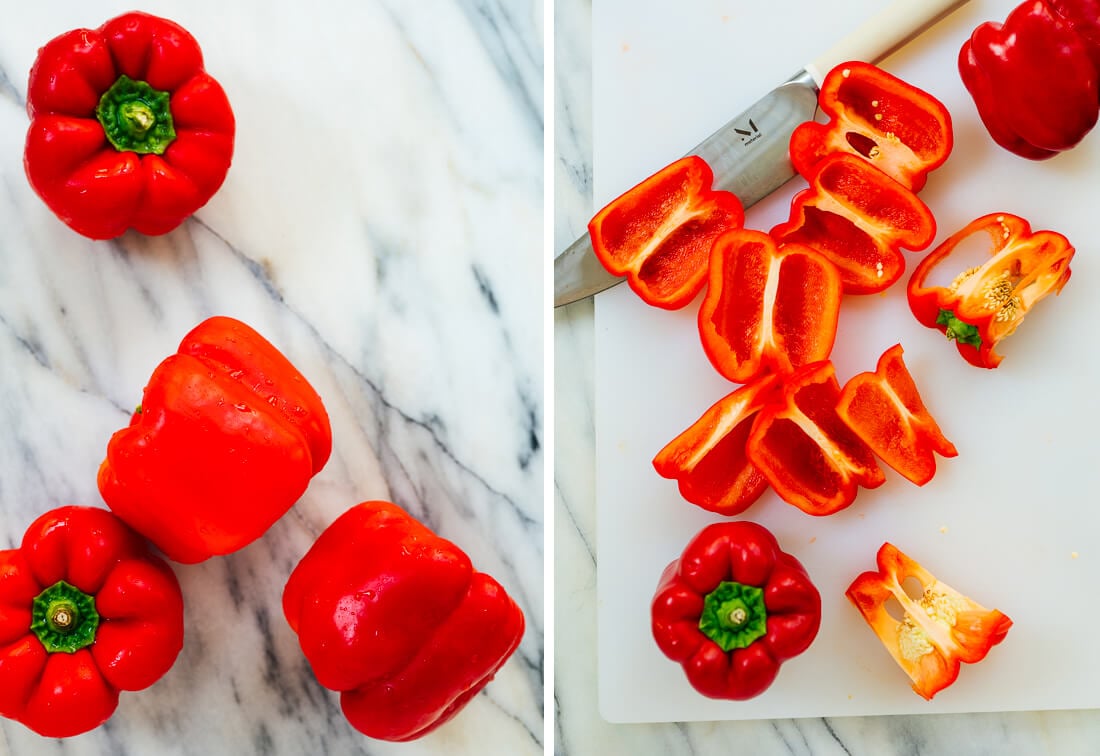 Roasting red peppers is a fairly simple process, though certainly not as simple as reaching for a jar of store-bought roasted red peppers. The downside to using jarred roasted red peppers is that they vary significantly in flavor—grab the wrong brand and you just might ruin the whole dish (been there, done that). Divina and Whole Foods 365 are reliable winners, in my experience.

Grab a helper when it comes time to peel the peppers, and your homemade roasted red peppers will be ready before you know it. They’ll keep in the fridge for over a week, too, and liven up all your dishes in between. 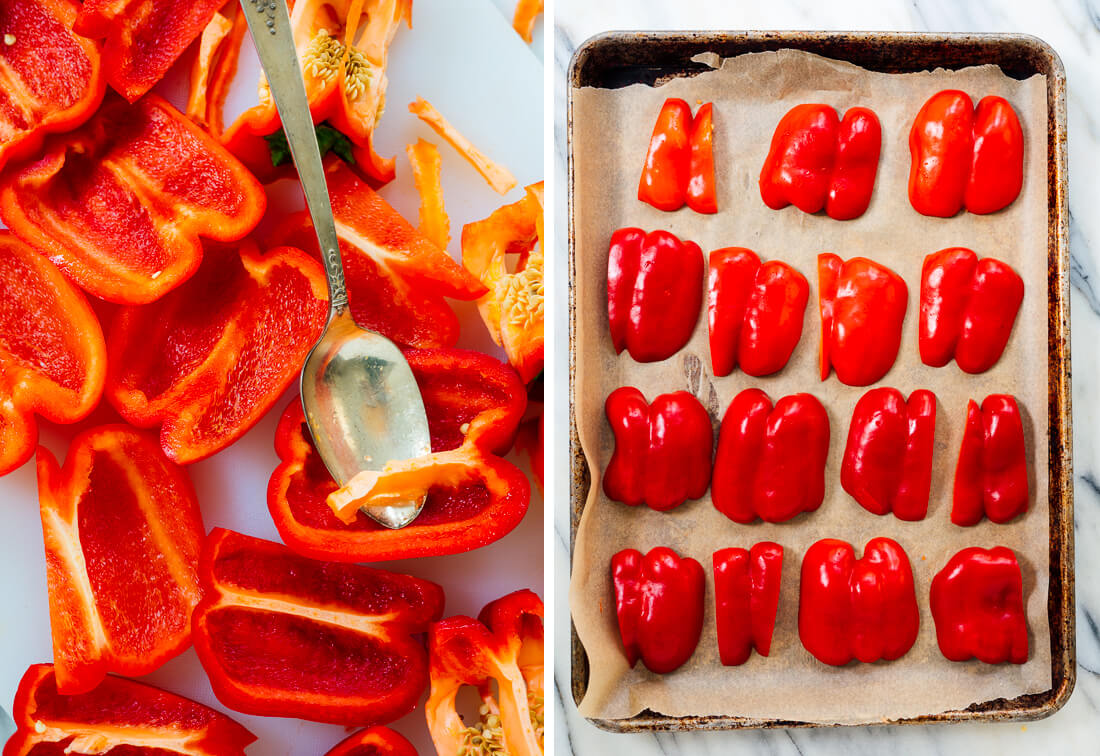 How to Roast Red Peppers

You’ll find the full recipe below. Here’s a brief rundown that explains why this technique yields the best roasted red peppers:

1) Slice the peppers into flat slabs.

I tried several different slicing methods, and slicing off all four sides of each bell pepper yields the nicest results. This way, the peppers rest nearly flush on the pan, which helps them cook evenly throughout.

Roasting at 450 degrees Fahrenheit is hot enough to achieve maximal caramelization and tenderness, but doesn’t risk burning the peppers. This is a much safer temperature than using the broiler, plus it allows you to safely use parchment paper to prevent the peppers from sticking to the pan (we’ll roast the peppers without any oil!). Even if your peppers look overly browned around the edges in the end, trust me, they will taste amazing.

Some recipes suggest charring whole peppers over a gas flame, but I recommend using the oven instead for more evenly cooked and fully tender results.

3) Let the peppers steam as they cool.

Once the peppers are blistered, wrinkly and tender, remove the pan from the oven. Using tongs or a spatula, transfer them to a bowl to cool. Cover the bowl with a plate or lid of some fashion to help trap the steam, which will make the peppers easier to peel.

4) Peel and use immediately, or store for later.

Once the peppers are cool enough to comfortably handle, peel off the tough, charred skins. Now your peppers are ready to use! They will keep in the refrigerator, covered, for a week or more. 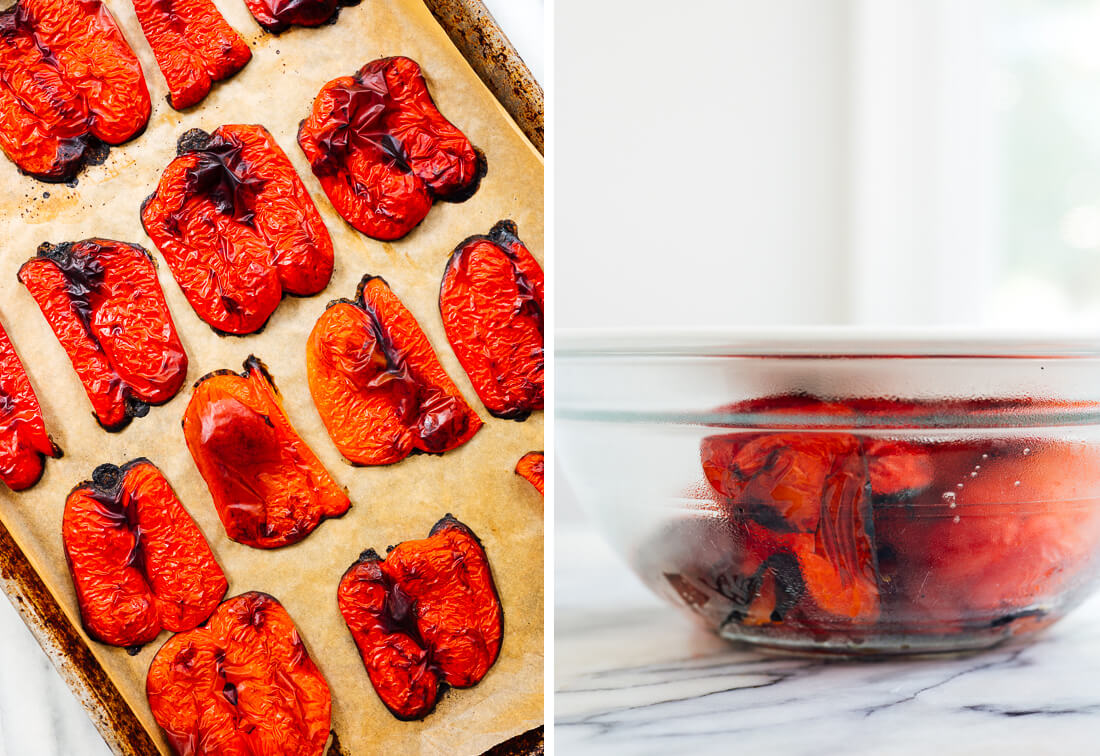 Any time you would use regular red bell pepper, you can ramp up the flavor a notch with roasted red peppers! Since roasted red peppers are softer in texture and more intensely flavored, they are perfect for blending into creamy sauces. They’re also lovely in salads, on sandwiches and pizzas when you want red pepper flavor without the crunch.

Here are a few recipes featuring roasted red peppers on Cookie and Kate: 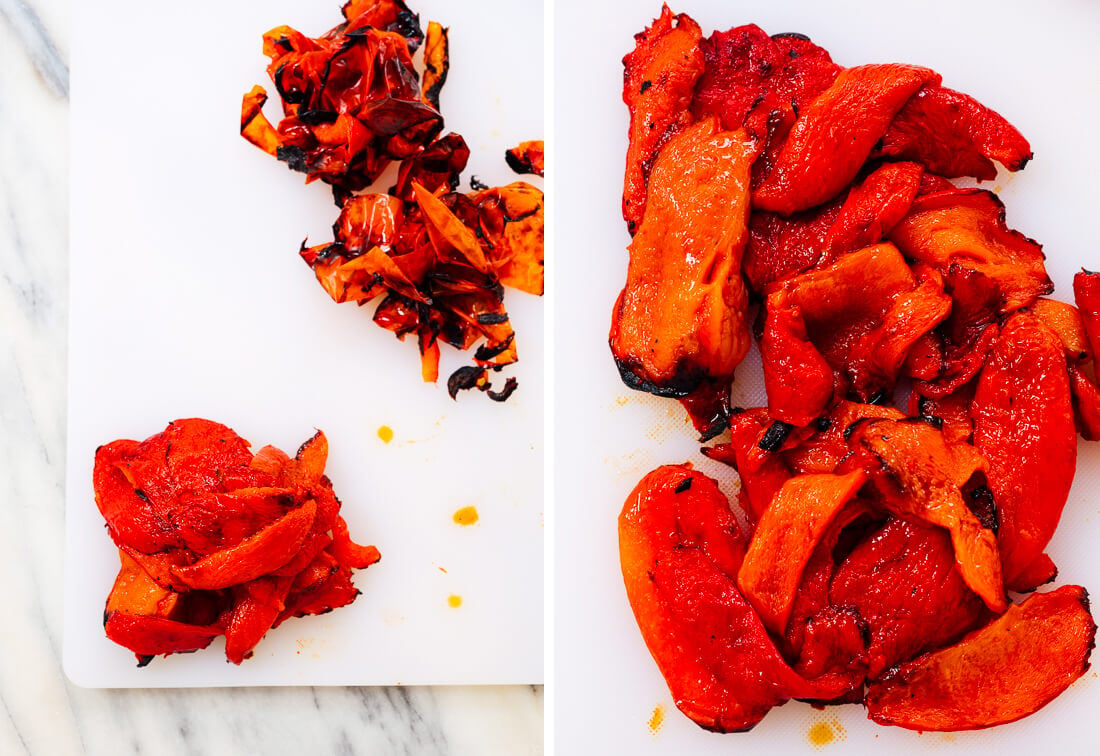 Please let me know how your peppers turn out in the comments! I love hearing how you get creative with these basic components. If you have a surplus of bell peppers, check out more bell pepper recipes here. 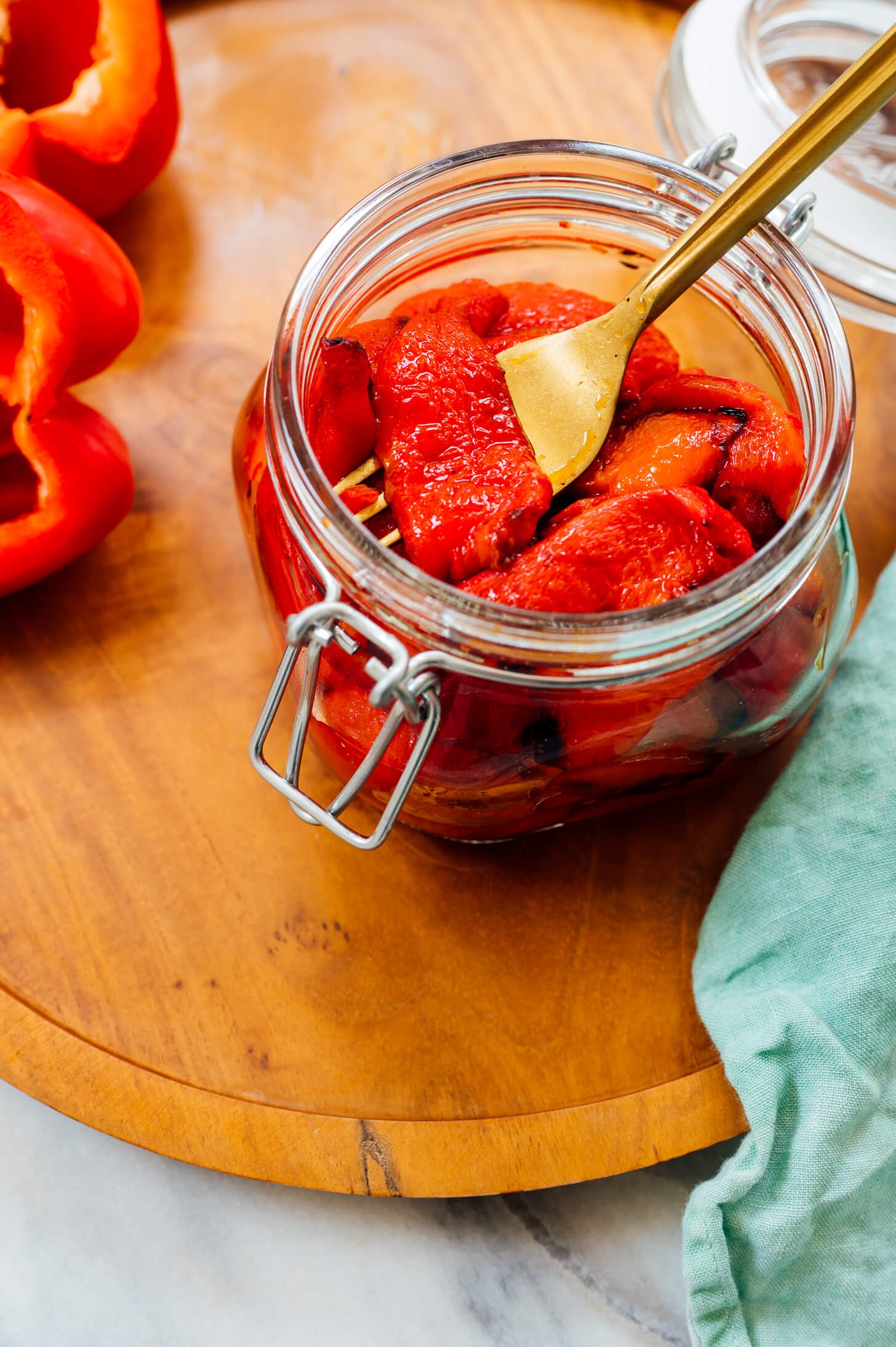 Change it up: You can also use orange or yellow bell peppers for the same effect.