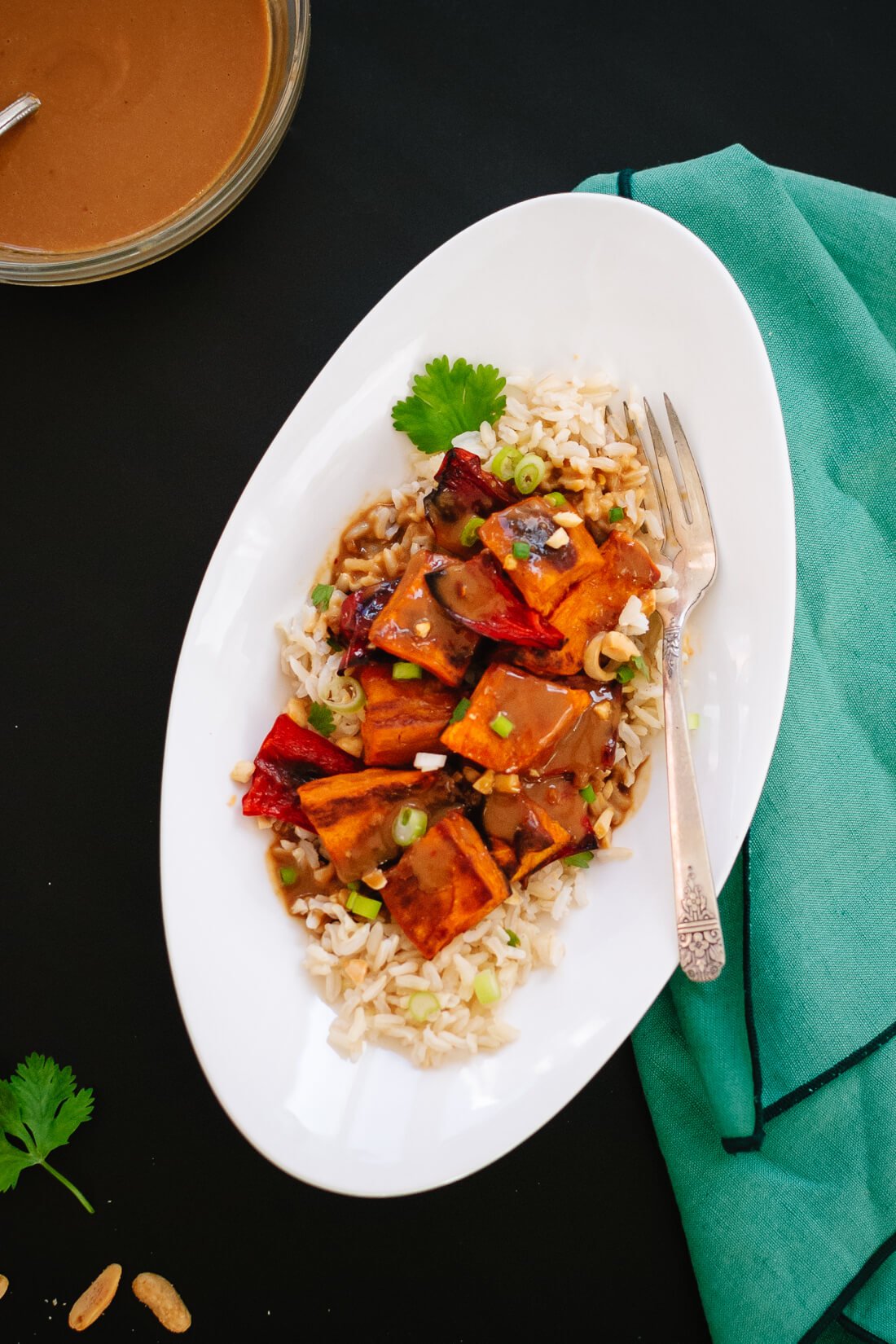 Please tell me that I am not the only girl who leaves her keys in the door. Or loses her car in parking lots. Or drops her wallet on the sidewalk. Distracted is my middle name, but committing all three of those mistakes over the past few weeks is a personal record.

I suppose I have to tell you the stories now, don’t I? I’ll start with the best one. A couple of weeks ago, I took Cookie outside before dragging myself to bed. I was exhausted—apparently so exhausted that I left my keys in my door when I shut it behind me. Dumb, right? The next morning, I woke up and searched around for my keys. I couldn’t find them in any of the normal spots. It finally occurred to me to check the door. Aha! Keys. Relief.

Then I walked down the front steps, looked over to my left, and saw my car. My car was parked in front of the fire hydrant with a white ticket flapping underneath the window wiper. That’s not where I parked my car, you guys. I walked over to my car with trepidation and peered through the windows.

Everything inside my car seemed to be in order. I got in and noticed that the seat had been scooted back a few inches. All I know about the thief (borrower?) is that he’s a few inches taller than me, drives a manual transmission and has an iPhone, apparently, since he took my cord with him. That leaves a lot of suspects. 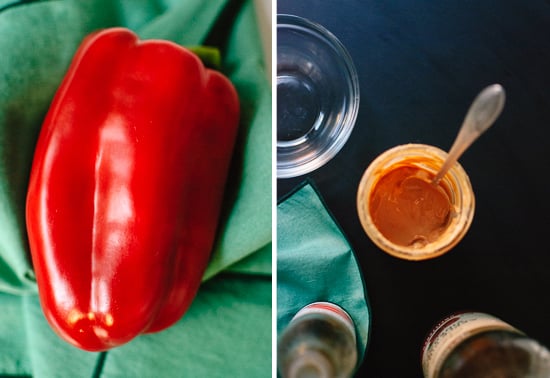 I’m still wondering what that stranger did in my car. Maybe he just wanted to cruise around the neighborhood. Maybe he ran out of beer and decided to drive over to the gas station. Maybe he intended to steal it, but quickly realized that stealing my beat-up car was a waste of time and brought it back. Maybe he dropped off some drugs. Let’s hope not. I just wish he’d dropped off the stuff in my trunk at Goodwill while he was at it.

The other stories aren’t so exciting. I was thirty minutes late to Bev‘s baby shower (she’s having twins!) because I lost my car on The Plaza. Then my wallet fell out of my grandmother’s little black purse in between Sur la Table and the corner. Thankfully, a good samaritan found the wallet and brought it to customer service, which is what I would have done for him. All said and done, I’ve really lucked out in all of these situations. I have a sixty dollar ticket to pay but that’s not the worst that could have happened.

Sometimes I wish I had someone around to catch my silly mistakes in real time. I make a lot of them. I do have you all, though. You let me know when I list garlic twice in a recipe, or when there’s a little too much pumpkin in my pancakes. You leave feedback for me in the comments section and tweet/instagram/email me photos of the recipes you’ve made at home, which makes me super happy. Even if I don’t respond right away, know that I’m listening and glad you’re here.

This recipe, for example, was inspired by a convincing comment left on my sweet potato fries recipe. Carla said, “These are wonderful and are even more unbelievable with THAI SPICY PEANUT SAUCE. Sorry to yell, but these two things were born for each other. Ketchup, honey, mayo based sauces do not do them justice.”

She sounded like she was onto something, so I grabbed a bottle of San-J Thai peanut sauce at the store and roasted up some sweet potato fries. She was indeed onto something. I did my best to recreate San-J’s version based on the ingredient list. I switched from fries to roasted sweet potatoes and made it a full meal by adding jasmine rice, red bell pepper, cilantro and chives. Thanks, Carla! 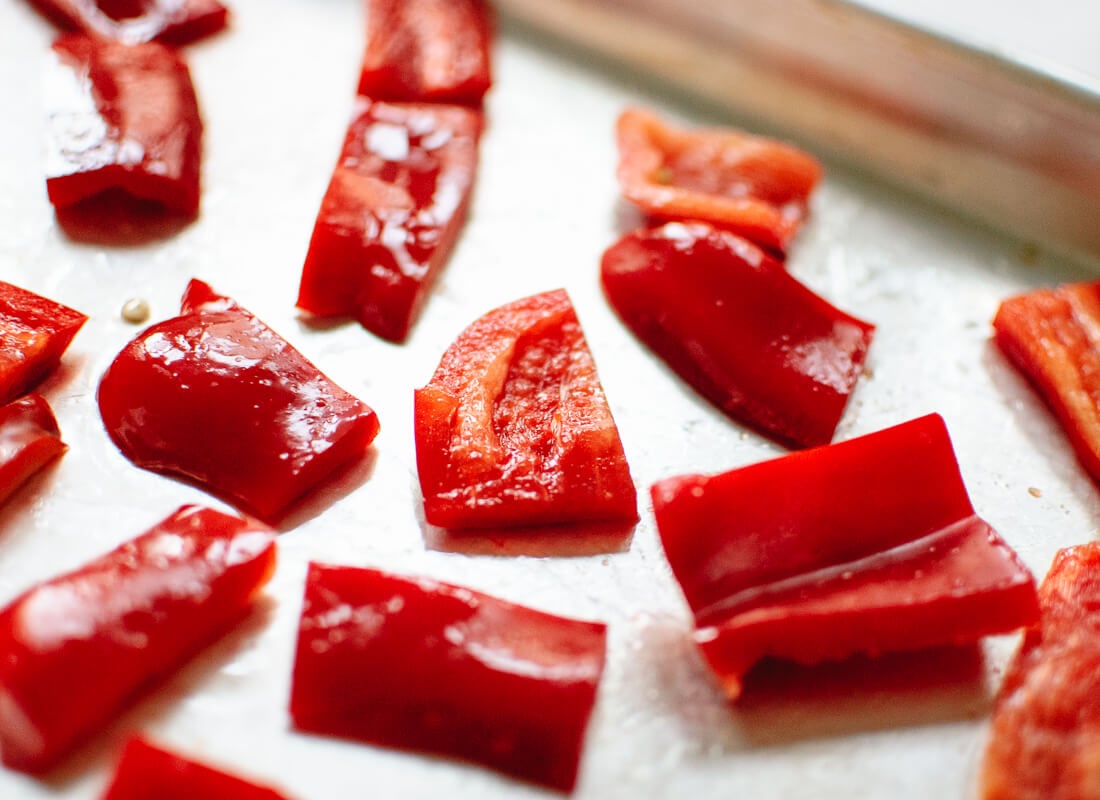 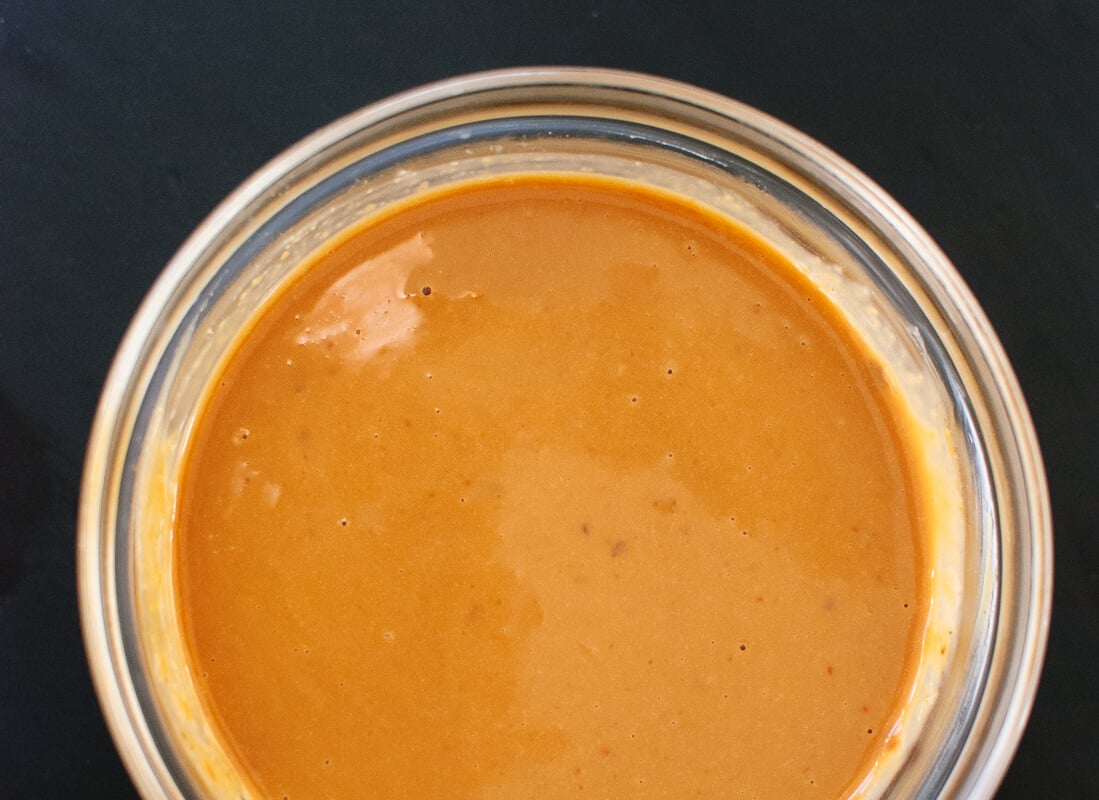 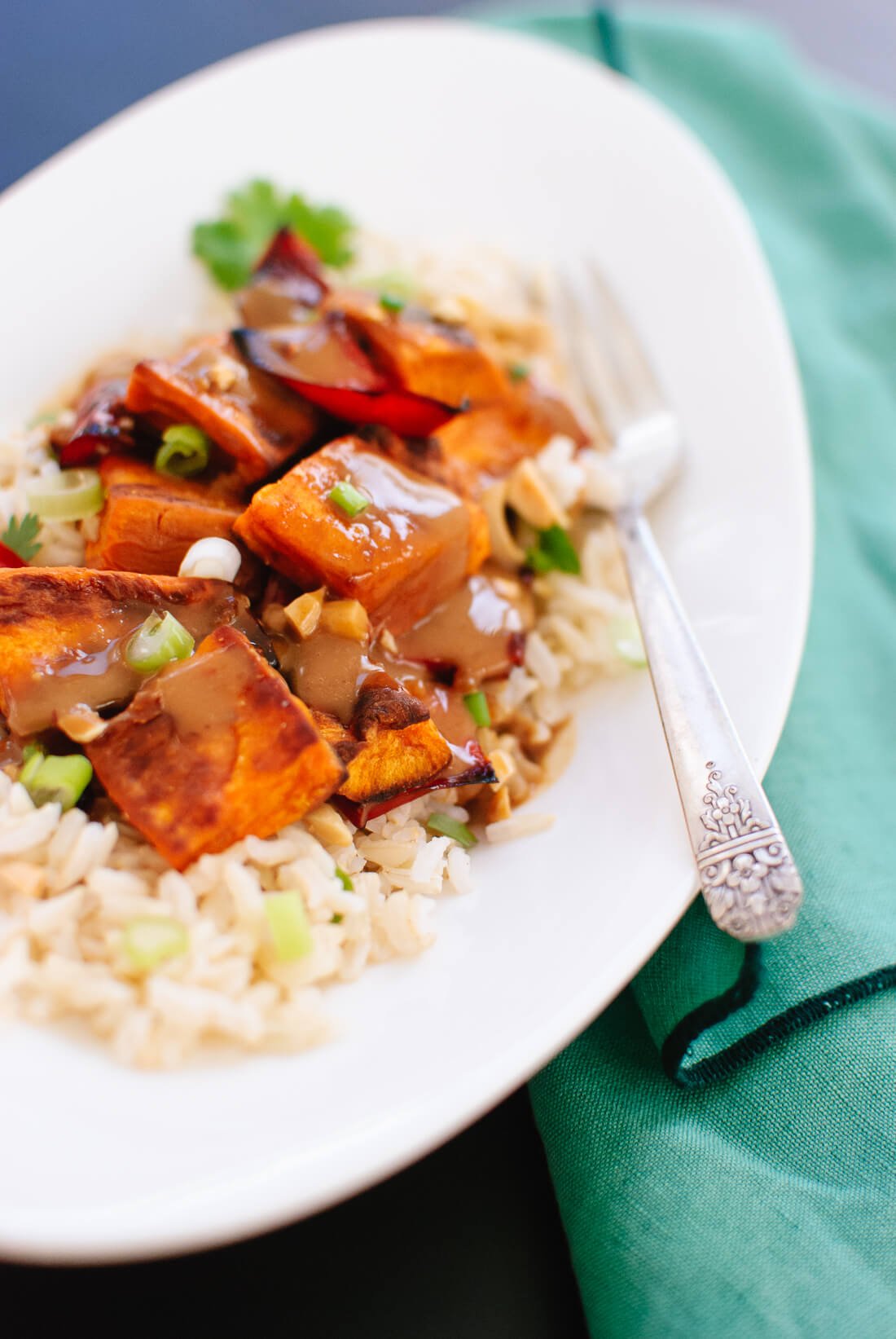 Bold and spicy Thai peanut sauce drizzled over roasted sweet potatoes and bell peppers on a bed of rice. The sauce would also be great on stir-fries and salads, or as a dip for raw vegetables. This is a healthy vegetarian, vegan and gluten-free recipe.

Storage suggestions: Leftover sauce should keep well, refrigerated and covered, for a couple of weeks. Wake up the flavors with a little bit of apple cider vinegar or tamari if necessary.

Make it gluten free: Tamari is a Japanese soy sauce that has a great flavor and is gluten free, unlike most other soy sauces. I like the San-J brand.
Make it vegan: Use maple syrup instead of honey for vegan sauce.
Other recipes you might like: my summer rolls with spicy peanut sauce, peanut soba noodle bowl and Thai green curry. Jeanine is also on a peanut sauce kick with peanut noodles and salad wraps.