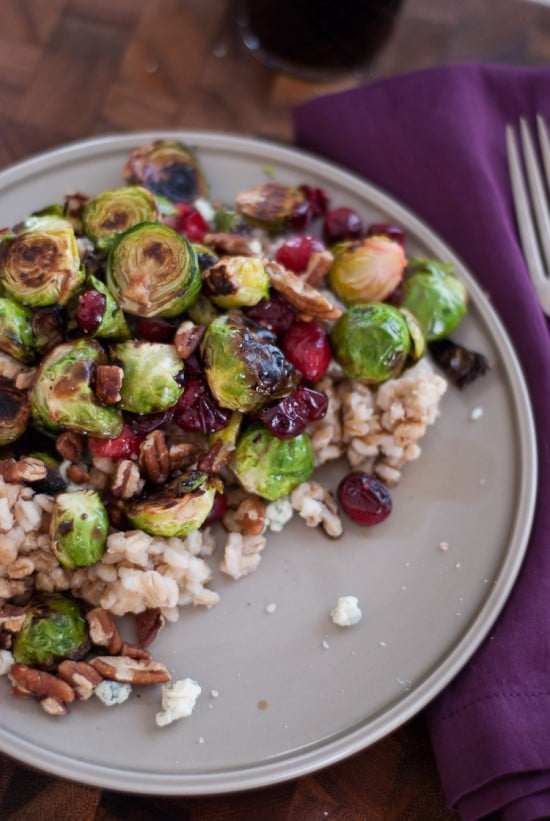 My favorite term of endearment in French has always been mon petit chou chou, which literally translated means “my little cabbage cabbage”. The French use it to mean something like “my sweetheart,” and it may or may not actually refer to a pastry instead of cabbage. Regardless, the literal translation made me giggle when I learned it in high school and it still makes me giggle today. Please, call someone you love a “cabbage cabbage” today and wait for their reaction. If you want to say it in French, chou sounds just like “shoe”. I dare you.

Anyway, my favorite French term of endearment has come to mind often this winter as I’ve sliced up Brussels sprouts to roast for dinner. Having never eaten Brussels sprouts as a kid, I was intimidated by those foreign baby cabbages. This winter I vowed to get over my apprehension. I learned to like them on my first attempt: steamed on the stove and oven roasted under a layer of Fontina cheese. Like turned to love when I learned to roast them, halved, in a cast iron pan, and I officially tombé amoureux (fell in love) when I found a quick sauté and broil method that bakes my little “cabbage cabbages” in under ten minutes. 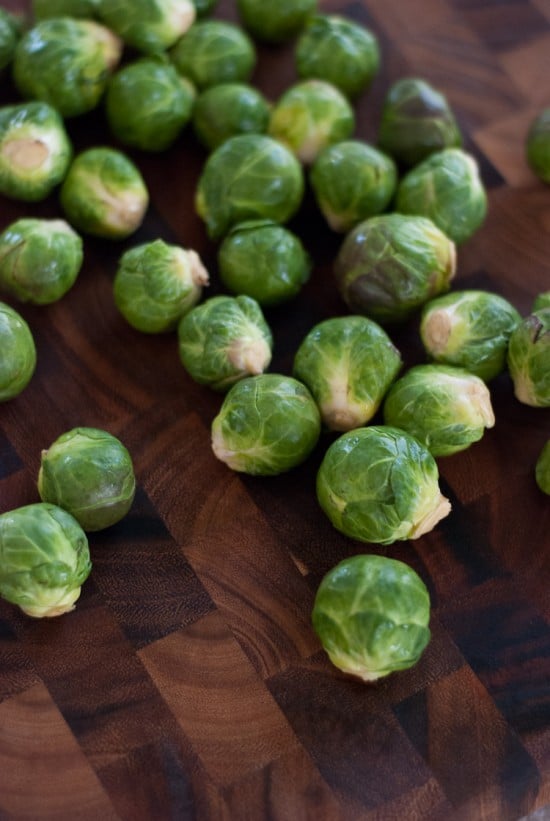 Since falling in love with Brussels sprouts, I have singlehandedly put away at least 10 pounds of roasted sprouts. I love their salty, crispy exterior and softer, steamed interior. Technically speaking, Brussels sprouts are not baby cabbages, but a special kind of miniature cabbage. The flavor is a bit reminiscent of broccoli, which makes sense because they are both Brassicas. Brassicas are notoriously high in anti-cancerous, DNA protective properties.

I crave Brussels every few days, and I’ve developed an odd habit of eating a huge bowlful of roasted Brussels after my weekly yoga class. Desolée, mes petits chou choux, I think as I slice off their tails and cut them in half. By the time I bite into crisp, roasted sprouts, I’m not really sorry at all. 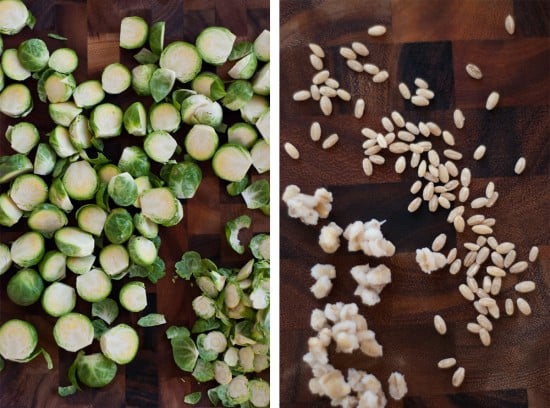 In addition to my newfound love for Brussels sprouts, I’ve been becoming more adventurous and knowledgable about various types of whole grains. Every time I visit the new health food store in town, I make a point to buy a new variety. So far I’ve tried wheat berries, farro, Kamut, steel cut oats, and most recently, barley. I like to cook up a big batch of whole grains and try to come up with ways to use the leftovers over the week. I think it’s a good way to become acquainted with a grain, and it’s a very cheap way to eat.

Though I haven’t made any direct taste comparisons, I think that wheat berries, farro and Kamut are all pretty similar in taste and texture, and could easily be substituted for one another. I expected barley to be like the others, with a chewy exterior and soft interior, but I was surprised to find that it is fluffy and soft. Barley seems like a cross between brown rice and oatmeal. Thus it’s a little creamy and almost risotto-like, which makes it the perfect grain to soak up dressing in this recipe.

Another thing I’ve learned about cooking whole grains is that their cooking time varies, sometimes even from the time listed on the bag. I just mixed two cups of uncooked, hulled barley with six cups of water (a 1:3 ratio), let it come to a boil, and then simmered it, covered, for a little less than an hour. One cup of uncooked barley will yield plenty for this recipe and two cups of uncooked barley will leave you with tons of leftovers. I encourage you to get creative and come up with new ways to enjoy barley in your cooking. 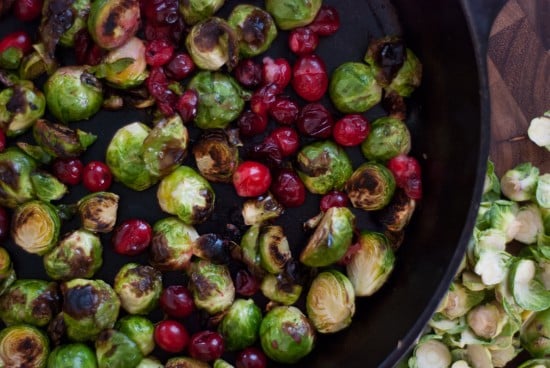 This recipe is one that I’ve been working on for a while now. Brussels sprouts tossed in a light maple syrup and balsamic dressing pair marvelously with sweet, freshly cooked cranberries, and a bed of creamy leftover barley is the perfect final resting place for mes petits chou choux. Tangy Gorgonzola cheese melts into the barley and toasted pecans add a nice crunch.

This dish is easily deconstructed, however. Feel free to roast the Brussels sprouts with this method, and toss them with salt and a squeeze of lemon juice for a snack. Brussels, cranberries and pecans without barley make a great side dish. If you can’t find fresh cranberries, you can substitute dried cranberries (which is a shame, in my opinion, but do as you wish). Just toss the dried cranberries in with the sprouts after they’re done roasting. Vegan? Omit the cheese. 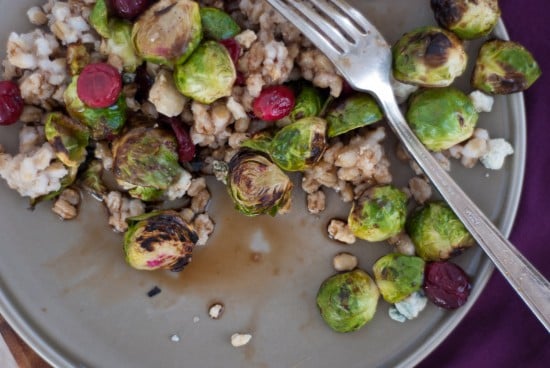 Recipe adapted from Love and Lemons’ maple and balsamic roasted Brussels sprouts recipe and one of Mark Bittman’s recipes in The Food Matters Cookbook. The quick-roasted sprouts method is adapted from The Kitchn.
Serves two.
Make it vegan: Omit the cheese.
Make it nut free: Omit the pecans, or if you feel like experimenting, try adding pumpkin seeds instead!
Recommended equipment: I highly recommend using a 12-inch cast iron skillet rather than a large oven-safe, non-stick skillet because typical non-stick skillets release toxins at high temperatures.
Preparation tips: Brussels sprouts are best cooked flat side down because the heat gets trapped inside the sprout and, in effect, steams it. It’s the best way to get crispy flat sides and cooked insides.
A note on the pecans: If you’re adding pecans, I recommend toasting the pecans over medium heat in a separate pan. They will burn over high heat.

Last but certainly not least, I have an exciting announcement to make! Sarah of 20something cupcakes and I are starting a community cooking project called The Food Matters Project. Sarah brought The Food Matters Cookbook to my attention a few months ago because she loved the recipes, but mostly because it had given her a new viewpoint on food. I bought the cookbook, and after reading through the introduction, realized that Mark and I share the same cooking philosophy—that eating more plants and whole grains and less meat and processed food is better for our health and the environment. Then I poured through all 500 recipes, dog-earing many of them to try later. I adore the recipes because they’re healthy, simple and versatile, which are all essential recipe qualities in my mind. Truly, if I had to pick one cookbook to recommend above all others, it would be this one.

Sarah and I are so enamored with Mark Bittman’s recipes in The Food Matters Cookbook that we want to build a community around it and cook through the book together. If you want to learn how to cook healthy food, try new ingredients, or challenge yourself creatively, this project is for you. We can’t wait to see how you interpret his recipes!

Just like Mark Bittman, we want this project to be as unfussy and approachable as possible. Bloggers and non-bloggers alike are welcome to join, and you decide whether or not you want to cook the selected recipe each week. And just so we’re clear, we have no affiliation with Mark Bittman; we just feel that his cookbook is perfectly suited for a group cooking project.

Learn more about the project at our new website, thefoodmattersproject.com, and follow our facebook page for updates! You can buy the book over here. I hope you are as excited as I am about the project and I hope you’ll participate. We launch on February 6, so get ready!