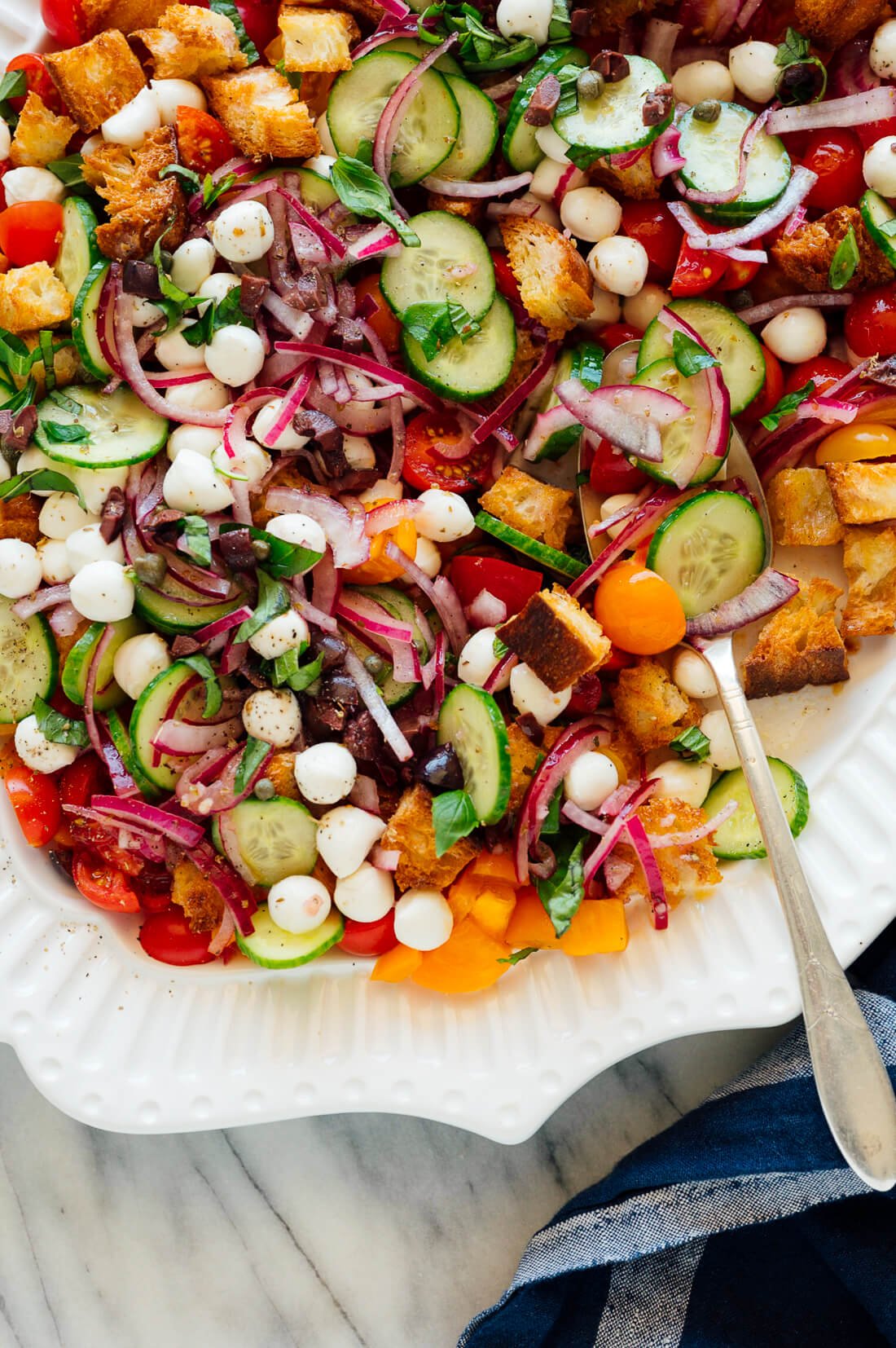 Panzanella! A fun name for a bold summertime salad. Panzanella is Italy’s delicious solution for extra tomatoes and stale bread.

This panzanella salad is my take on the classic. It features ripe tomatoes, crisp homemade croutons, fresh cucumber and basil, and mozzarella under a simple, zippy vinaigrette. It’s a study in textures and refreshing Italian flavors. 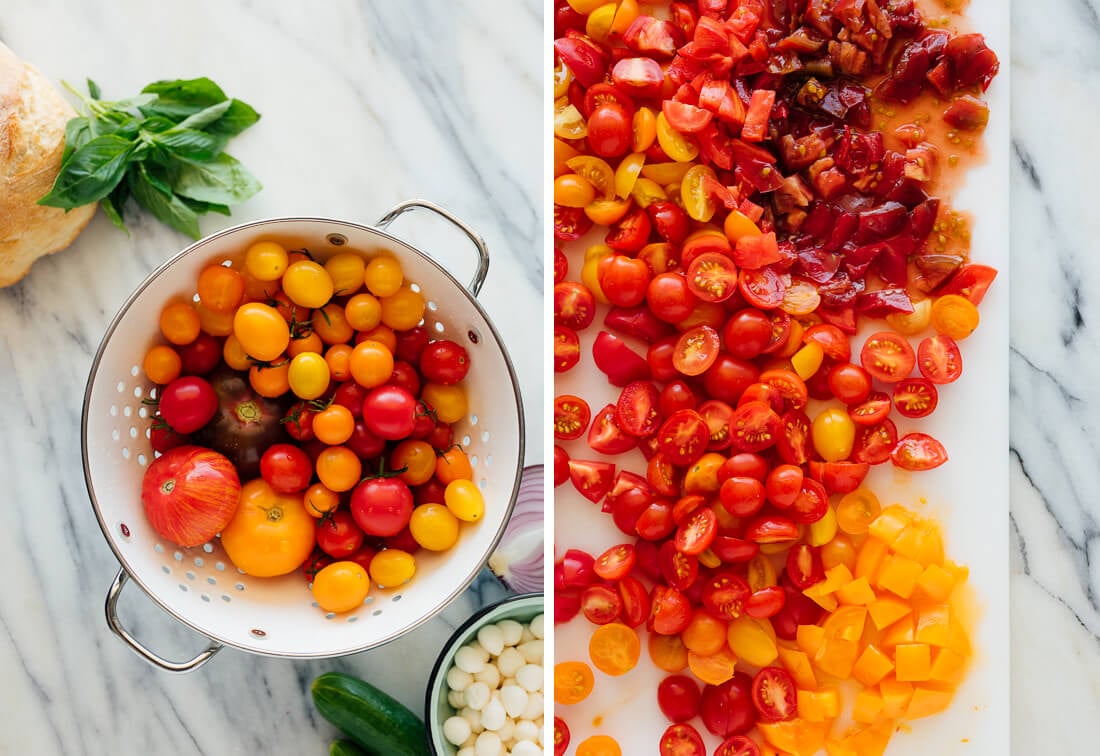 I’m in love with this panzanella salad recipe and think you will be, too. It avoids all of the potential panzanella pitfalls. Some panzanellas are mushy, bland or watery—not this one.

This panzanella salad makes use of small tomatoes, which are less watery and less likely to be mushy. It’s composed on a large platter in layers, which is key to its good looks. You decide how long to let the salad rest before serving—the croutons soften up with time, in the best way.

Great tomatoes are absolutely essential, so hurry and make this panzanella while you still can! 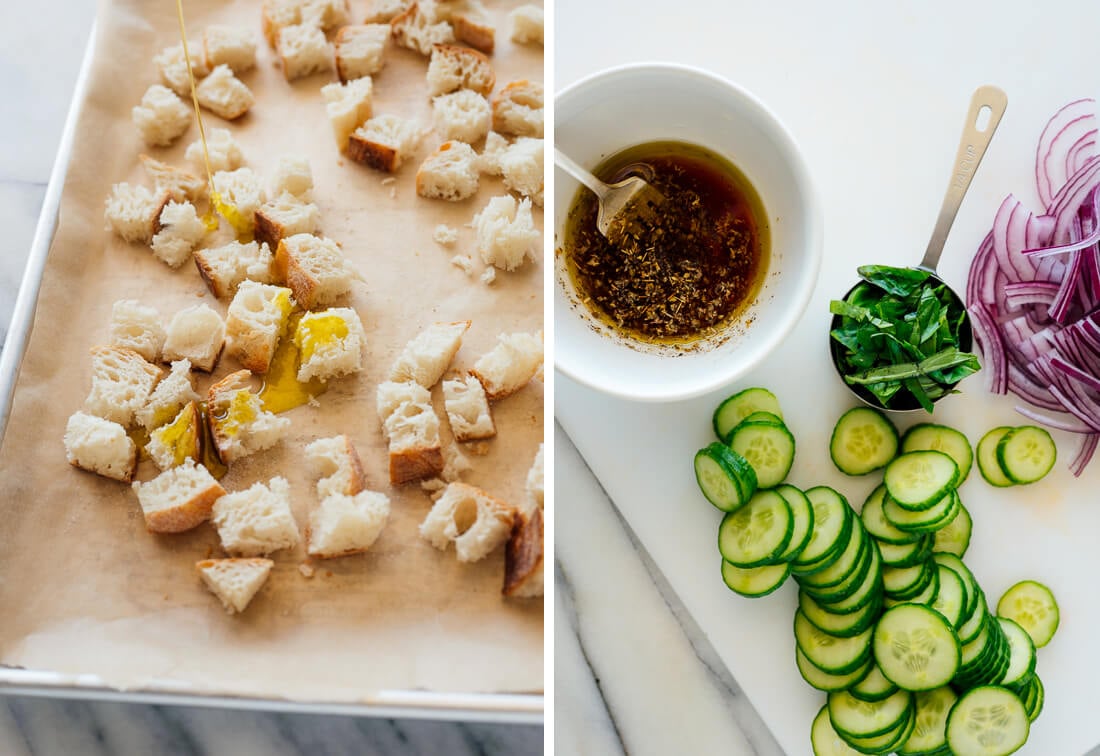 Authentic Panzanella vs. This Recipe

My recipe differs somewhat from truly authentic panzanella. Florentine panzanella makes use of stale bread by soaking it in water and wringing it out. Then, it readily soaks up the tomato juice, olive oil and vinegar.

My recipe is more like the panzanella you’ll find on American menus. Since I’m a sucker for crispy homemade croutons, I opted to turn stale bread into hearty croutons instead.

The oil on the outside helps the repel tomato juice, but as the salad rests, some croutons will inevitably start absorbing some. I love the contrast of the crisp edges with a soft, pillowy, tomato-y side.

Classic panzanella is also made with a more pared down ingredient list, although mine really isn’t very long. You may or may not find cucumber, mozzarella, olives and/or capers, dried oregano and garlic in Italian panzanella, but they’re so good! 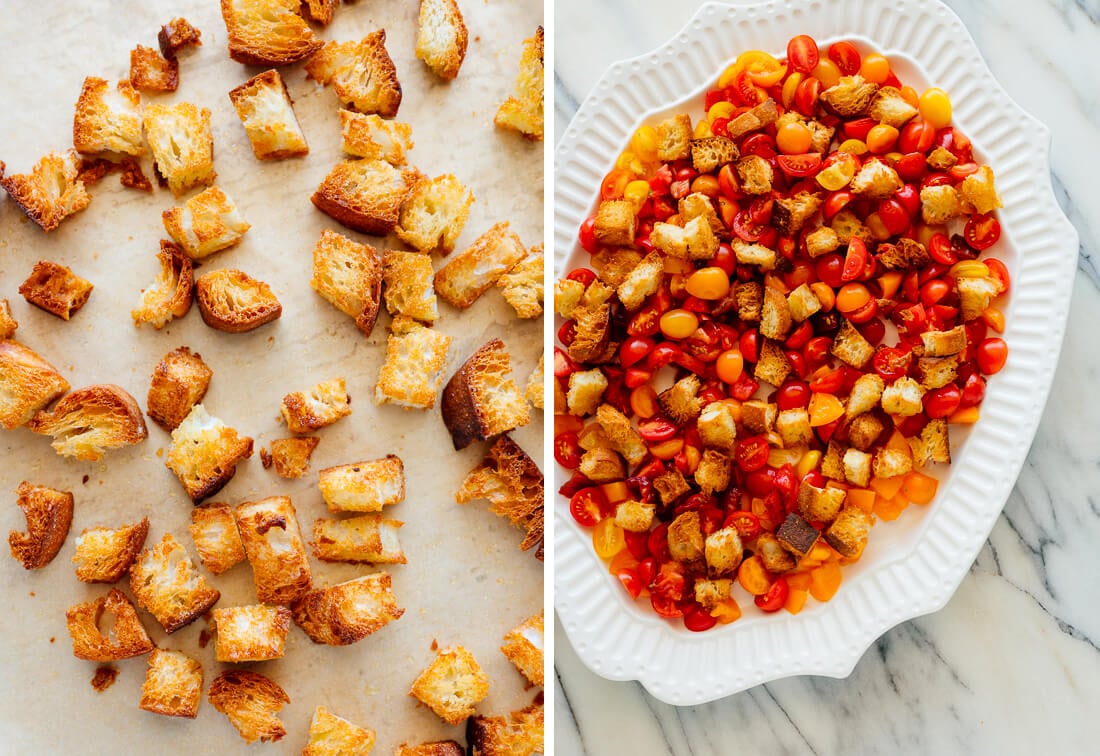 Here’s what you’ll need to make this panzanella recipe:

You’ll only need one-fourth of a loaf, so this really is the perfect use for stale leftover bread. Use ciabatta, sourdough or French bread. You can use whole grain if you’d like. I would have, if I could have found it!

You can’t make a great panzanella without great tomatoes. I highly recommend using cherry tomatoes and other smaller tomatoes to make panzanella.

Large tomatoes can be so soft and juicy that they completely break down when sprinkled with salt. We want our salad to be a little juicy, but also substantial, so smaller tomatoes are key.

Crisp cucumber is a refreshing addition. Persian (mini) cucumbers are my favorite. You can also use a standard cucumber—if it’s particularly seedy, slice it in half and scoop out the seeds first.

Mozzarella is optional, but offers a hearty, creamy component. Buy one ball of fresh mozzarella and tear it into small pieces, or opt for cute little mozzarella balls like I did.

Basil makes this salad so fresh and green! Don’t skip it.

Red onion is standard, and offers some crisp, pungent heat. I tempered the onion’s intensity by tossing it in the homemade vinaigrette and chilling it while working on the rest of the salad. The result is lightly pickled, lightly softened red onion—irresistible.

Use your favorite or both. If you don’t like either, omit them altogether! I loved the briny, salty combination of the two. We’re only using two tablespoons total, so it’s a subtle effect.

We’ll toss the bread in olive oil before baking so it gets extra crisp and golden. Then, we’ll stir together some additional olive oil with vinegar to make a vinaigrette. The vinaigrette is intentionally zippy, since we’ve already used olive oil to make the croutons and the tomato juice mellows out the flavor.

This salad isn’t complete without some standard Italian seasonings. Don’t skimp on the freshly ground black pepper and oregano—panzanella can handle it. 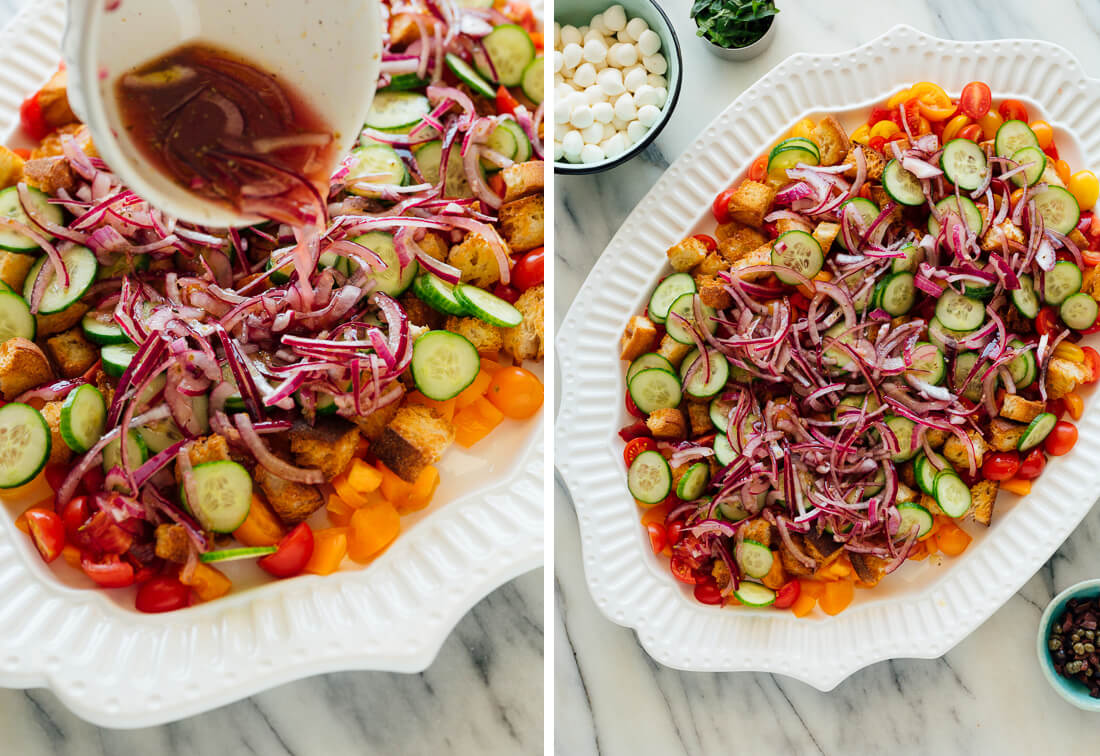 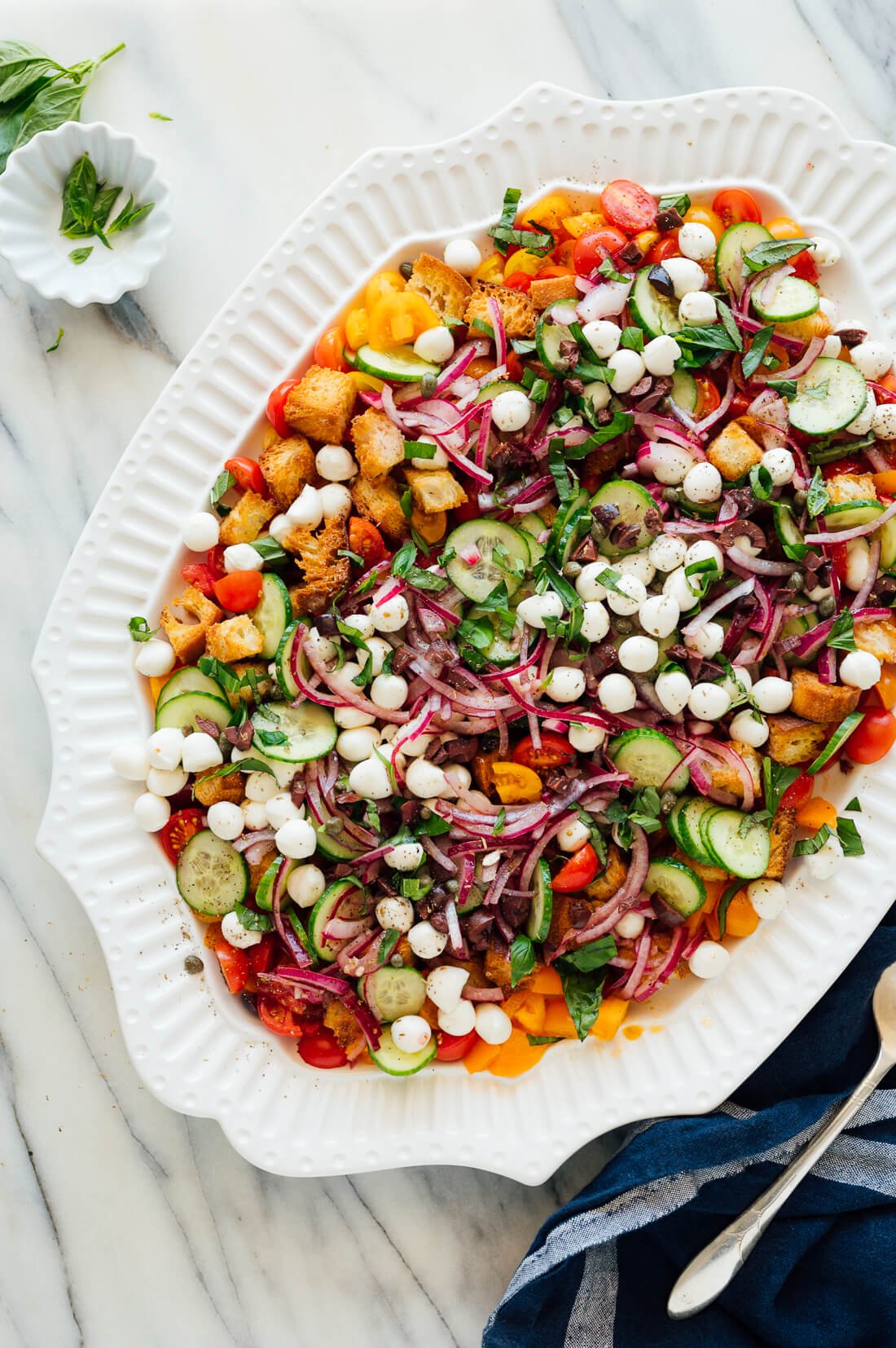 Hurry and make these recipes before summer ends:

Please let me know how your panzanella turns out in the comments! I can’t wait to hear from you. 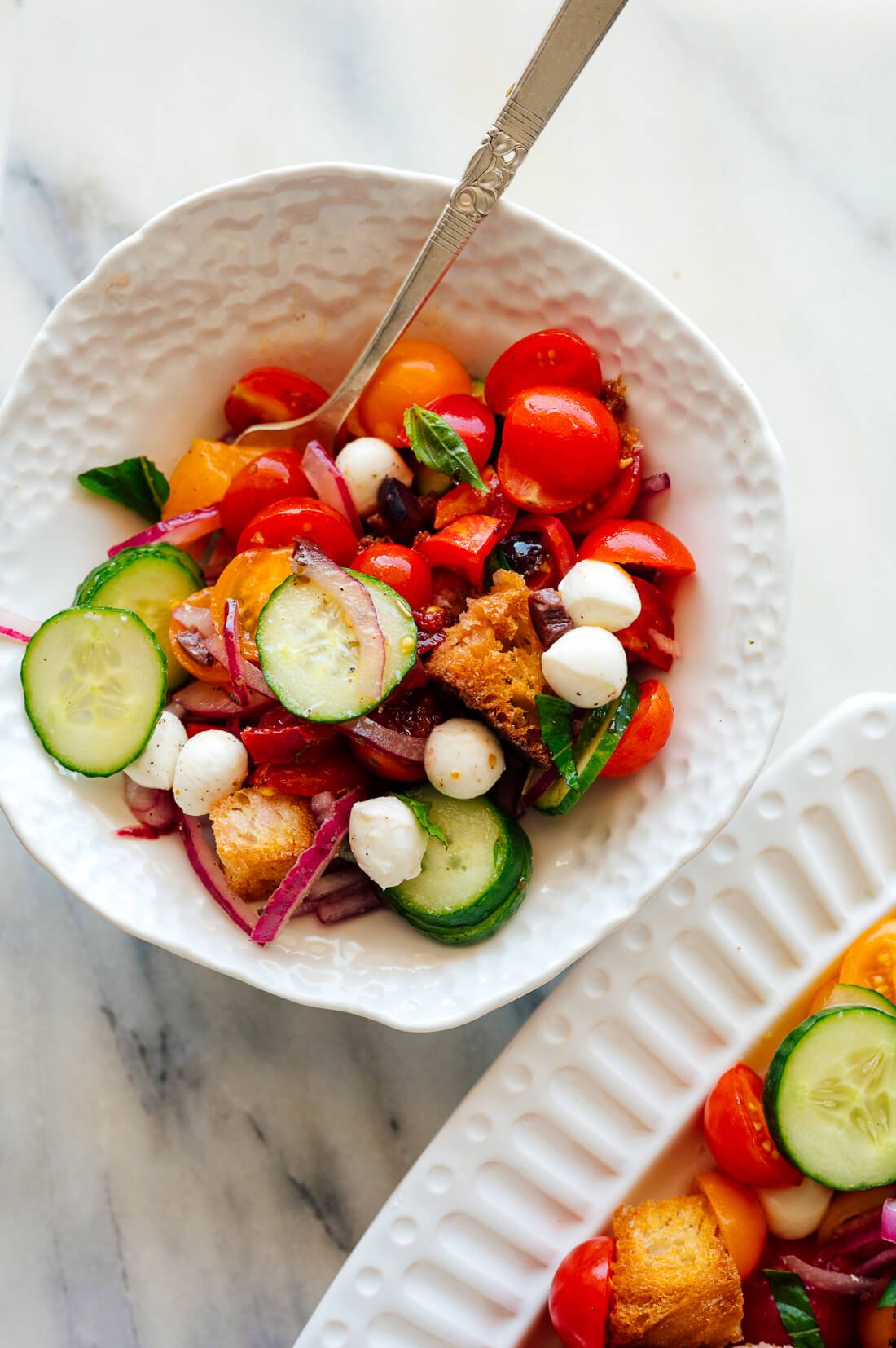 This panzanella salad recipe is the best! It features loads of ripe tomatoes and fresh summertime produce, homemade croutons, and a light vinaigrette. Layering the ingredients on a large platter is key. Recipe yields 1 large salad, enough for 8 side servings.

*Stale bread note: If your bread is super soft inside and challenging to cut, bake it on the baking sheet dry for 3 to 5 minutes. Then, cube it, toss it in olive oil and bake as instructed.

Make it dairy free/vegan: Simply omit the mozzarella or replace it with cooked chickpeas (as much as one 15-ounce can, rinsed and drained, or 1 ½ cups cooked).

Change it up: If you hate olives and capers, leave them out. Add a diced bell pepper to the mix if you’d like some additional crispness. See above for how to use chickpeas instead of mozzarella.

Storage suggestions: This salad does not keep particularly well for later because the croutons will continue to absorb dressing over time and turn to mush. If you plan on having leftovers, reserve the croutons for later.