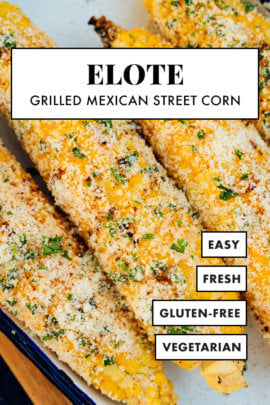 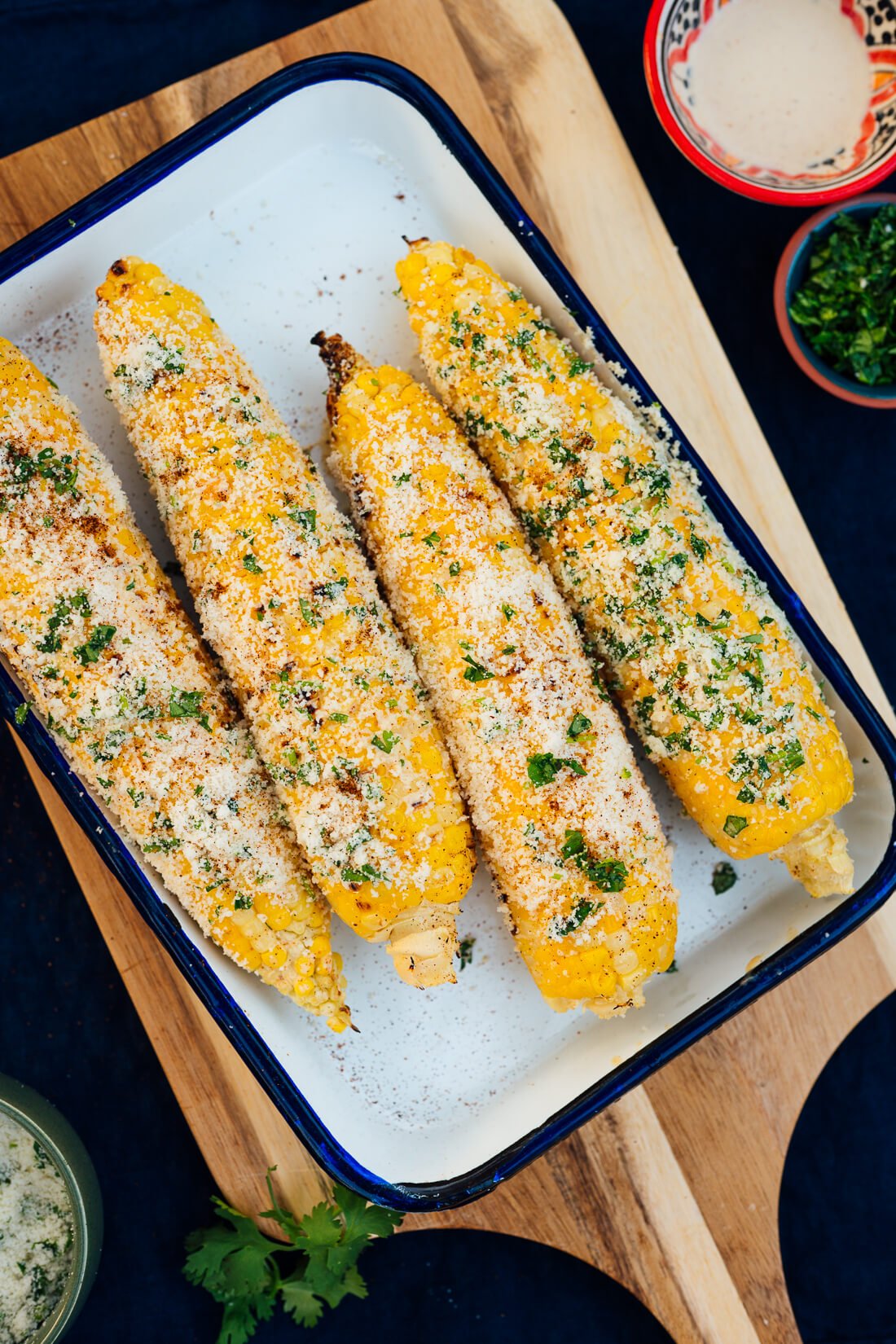 What is elote? Elote (pronounced eh-loh-tay) is Mexican street corn. If you’ve had it, I bet you love it. If you haven’t, you’re in for a treat! Elote tastes sweet and savory, tangy and spicy all at once. I love to make mine with grilled corn for some smokiness, too.

Elote is made with corn on the cob, slathered with mayonnaise, seasoned with chili powder and fresh lime juice, sprinkled all over with salty Cotija cheese and cilantro. It’s messy to eat but worth every bite. Elote is the perfect summertime side dish for any Mexican-inspired meal. 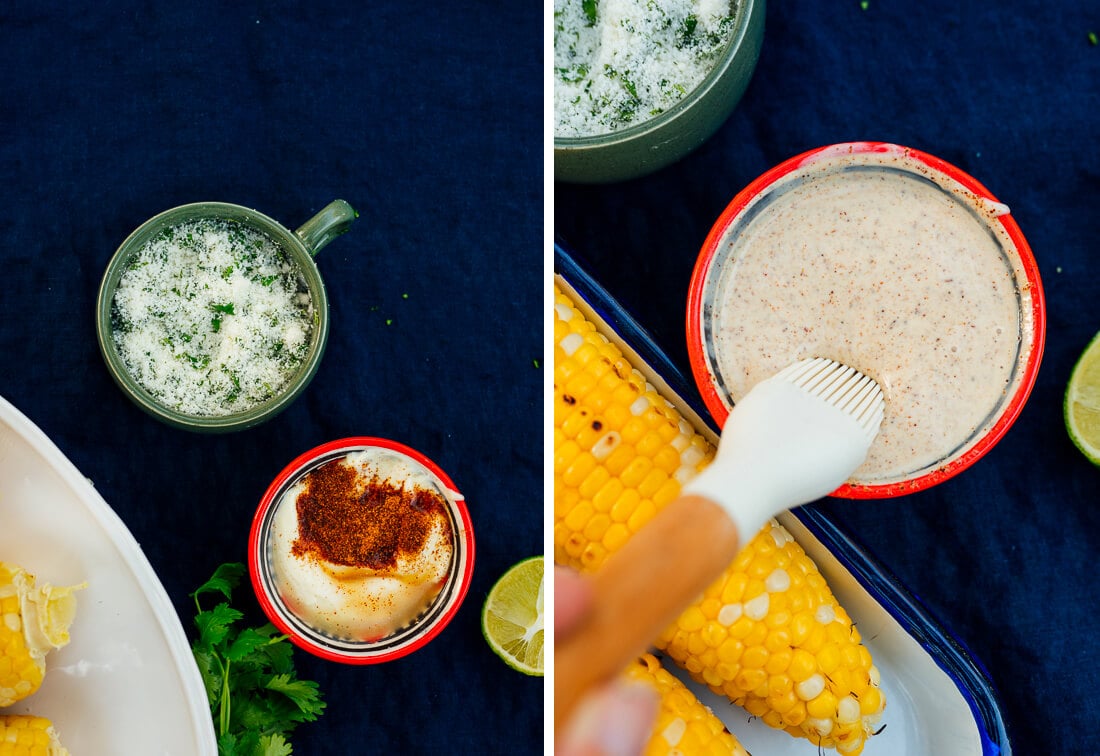 In Mexico, elote means an ear of corn, and this recipe replicates a popular serving style sold by street vendors. I can’t claim that this elote recipe is quite authentic, but it brings me back to the elotes I enjoyed in Mexico City.

I’m dreaming of traveling throughout Mexico, sampling the cuisine region by region. Someday! For now, we’re making the most of dinner at home. 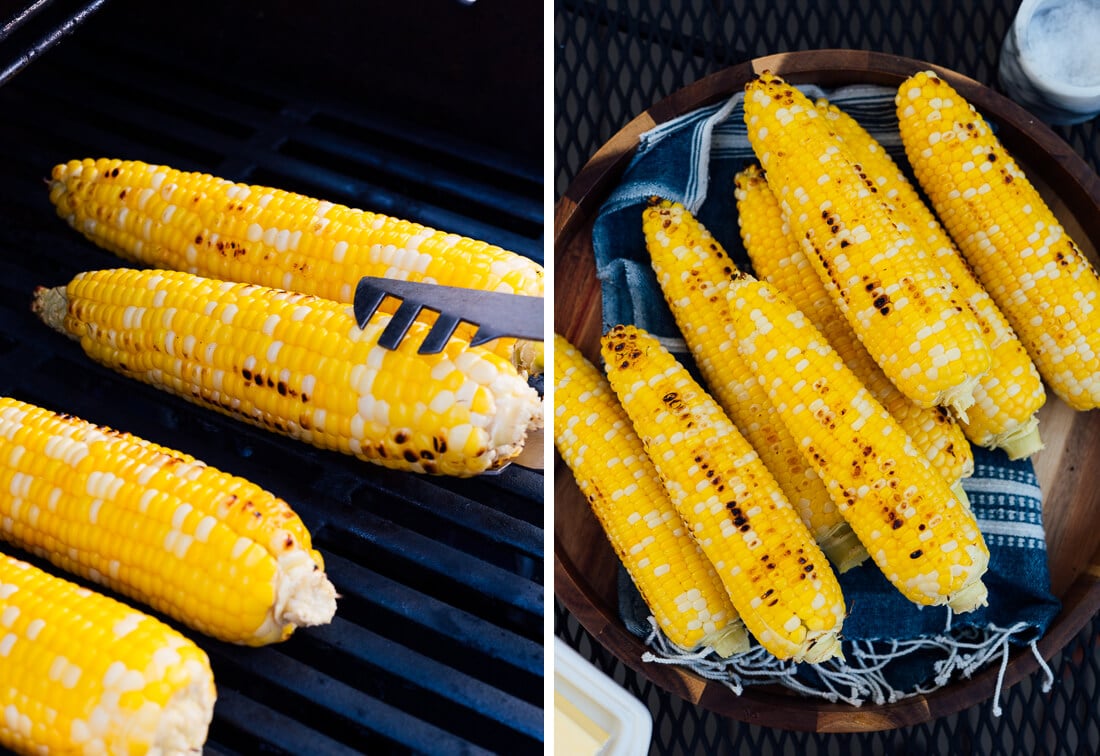 How to Make Elote

Elote is quite easy to make. Once your corn is cooked, you’re only five to ten minutes away from elotes! Here’s how to do it:

You could steam or boil your corn cobs instead, but like I’ve said, I love the flavor of grilled corn.

2) Prepare your sauce and sprinklings.

While the corn is cooking, you’ll mix together mayonnaise, lime juice, chili powder, optional cayenne (if you like heat) and salt. In another bowl, mix together grated Cotija cheese and cilantro.

3) Brush the corn with the mayo blend.

This is where things start getting messy. If you don’t have a pastry brush, you could probably get by with a butter knife.

4) Sprinkle the Cotija and cilantro mixture all over.

Place a plate under the corn to any cheese that doesn’t stick. You might need it.

5) Finish it off with a sprinkle of chili powder.

A final dusting of chili powder offers some much-needed color and a final boost of flavor. Enjoy!

Watch How to Make Elote

I absolutely love this recipe as written below, but please adjust it to suit your pantry and preferences. 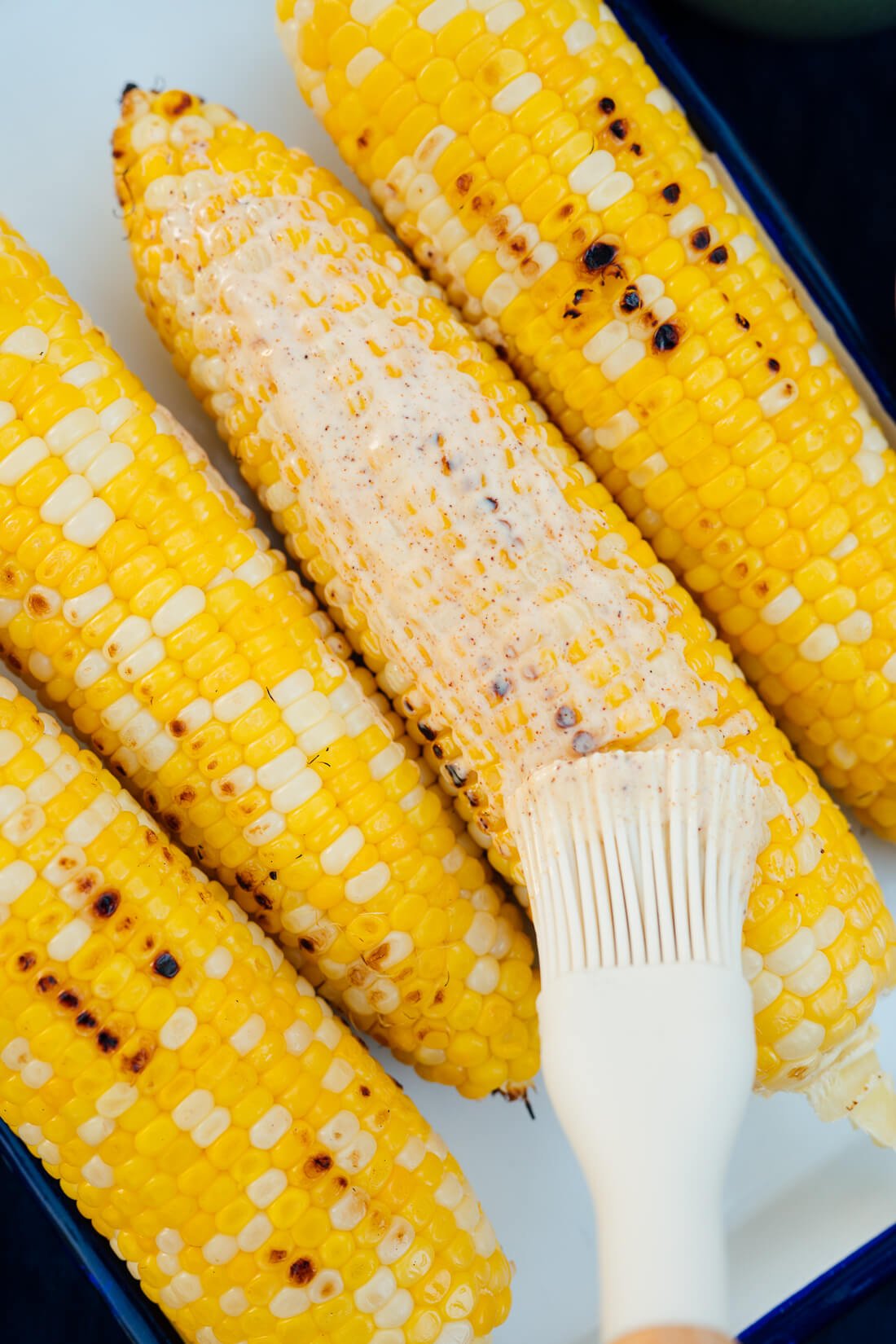 How to Serve Elote

Traditionally, elote is served on a wooden skewer. I’ve also enjoyed it without the skewer, as you see here. It’s inevitably a little messy either way.

For smaller serving sizes, slice the grilled corn cobs in half before turning them into elotes.

Or, use a knife to strip the corn kernels from the cob. Serve your corn in cups with the mayonnaise mixture and Cotijah blend on top. This variation is called esquites or elote en vaso (“corn cup”). Check out my esquites recipe here.

What to Serve with Elote

In Mexico, the street vendors that sell elote are known as eloteros, and the genre of foods they serve are called antojitos (“little cravings” in Spanish). These “little cravings” are treated as appetizers between meals, or as late-night snacks.

So, serve elote as a snack or appetizer, or as a side dish to any Mexican-inspired meal. It’s a great option for barbecues, too. Here are a few entrées that would go well with elote, or you can view all of my Mexican recipes here.

Please let me know how your elote turns out in the comments. I really love hearing from you. 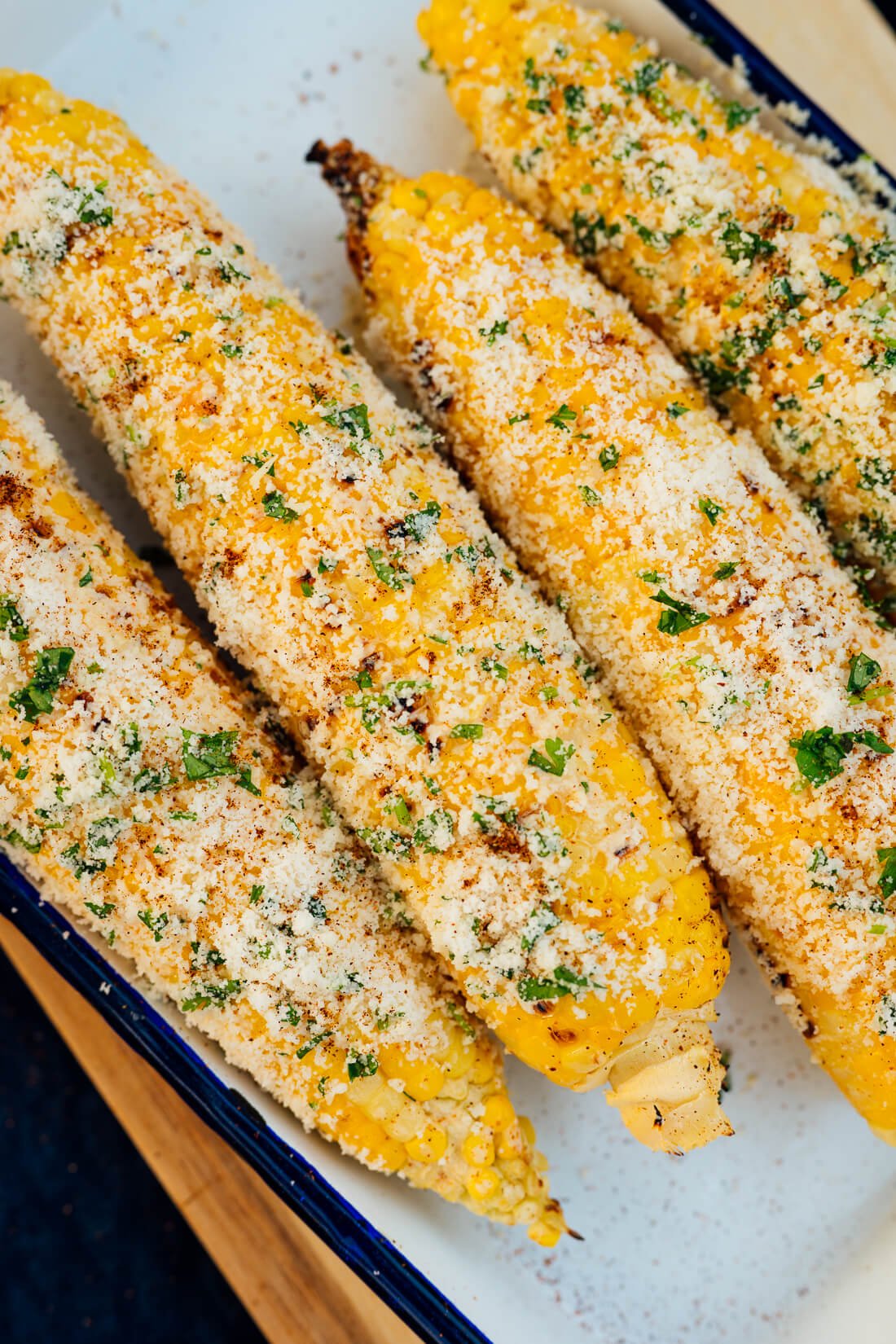 Learn how to make elote with this simple recipe! We’ll top grilled corn on the cob with a tangy blend of mayonnaise, lime, chili powder, and finish it with a heavy sprinkle of Cotjia cheese and cilantro. Serve elote as a snack or appetizer, or as a side dish to any Mexican meal. Recipe yields 4 elotes; multiply as needed.

Change it up: Grilled corn offers extra flavor, but boiled or steamed corn on the cob works, too. Try using a fun variety of chili powder, like chipotle, ancho, guajillo or Tajín (a Mexican blend of chili powder and lime), as an alternative to basic chili powder. Some recipes use sour cream instead of mayonnaise (or a combination of the two), but I felt that the flavor was more muted with those variations. Still, it’s an option—even Greek yogurt would work for a lightened-up option. If you don’t like cilantro, simply omit it.

Esquite variation: Also known as elote en vaso (“corn cup”), or a less messy way to enjoy elote. Once the corn is cooked, carefully use a chef’s knife to slice off the kernels. Divide the kernels between 4 cups, then top each one with ¼th of the chili-mayo sauce, followed by ¼th of the Cotija-cilantro blend. Finish them with a light sprinkle of additional chili powder, and serve with spoons. Or follow my stovetop esquites recipe.

Make it dairy free: Try a sprinkle of vegan Parmesan in place of the Cotija (use less than called for in the recipe, since the Parm is more salty). Or, just omit the Cotija.

Make it vegan: Try my vegan sour cream in place of the mayo, and a sprinkle of vegan Parmesan in place of the Cotija (use less than called for in the recipe, since the Parm is more salty). Or, you could use a good vegan mayonnaise and omit the cheese.

*Where to find Cotija cheese: Look for Cotija in well-stocked grocery stores or Mexican specialty shops. I buy it at Whole Foods, near the goat cheese. If you can’t find it, try finely crumbled feta cheese or finely grated Parmesan instead.