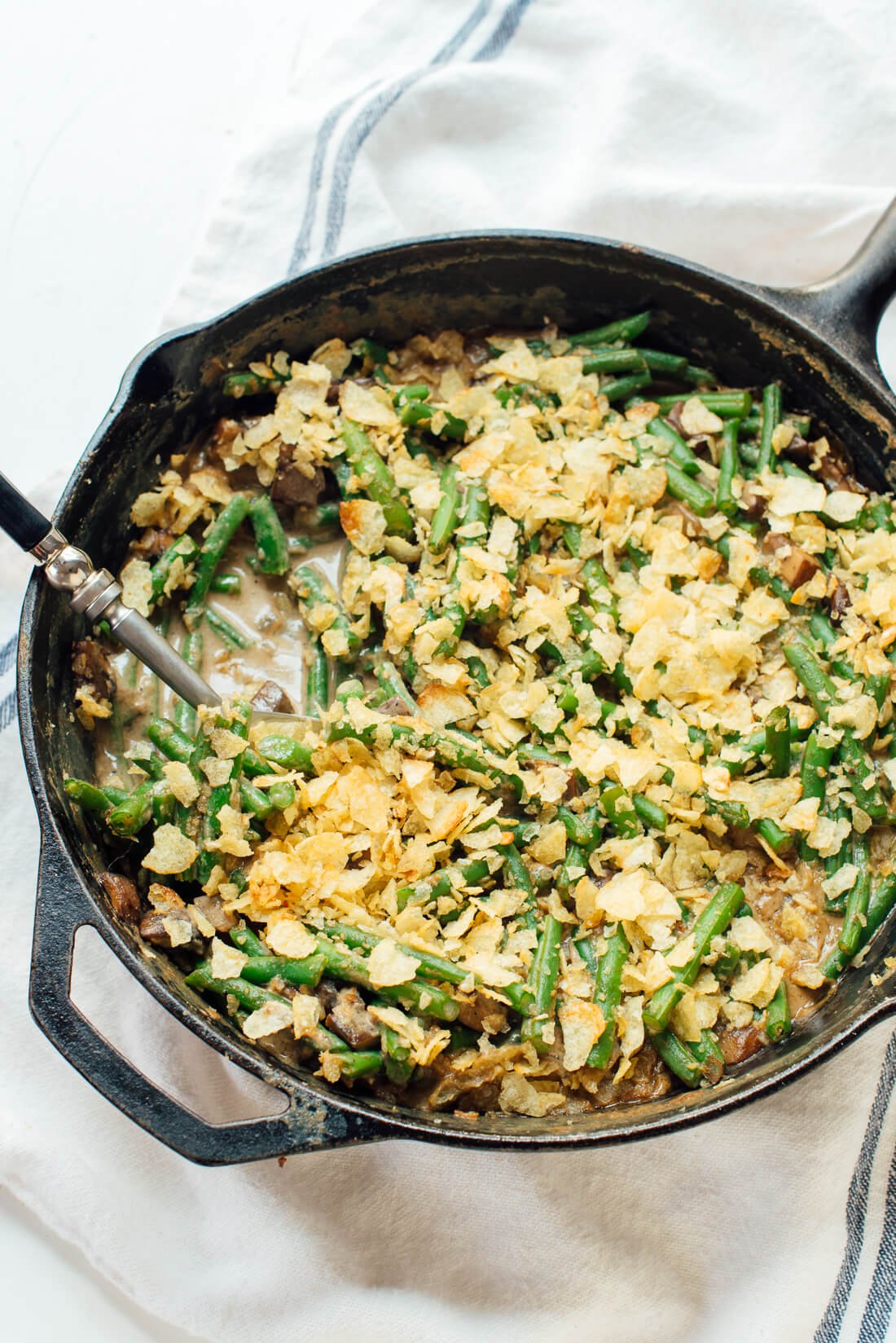 This post is brought to you by Kettle Brand Chips.

Turkey and Great Grandmother Lucille’s twice-baked cream cheese mashed potatoes recipe were constants either way. I really need to figure out a more redeeming version of that recipe, because it puts all other mashed potatoes to shame. 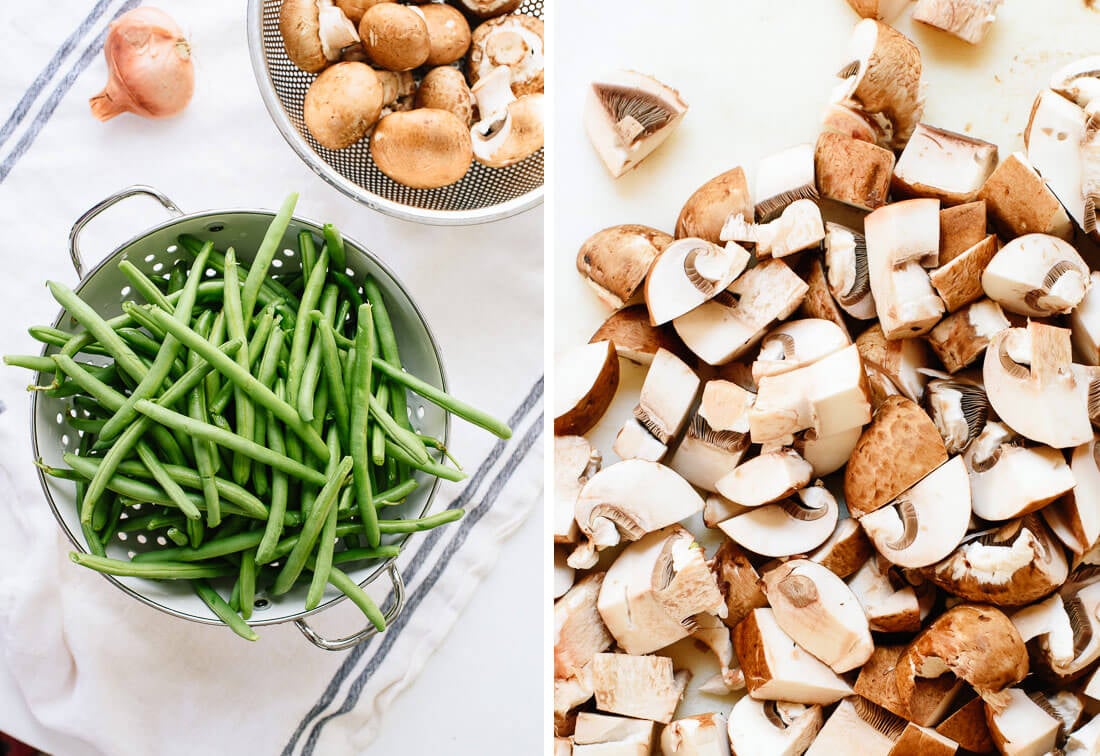 My first experience making green bean casserole was in college when I signed up to make it on our Friendsgiving menu list, for reasons that I still can’t explain. This was before I knew how to cook, so I Googled the recipe and went with one of the top picks.

Canned mushroom soup, canned green beans, canned fried onions. Easy enough to manage, but I was put off by the canned mushroom soup. I didn’t like the final result much, but my friends did, probably because that’s what they had grown up eating. 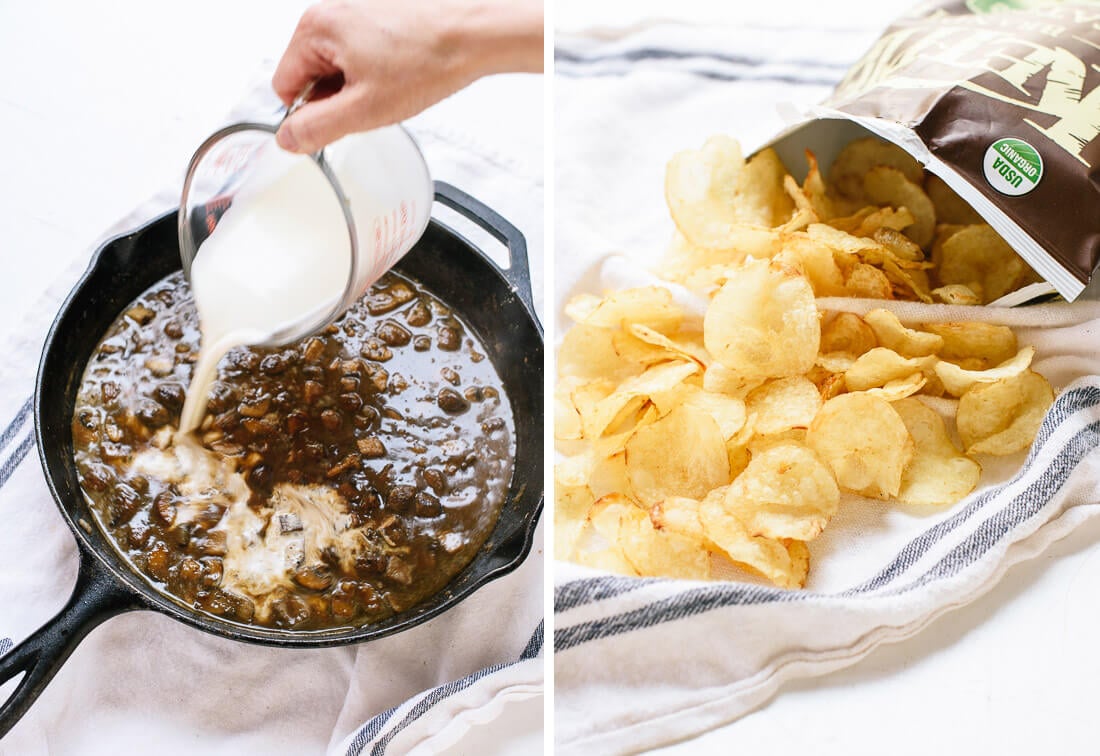 I used one shortcut, which might sound a little crazy, but hear me out. I used crushed potato chips instead of homemade or store-bought fried onions, for several reasons.

For one, homemade fried onions are tricky. You have to either deep-fry them, which uses a ton of oil and makes your entire house smell like fast-food onion rings for days. Or, you can attempt one of the baked “fried” onion options, which produce inconsistent and not-quite-awesome results.

Store-bought fried onions tend to contain some suspect ingredients, as well as flour, which means that they’re not gluten free. I’m not a gluten-free eater myself, but several of my closest friends are, so the wheat in the store-bought option was problematic for Friendsgiving. 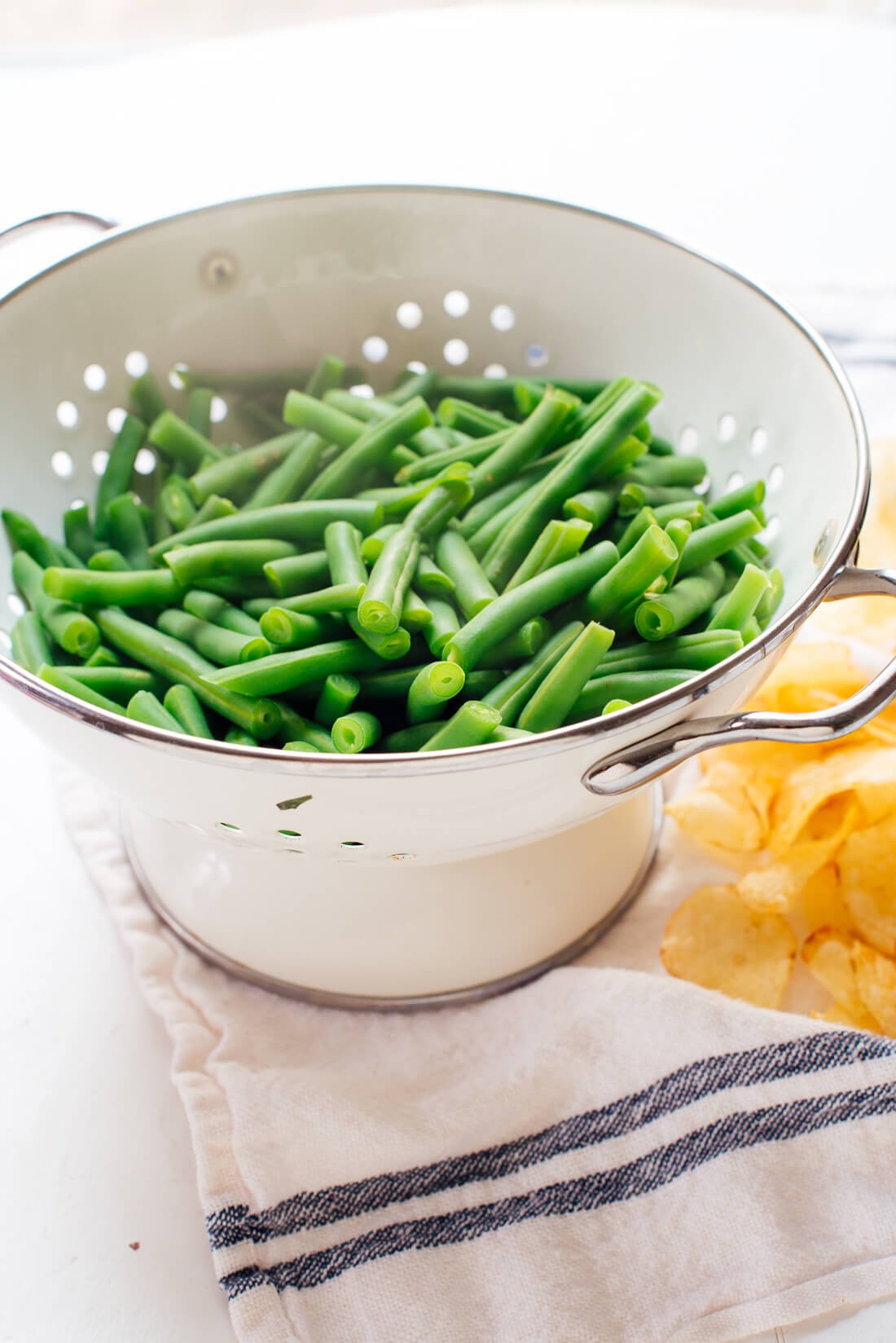 I used Kettle Brand Chips’ amazing organic sea salt chips, which are made of organic potatoes, organic vegetable oil (safflower and/or sunflower oil) and sea salt. Man alive, they’re so good. Don’t get me going about the necessity of air pockets in chips; Kettle Brand Chips have lots of them.

To make up for the missing onion flavor in the topping, I cooked the mushrooms with lots of chopped shallot. I used just half the amount of half-and-half that most other recipes call for, too, so the flavors really shine through. (See my recipe notes for dairy-free alternatives.) Most of the creaminess of the mushroom mixture comes from the roux, anyway, which is formed when you cook the flour in butter and add liquid. 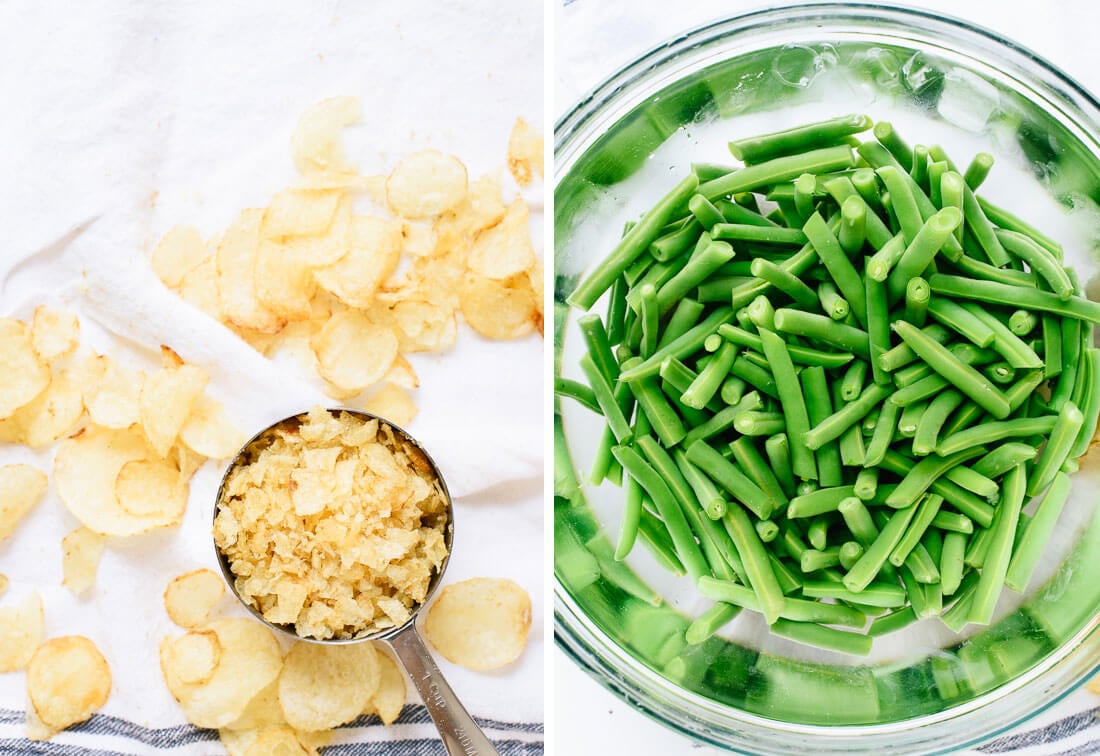 In the making of this recipe, I learned a few tricks to making epic green bean casserole. For starters, you have to use fresh green beans. Even the pre-trimmed varieties might have some stringy bits attached, so be sure to trim those off yourself. Then, cut the green beans in half so you don’t have any extra-long green beans poking out of the casserole.

You’ll need to blanch the green beans for a few minutes before you mix them into the mushroom mixture (this step is super easy). Otherwise, your green beans will still be tough by the time the rest of the casserole is finished baking.

Another key is to lightly brown the mushrooms when you add them to the pan. That coaxes tons of savory flavor from your average grocery store baby bellas. Medium-high heat does a good job of browning the mushrooms, but soon the pan starts smoking, so just under medium-high heat is the way to go. 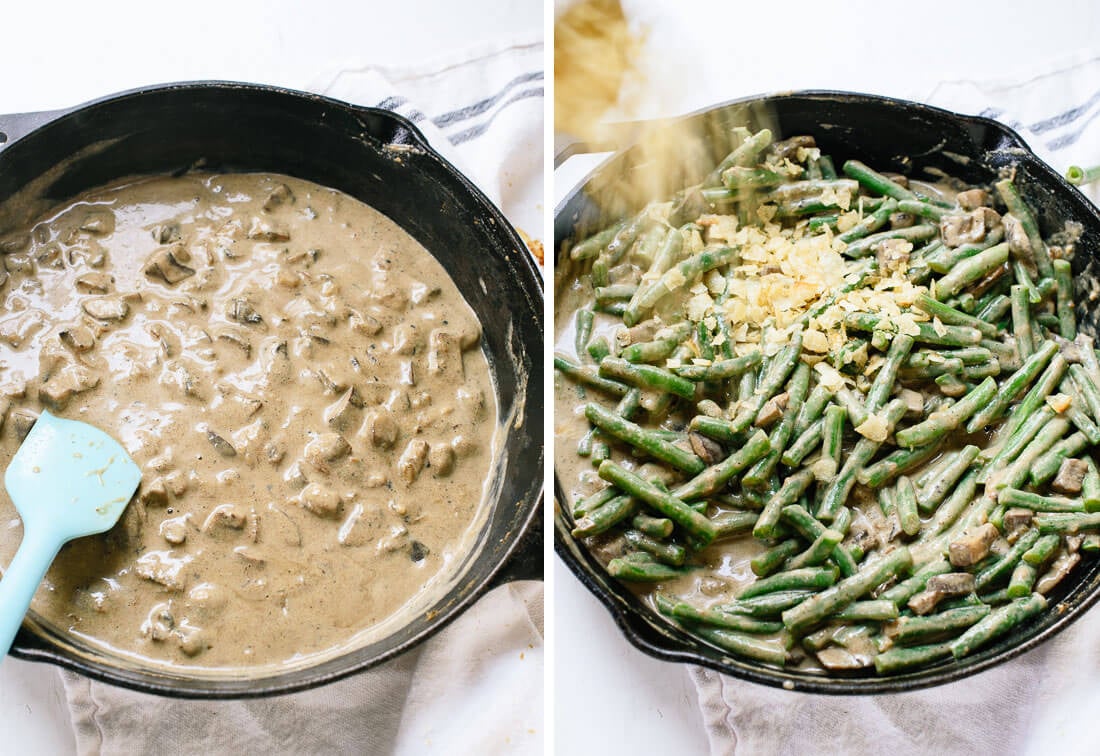 As we’re entering an especially indulgent season, and in light of last week’s events, I’ve been pondering how to give back more. This year, maybe Friendsgiving can help feed kids in need.

Join Kettle Brand and sign up to host a Friendsgiving for No Kid Hungry and you can do some serious good this holiday season. I was too late to sign up our own Friendsgiving, but it’s never too late to donate. I just did, and hope you’ll join me! 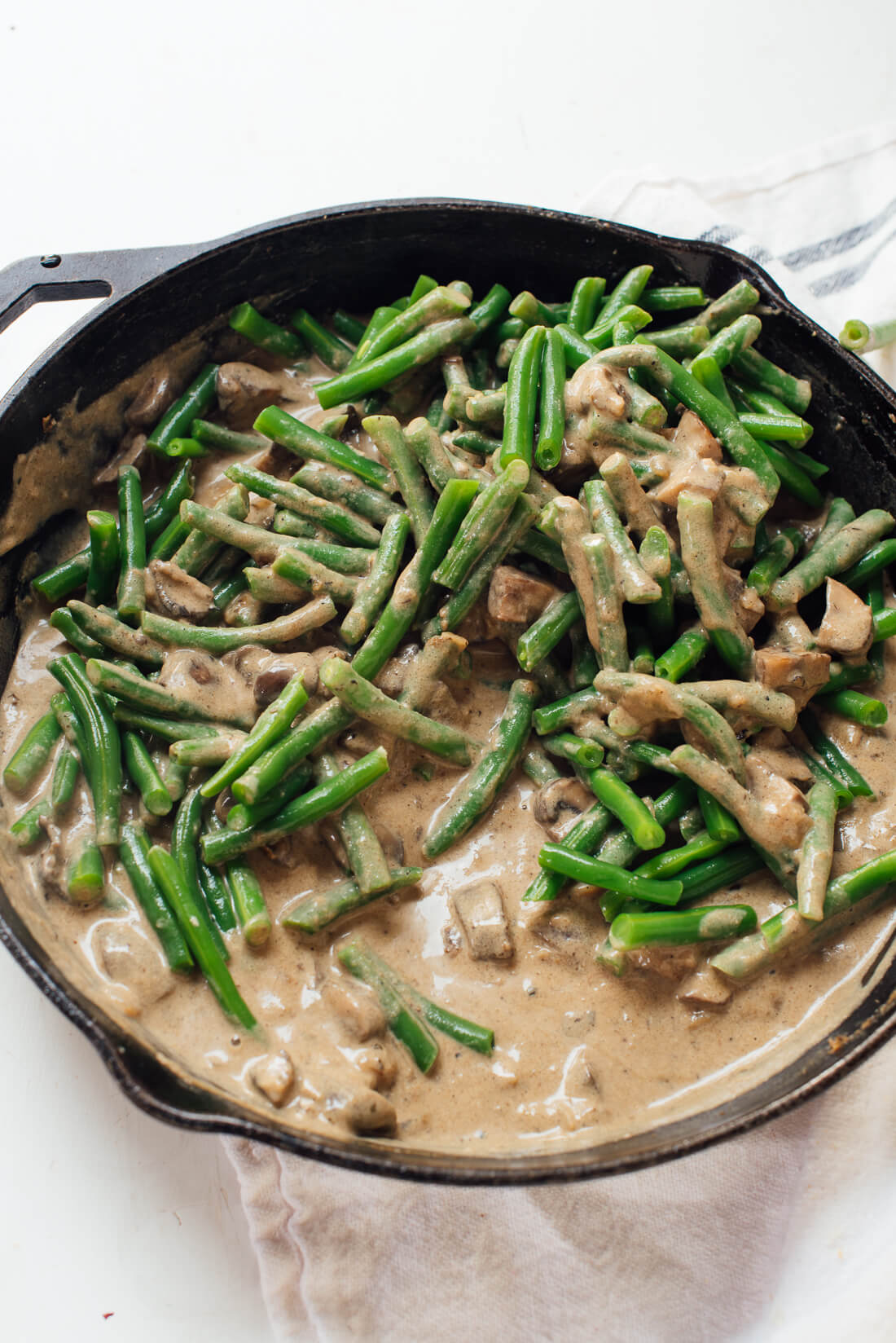 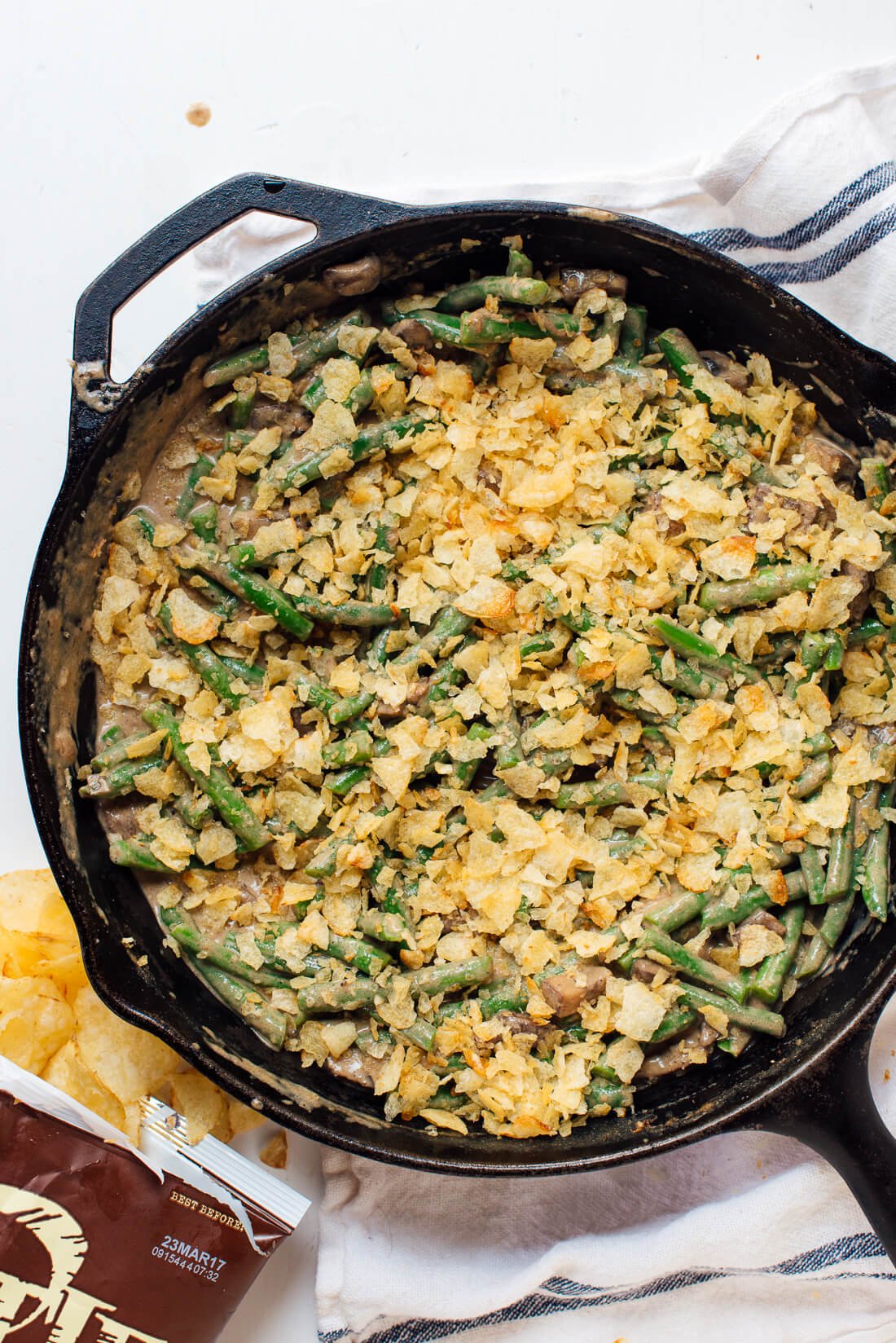 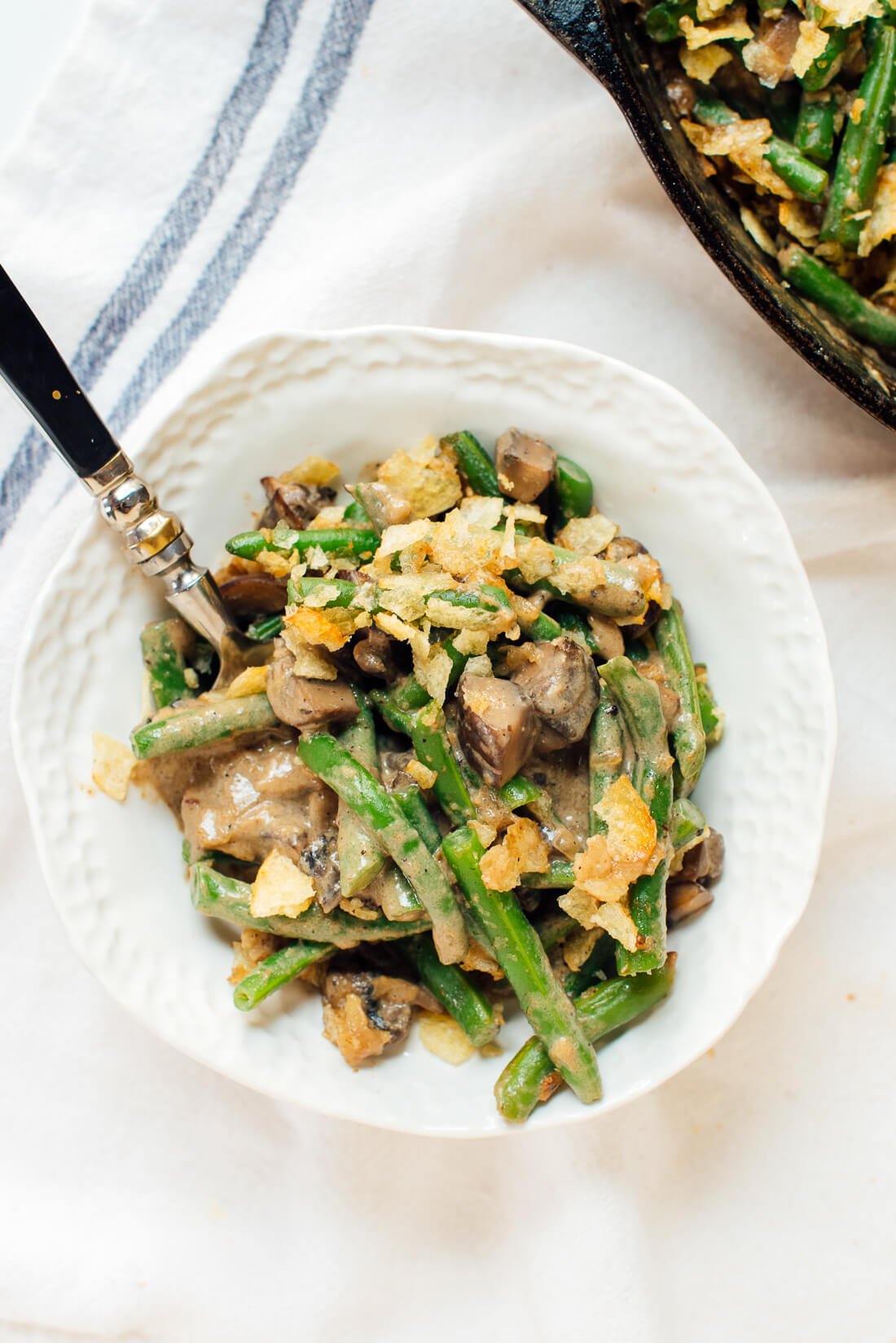 This delicious green bean casserole is loaded with fresh green beans and mushrooms (no canned ingredients here). I took one shortcut with the topping and used crushed high-quality potato chips instead of fried onions. That means this recipe is significantly easier to make than home-fried onions, and it’s easy to make it gluten free. Recipe yields 6 to 8 side servings.

This post was created in partnership with Kettle Brand Chips. Opinions are my own, always. Thank you for supporting the sponsors who support C+K!