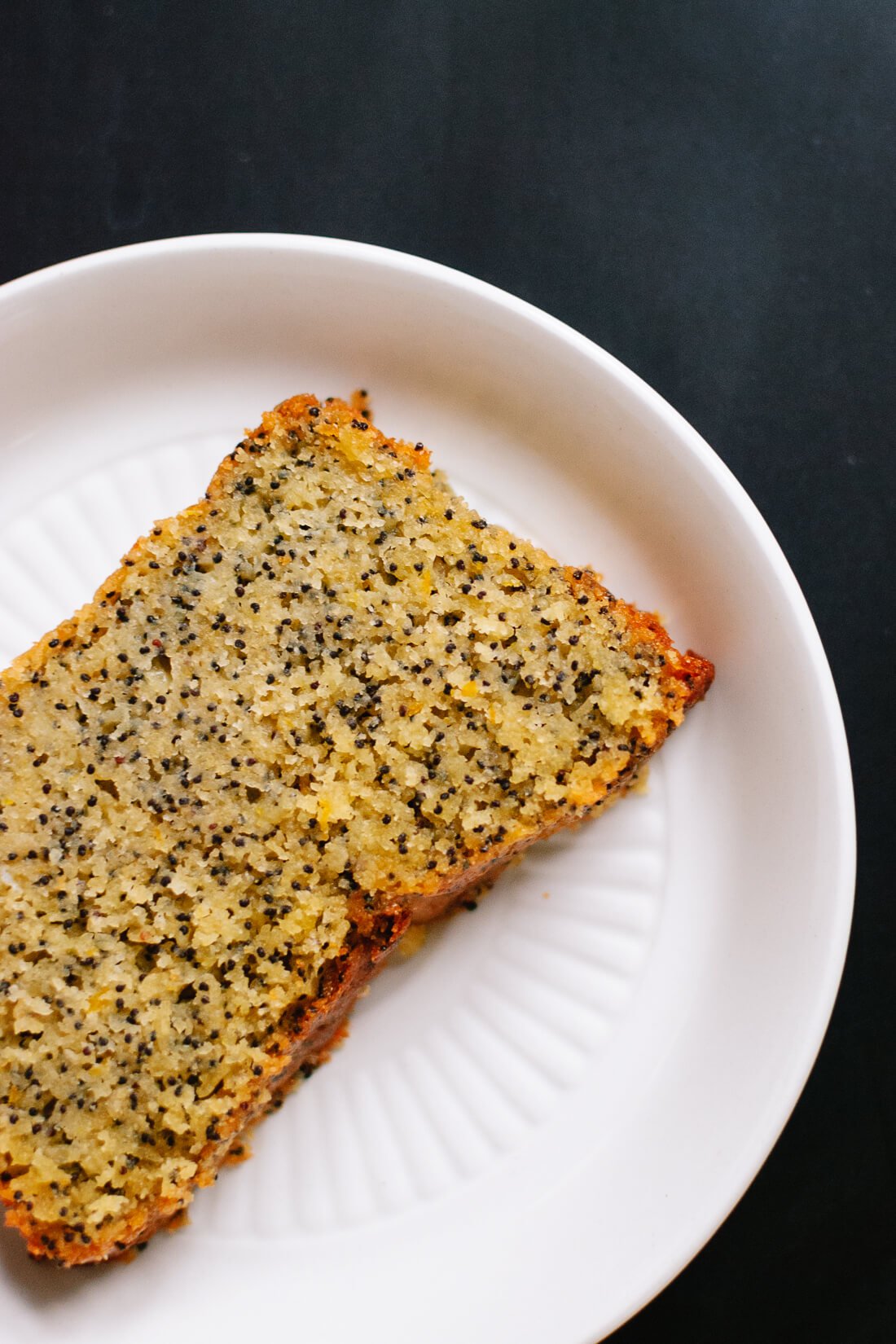 I missed my brother’s birthday last week. I’ve attended every one of his birthday celebrations until this year. I suppose 23 out of 24 is still pretty good, but I wish I could have been there. My dad sent me a picture of my two younger brothers sitting side-by-side on a restaurant booth at the birthday dinner. They’re are all grown up now, transformed from ornery boys into strapping young men. My burly baby brother is even sporting a new mustache. I’ll let it slide.

When we were little, I couldn’t appreciate our age differences. I was the smarty-pants older sister and I called them out on all their dumb mistakes. I really regret that I didn’t offer more supportive words when they did things right. If I could go back in time, I’d tell my younger self to let my brothers be boys. LET THEM BE BOYS. 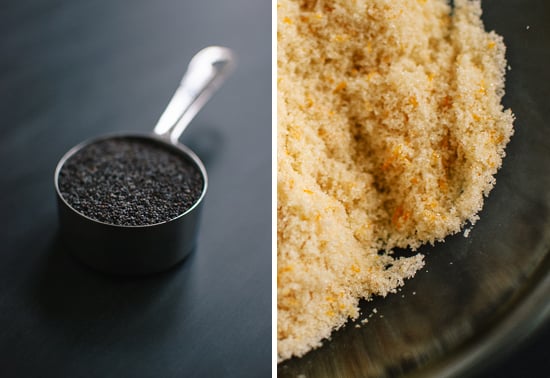 IF I had been able to make the five hour drive home for my brother’s birthday, I would have made him this cake. It’s not too sweet so I think he would like it. My obsession with the concept began the moment I laid eyes on Melissa Clark‘s blood orange olive oil cake recipe while sitting cross-legged on a hotel bed in Atlanta with In the Kitchen with A Good Appetite. Blood oranges, olive oil… in a cake. Bonus points for yogurt. 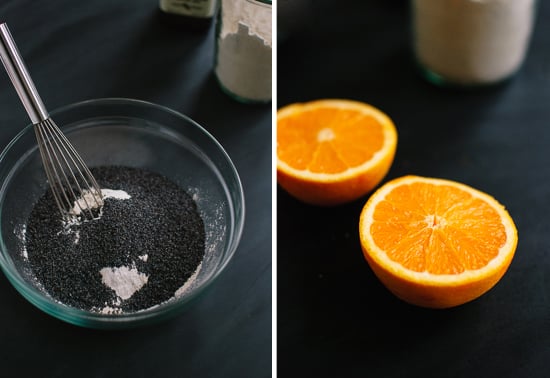 I noticed that Melissa’s recipe called for the same amount of flour as my honey whole wheat banana bread recipe and started wondering if I could substitute honey for the sugar. She referenced the original source of her recipe, Dorie Greenspan, so the next thing you know I’m googling Dorie’s recipe on my phone and taking notes on the differences in proportions. What liquid would I decrease to make up for the addition? How much yogurt and oil and orange juice should I use? My head started to hurt from all the math so I eventually gave up and went downstairs.

My subconscious wouldn’t let the idea go, though. At home several days later, I came across A Cozy Kitchen’s grapefruit-thyme pound cake, which reminded me of that Ina Garten yogurt cake I’d bookmarked ages ago. And what do you know, that recipe is so similar to Dorie’s French yogurt and olive oil cake. Then I’m googling all of them at once, tabs galore, and go figure, Deb has made them all. I was zooming into her pictures to see the crumb for each recipe and still wondering about replacing the sugar with honey and which citrus flavors and I realize, I am totally crazy. LET IT BE CAKE. 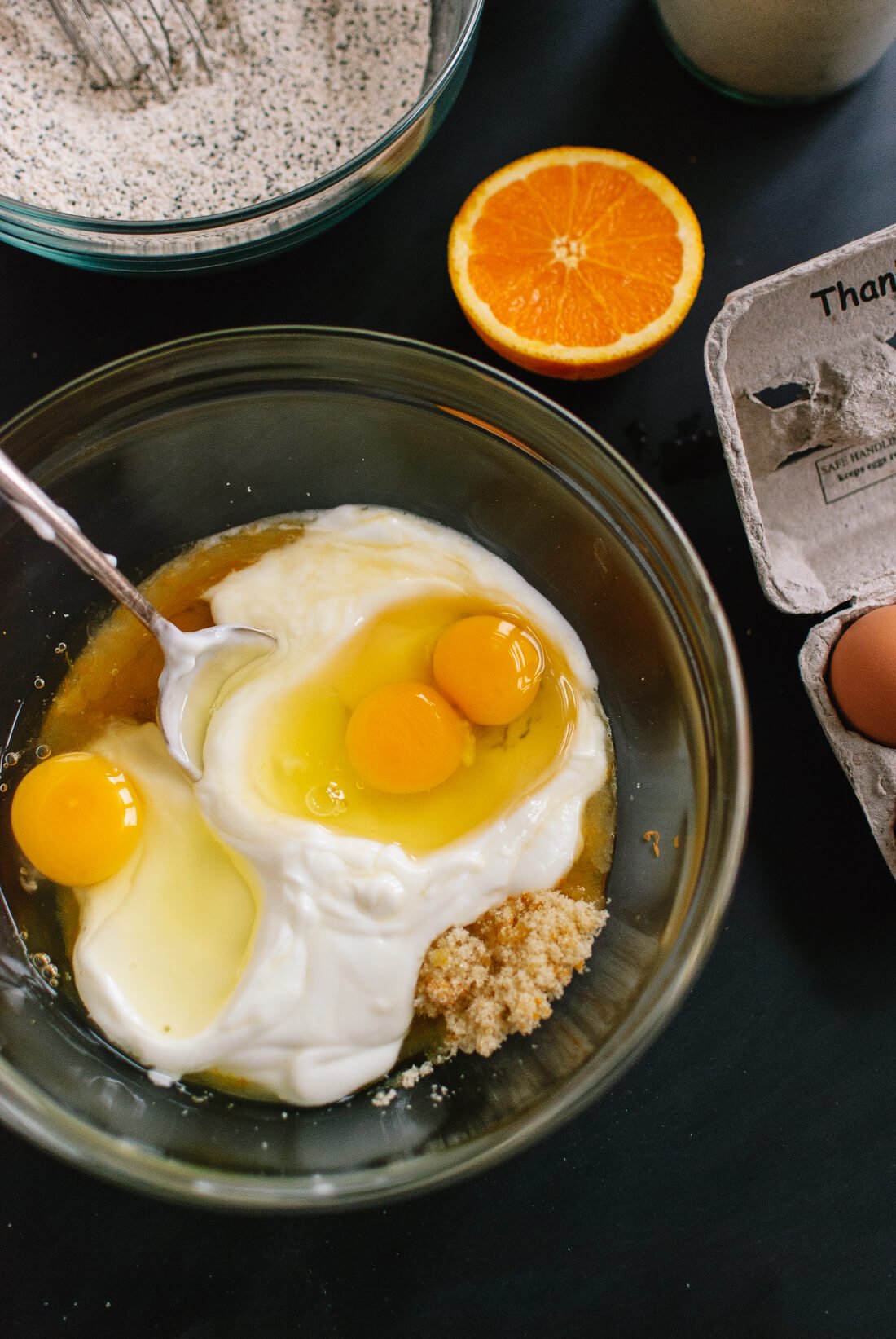 So I let it be cake, and I ended up with what I like to call, “orange poppy seed pound cake”. The longer name would be “orange, poppy seed, olive oil and yogurt loaf cakey-bread”. This cake has the dense texture and light sweetness of pound cake.The subtle herbal notes of the olive oil hide behind the pervasive orange flavor in the poppy seed-studded crumb. It’s a simple cake that doesn’t required an electric stand mixer (none of my recipes do). You might notice that my loaf didn’t poof up in the middle, but I loved the resulting dense texture.

The cake is a combination of all the recipes referenced. The basic proportions came from Ina’s recipe, but I used orange juice in the loaf like Melissa, rubbed the orange zest into the sugar like Dorie did with lime, and took Deb’s suggestion of adding 1/3 cup poppy seeds to the batter. I used olive oil instead of Ina’s vegetable oil; I think you could substitute coconut oil for the olive oil for a more tropical flavor. 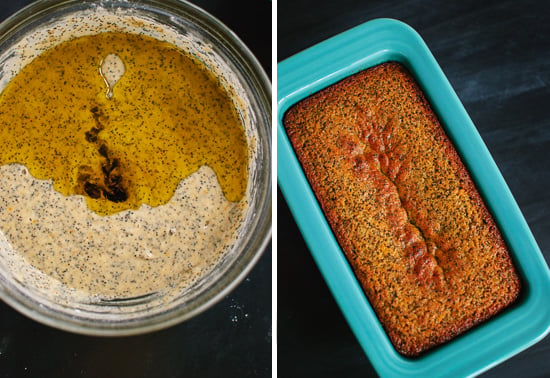 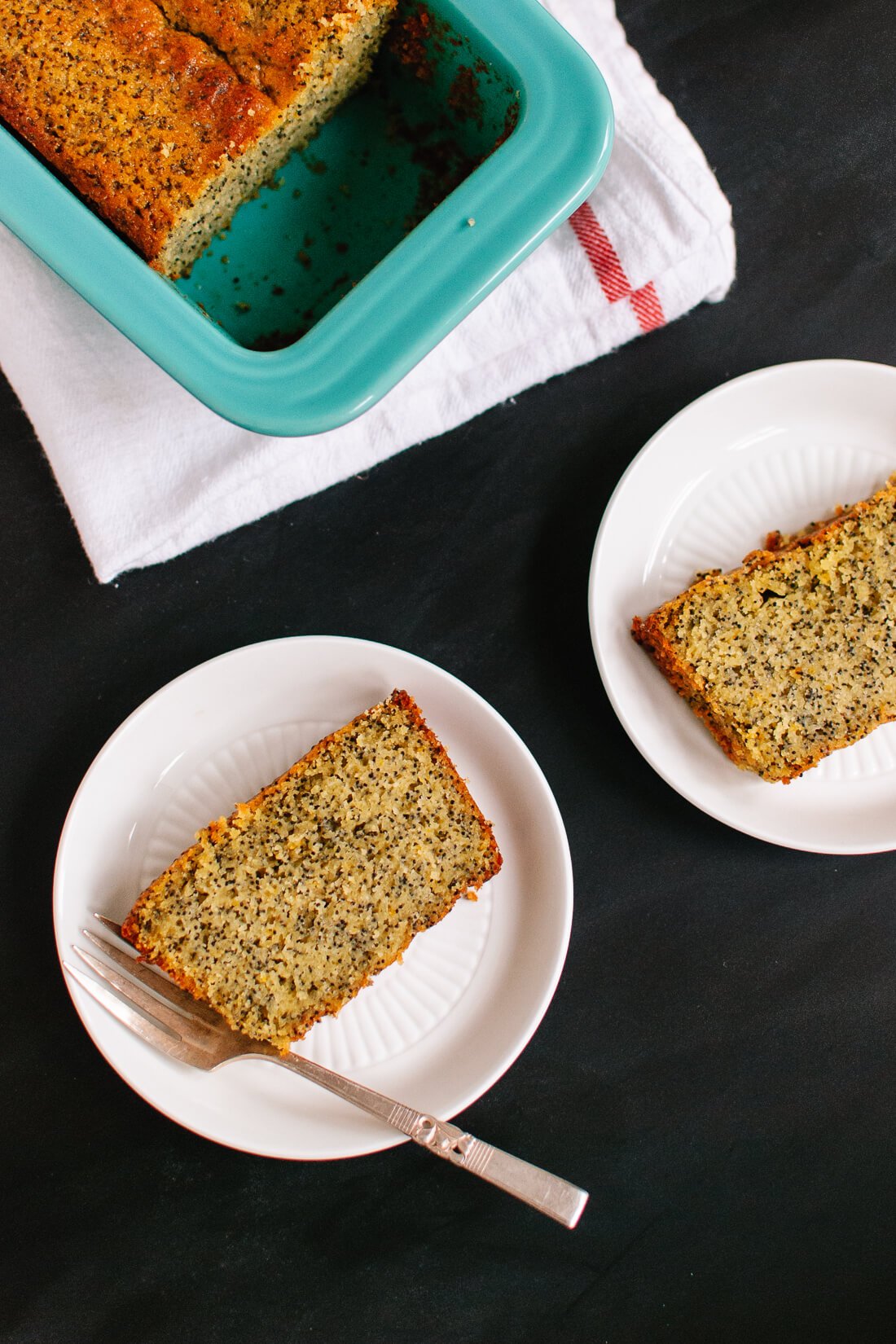 If you want to debate the healthfulness of this cake, I suppose that how “healthy” this cake will be for you depends on your definition of the term. This cake is most certainly better for you than a traditional pound cake, which—fun fact—calls for a pound of flour, pound of butter, a pound of sugar and a pound of eggs. If you try to avoid gluten, dairy and sugar, perhaps this cake is not for you. However, I do have a recipe for vegan chocolate cake, and a maple-sweetened tea cake. And if you’re gluten-free, might I offer you some cookies instead? 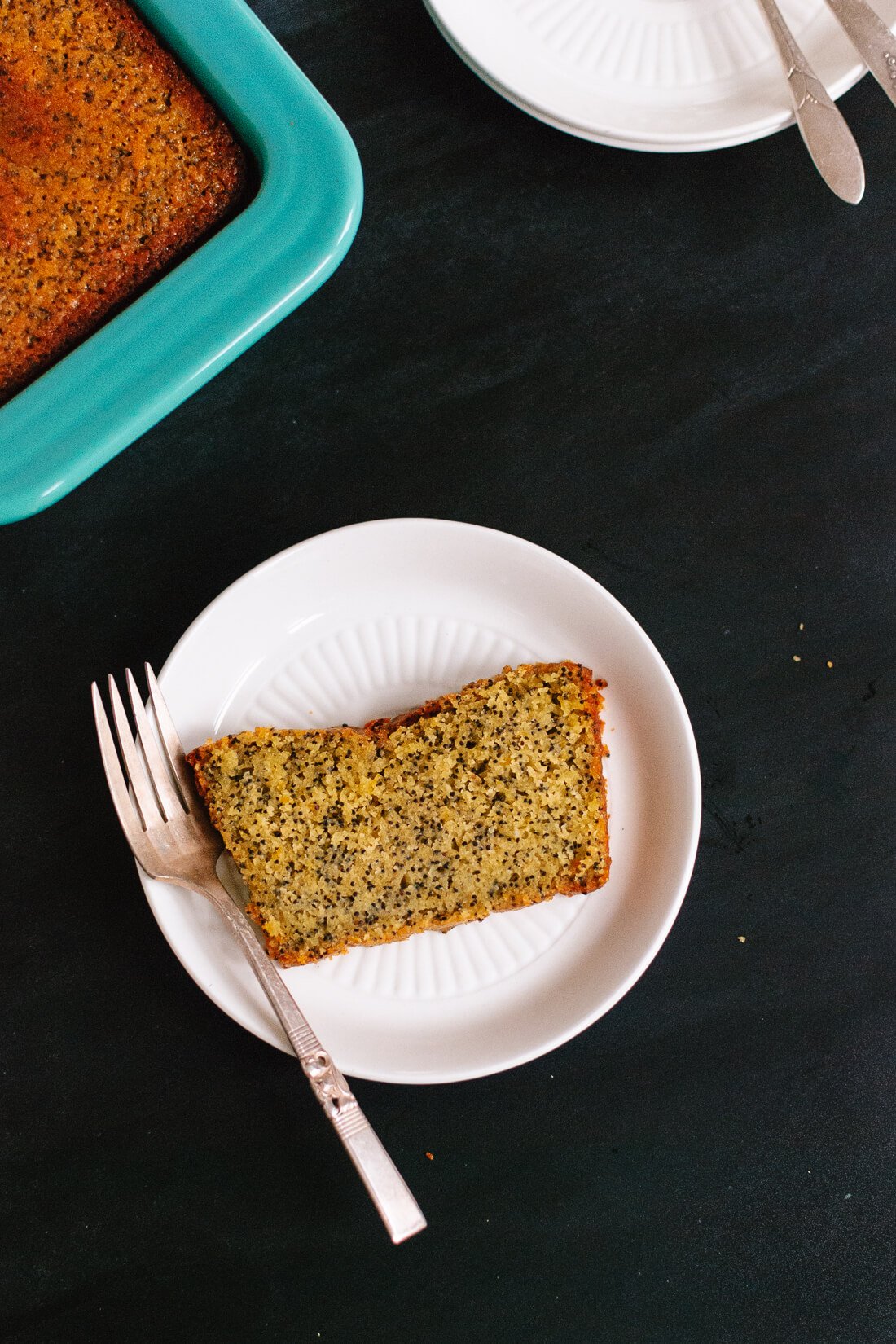 Lightened-up orange poppy seed pound cake cheers up chilly days. Made with whole wheat pastry flour, olive oil and yogurt, this pound cake is healthier than most. Serve slices as is, or add a scoop of ice cream for dessert or yogurt for breakfast.