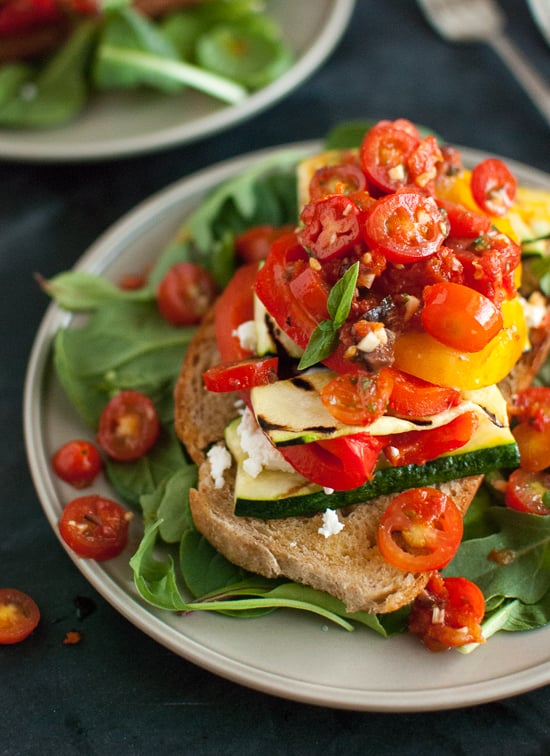 Summer is tomato season. I realized that fact just a few years ago, which in hindsight seems kind of silly and even borderline ignorant. I remember, as a little girl, skipping over the lush, green bermuda grass in my grandmother Mimi’s backyard to the little vegetable garden where she grew tomatoes. Those tomatoes smelled warm, the vines pungent, and now that I think about it, it was always hot outside when I smelled that smell.

Why did it take me so long to understand that tomatoes are seasonal, and meant to be enjoyed in the summer? 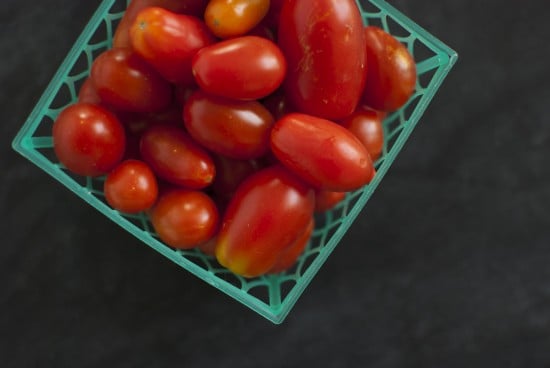 It must be because tomatoes are available all the time. Growing up, I saw them on burgers and salads year-round. I didn’t notice that in the winter, they were pale, mealy and far from the juicy flavor explosion that homegrown summer tomatoes can be in the summer. Sometimes it’s a matter of opening our eyes and experiencing that first incredible bite of a perfect tomato.

It was only a month ago when I became aware of more unfortunate realities surrounding those subpar store-bought tomatoes. Nicole of The Giving Table, a champion for ethical eating, asked me to participate in her latest cause, Food Bloggers for Slave-Free Tomatoes. “Slave-free tomatoes?” I thought. “Isn’t everything grown in the United States in 2012 slave free?!” Unfortunately, no. 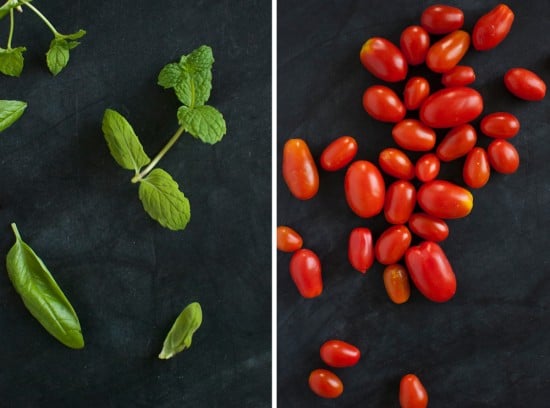 I picked up my copy of Tomatoland by Barry Estabrook, which I’ve had since before Christmas but had yet to crack open. My eyes got bigger and bigger as I read the introduction, and when I got to the following few lines, my heart sunk.

When I asked Molloy if it was safe to assume that a consumer who has eaten a fresh tomato from a grocery store, fast food restaurant, or food-service company in the winter has eaten a fruit picked by the hand of a slave, he corrected my choice of words. “It’s not an assumption. It is a fact.” 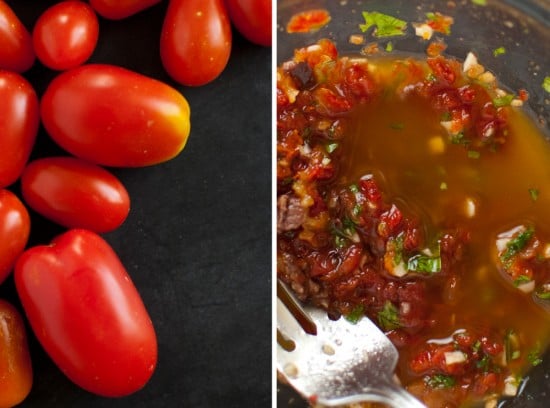 So I’ve eaten a tomato picked by a slave. You probably have, too. Let’s pledge not to let that happen any more. Sign this letter to help end modern-day slavery in U.S. tomato fields. (It takes less than 30 seconds.) 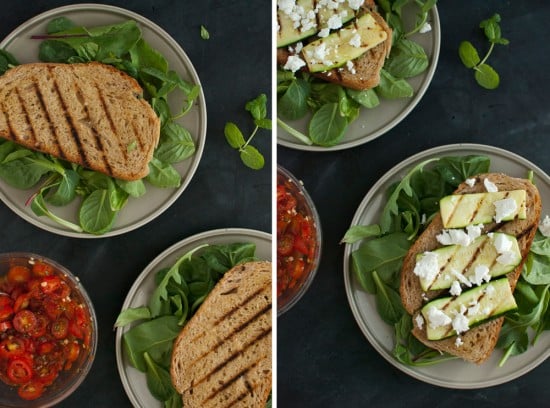 I don’t want to eat anything that was handled by someone forced to work against his or her will and I know you don’t, either. Let’s choose slave-free tomatoes from here on out. Ripe, locally grown tomatoes always win in the flavor department, and knowing that they were grown in ethical conditions makes them taste that much sweeter.

I buy my tomatoes at the farmers’ market, or from local farms like Freedom Farms or Peach Crest Farm through Native Roots Market or Natural Grocers. Shopping at quality stores like these, that put forth the extra effort to source locally grown tomatoes, goes a long way. You can also shop at Whole Foods or Trader Joe’s, which are two national stores that have pledged to sell only slave-free tomatoes. And remember, tomatoes are summertime delights. They aren’t worth eating in the winter, so get your fill now! 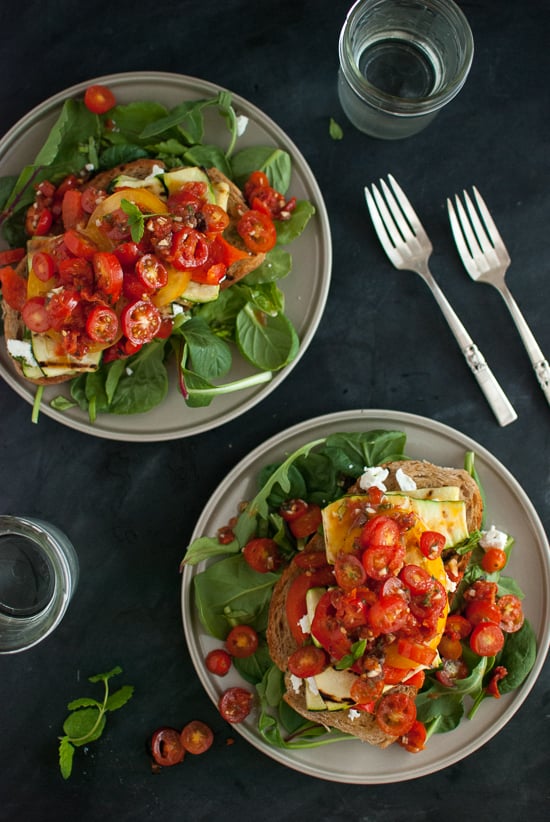 The following information provides a more thorough summary of the issue.

The Problem: Slavery is not just happening overseas. Chief Assistant U.S. Attorney Douglas Molloy once called Florida’s tomato fields “ground zero” for modern-day slavery in the United States. In the
past 15 years, over 1,000 people have been freed from slavery in U.S. tomato fields.

The Solution: Recipe for Change–a campaign led by International Justice Mission in partnership with the Fair Food Standards Council and the Coalition of Immokalee Workers–is targeting three major supermarket chains this summer (Ahold, Publix and Kroger’s), and asking its CEOs to support the Fair Food Program. Corporations that join agree to pay a small price increase for fairly harvested tomatoes (1.5 cents more per pound), and promise to shift purchases to the Florida tomato growers who abide by these higher standards–and away from those who won’t.

What you can do: Supermarkets can help eliminate slavery and other serious abuses from the tomato supply chain when they join the Fair Food Program. But in order to change its policies, CEOs need pressure from consumers. Sign the letter now and make a point to buy slave-free tomatoes from here on out.

For further information, check out Mark Bittman’s article in The New York Times called “The True Cost of Tomatoes” and read Tomatoland: How Modern Industrial Agriculture Destroyed Our Most Alluring Fruit. If you want to do more, check out IJM’s Recipe for Change for suggestions. 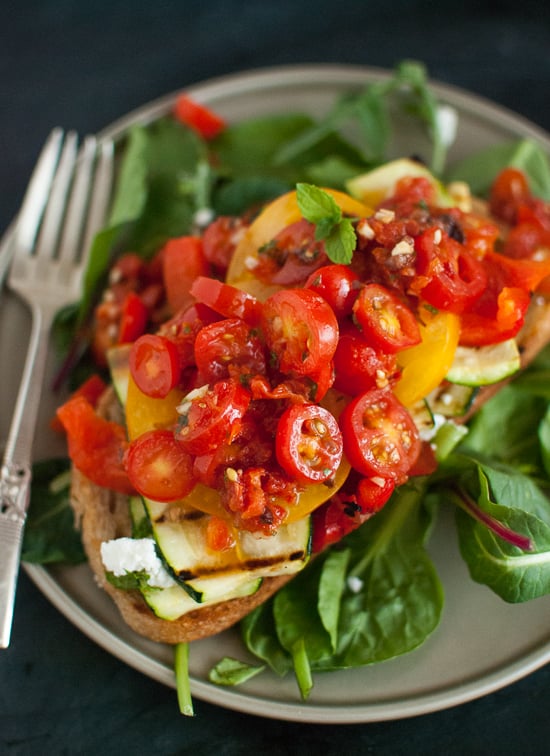 A beautiful display of summer vegetables at their peak. This salad consists of grilled vegetables piled high onto a slice of country-style grilled bread, topped with goat cheese, herbs and double tomato dressing. The instructions are long, but don’t worry, the individual steps are not too difficult.

For links to other food bloggers participating in Tomato Tuesday, visit The Giving Table.