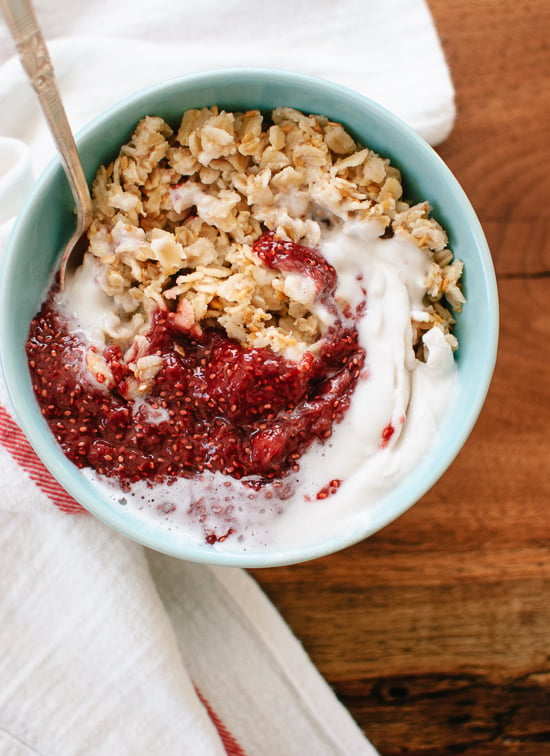 Other potential titles for this post included, “Three of my favorite things” or “Recipes I’ve Been Meaning to Tell You About.” I’ve been feeling under the weather for the past week, but now that I can finally smell and taste properly again, I’m back to make up for my absence with three recipes in one. (A better blogger would have recipes on reserve for occasions like these, but then again, I have to be sufficiently excited about a recipe to post it and I could hardly stand to sit on a good one.)

Each component is delightful on its own, but they just so happen to combine marvelously well in one breakfast bowl. Nutty, fruity, creamy—yes, more, please. 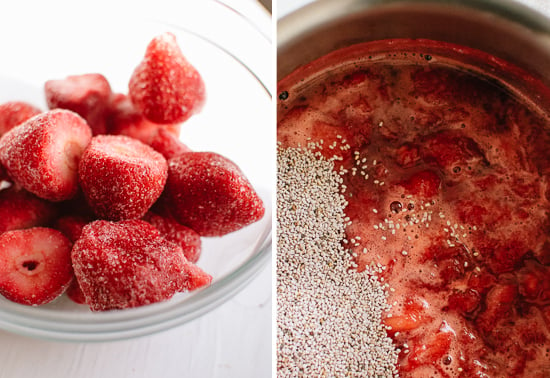 I’ll give you a rundown of each. The oatmeal cooking technique, which I discovered in Megan Gordan’s Whole-Grain Mornings cookbook, yields nutty and fluffy (not at all mushy) oatmeal.

The strawberry chia jam utilizes summer’s finest [frozen] strawberries, a dollop of natural sweetener and thickens with the help of “superfood” chia seeds. It cooks down in under thirty minutes and tastes much fresher and brighter than store-bought jams.

Lastly, coconut whipped cream has already taken the internet by storm, for good reason. I like it just as much, if not more than, freshly whipped cream. It’s better for you, too. 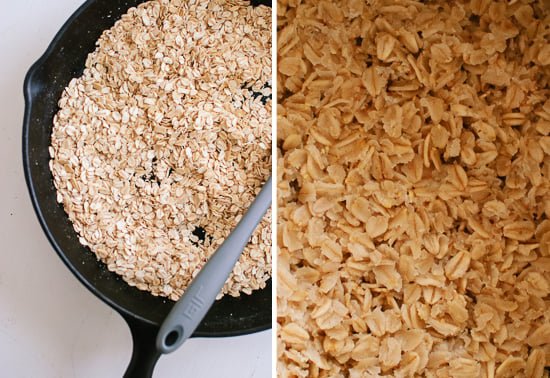 Since I haven’t been feeling well, I’ve been paying extra attention to the fuel that I’ve been consuming. I’m not a nutritionist, but I believe that this breakfast is excellent fuel. It’s full of whole grains, seeds, fruit and healthy fat. And more than that, it’s crazy delicious and brightens up dreary winter mornings with a swirl of shocking pink. Can’t beat that!

I should mention that while I was snuggled up with sweet Cookie in front of the TV (House of Cards season two!), I researched foods that heal and fight inflammation. The internet says those foods are vegetables, fruits, whole grains, seeds… everything I’m already accustomed to eating! High five, self. Way to treat yourself kindly, recipe makers. Hope you enjoy these recipes as much as I do. 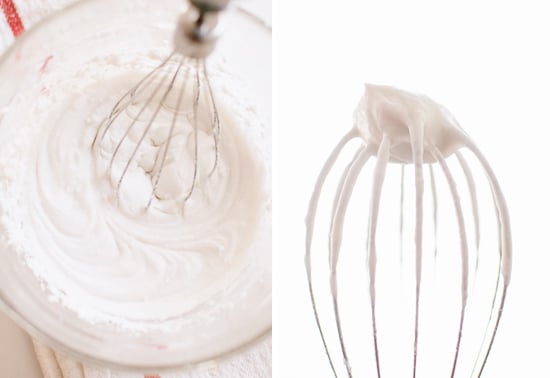 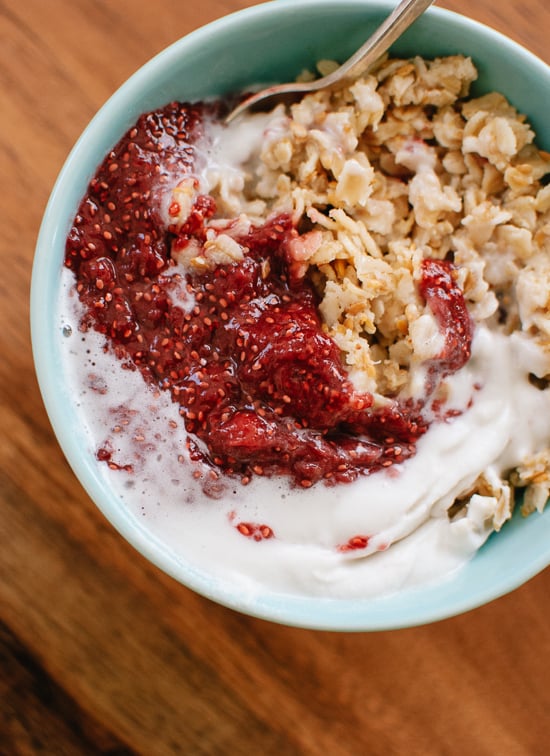 Three healthy recipes in one bowl: the best toasted oatmeal, (frozen) strawberry chia jam and coconut whipped cream. This breakfast is easily vegan and gluten free (see notes). If you’re making the coconut whipped cream, be sure to chill your coconut milk overnight, and place your mixing bowl in the freezer at least 30 minutes.

Strawberry chia jam (yields about 1 cup, you might want to double these amounts so you’ll have more for later)

Oatmeal recipe adapted from Megan Gordan’s Whole-Grain Mornings cookbook. Chia jam and coconut whipped cream cooking techniques adapted from Angela Liddon’s forthcoming The Oh She Glows Cookbook. (You can pre-order it now! Angela has a step-by-step coconut whipped cream tutorial here and a recipe for blueberry vanilla chia jam here.)
*On using frozen berries: I really recommend frozen berries for this jam. They break down especially well once heated and taste better than off-season berries. Angela says that fresh strawberries don’t break down as well as other berries, so if you’re using fresh strawberries, she recommends breaking them down in a food processor before cooking.
Recipe yields 2 very large or 4 moderate portions. Store leftover components separately in the refrigerator, covered. You might want to add a bit of water while reheating the oats.
Make it gluten free: Use certified gluten-free oats.
Make it vegan: Use coconut oil instead of butter and maple syrup or agave nectar instead of honey.
If you want to add more protein to this breakfast, top your oatmeal with nuts and/or Greek yogurt.