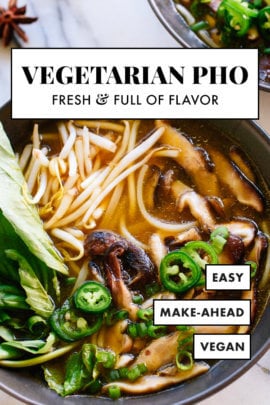 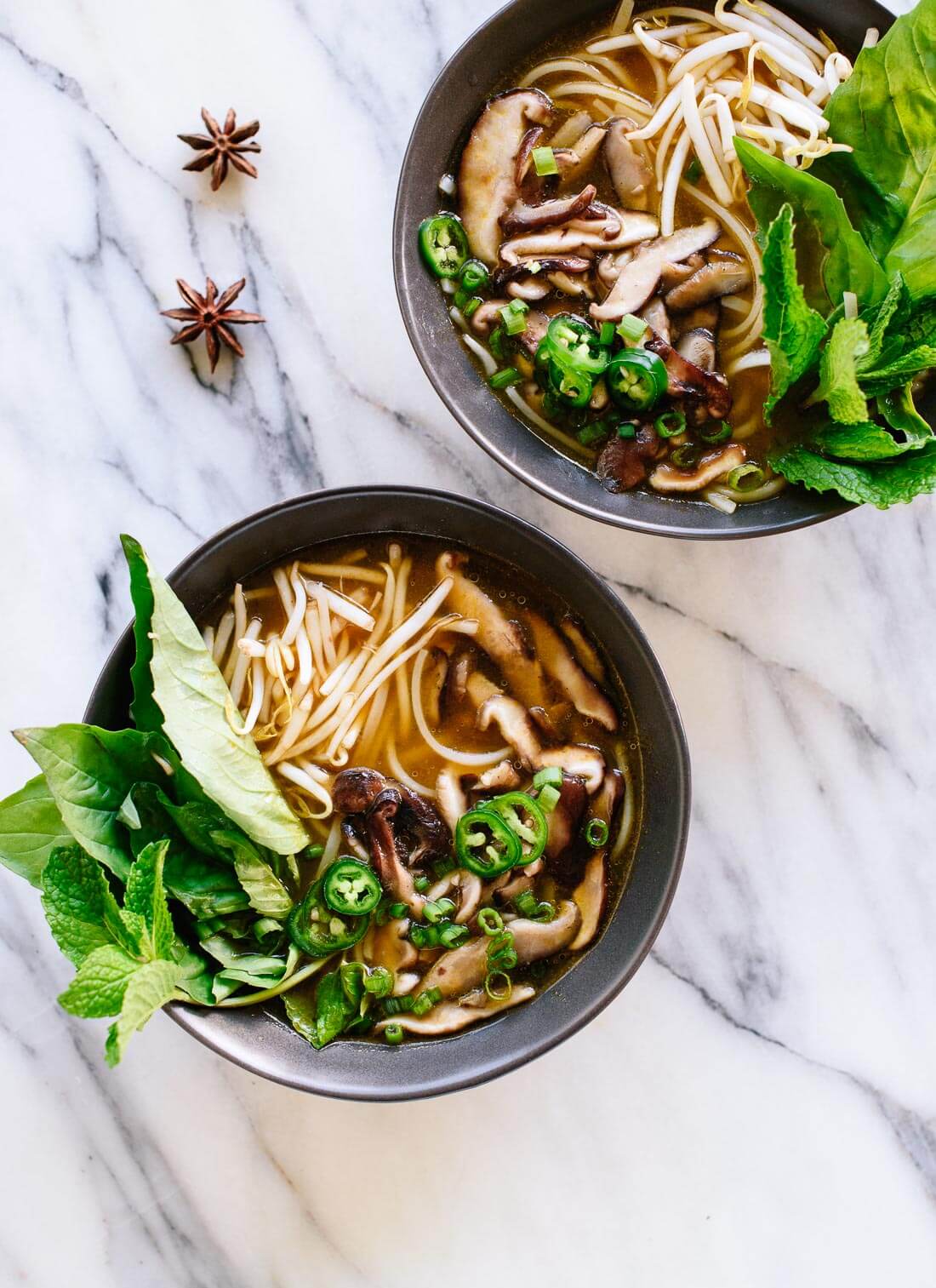 This post is brought to you by Frontier Co-op.

Hallelujah! I finished my cookbook. Photos are finalized and uploaded; every sentence has been double-checked for accuracy. We even made “Cookie + Kate” bigger on the cover, thanks to your feedback. I can’t wait for you to see it on May 16th!

The minute I sent off the final draft of my book, I started plotting my next vacation. I’ve felt tied to the book project for the past year and a half, both mentally and physically. As rewarding as it’s been to produce a book that I’m 100 percent proud of, it’s been way too long since I got a break—a real, true, mind-clearing break. 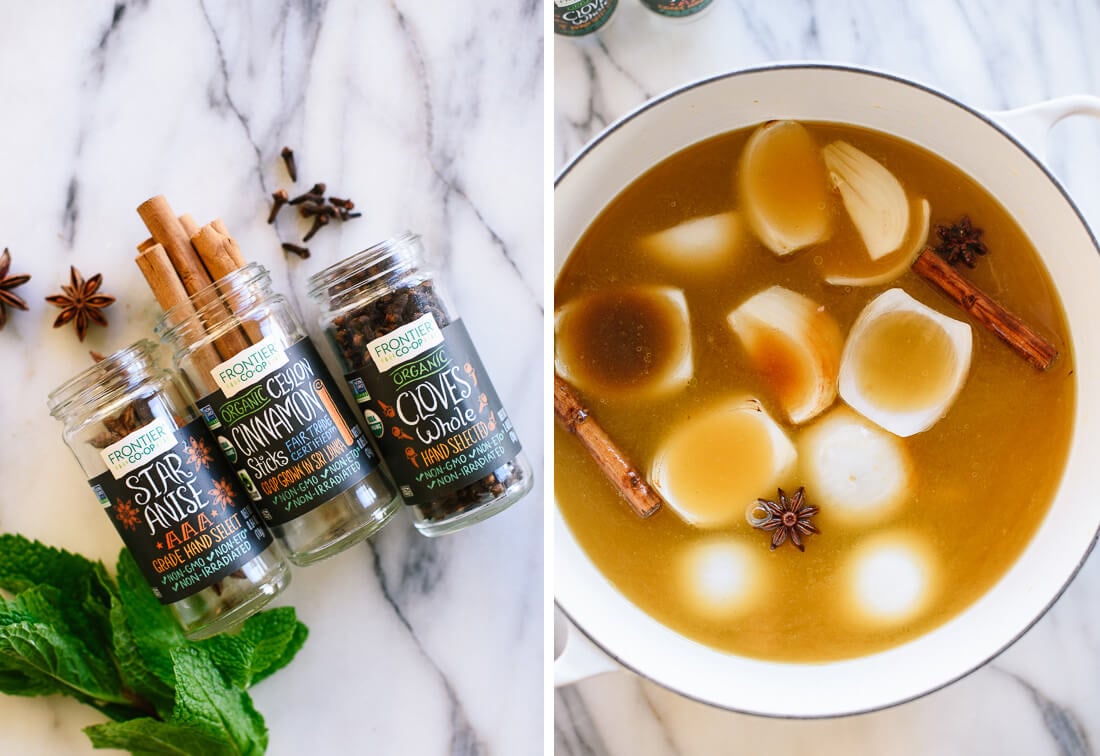 On my list for this year? A yoga retreat in Morocco (booked!), exploring Costa Rica with Grandma Virginia (she’s been dying to go), and who knows, maybe Southeast Asia or Iceland for good measure. Is that too much? The answer I’m looking for is, “No!” I’m suffering from a serious case of wanderlust and a palpable sense of urgency to go now—right now, post-cookbook, while I’m still young and fancy-free.

To appease my travel cravings for now, I’m cooking up some exotic recipes in my kitchen, including Vietnamese pho. It’s hot, comforting and fresh, and fills the house with warming aromas of cinnamon, anise, cloves and ginger.

I used Frontier Co-op’s organic whole spices here. I always enjoy reading their labels as I cook, knowing that they give back to the communities where they source their spices. The cinnamon sticks and cloves came from Sri Lanka, and the star anise from Vietnam. 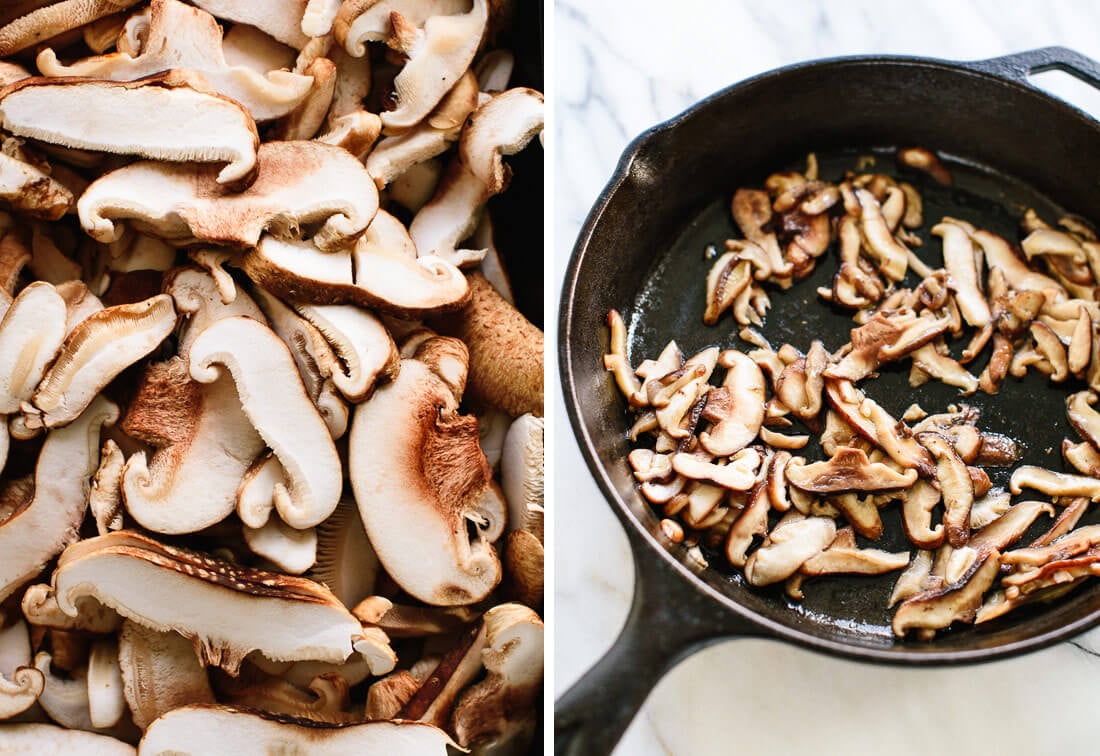 Traditionally, pho is made with strips of beef, and the broth is flavored with fish sauce. To make mine vegetarian, I substituted shiitake mushrooms for the beef and used tamari (or soy sauce) instead of the fish sauce.

I tried a vegetarian pho recipe a couple of years ago that was essentially fat-free due to the use of vegetable broth and the absence of meat. As a result, it was lacking in body and depth of flavor. For this version, I intentionally sautéed the mushrooms in some oil to enhance their flavor and texture, and to add extra depth to the soup. Success!

Also of note, I used a combination of vegetable broth and water to make sure that the delicate notes of cinnamon, star anise, clove and ginger shine through. So, that’s why you might want to add some salt back in along the cooking process. (For the photos, I made the mistake of using a very orangey broth, but yours will be more clear in color and flavor.)

For a more intensely flavored broth, char your onions and ginger before adding them to the broth—it’s an extra step that takes 20 minutes but makes this pho taste a little more traditional (see recipe notes for details). 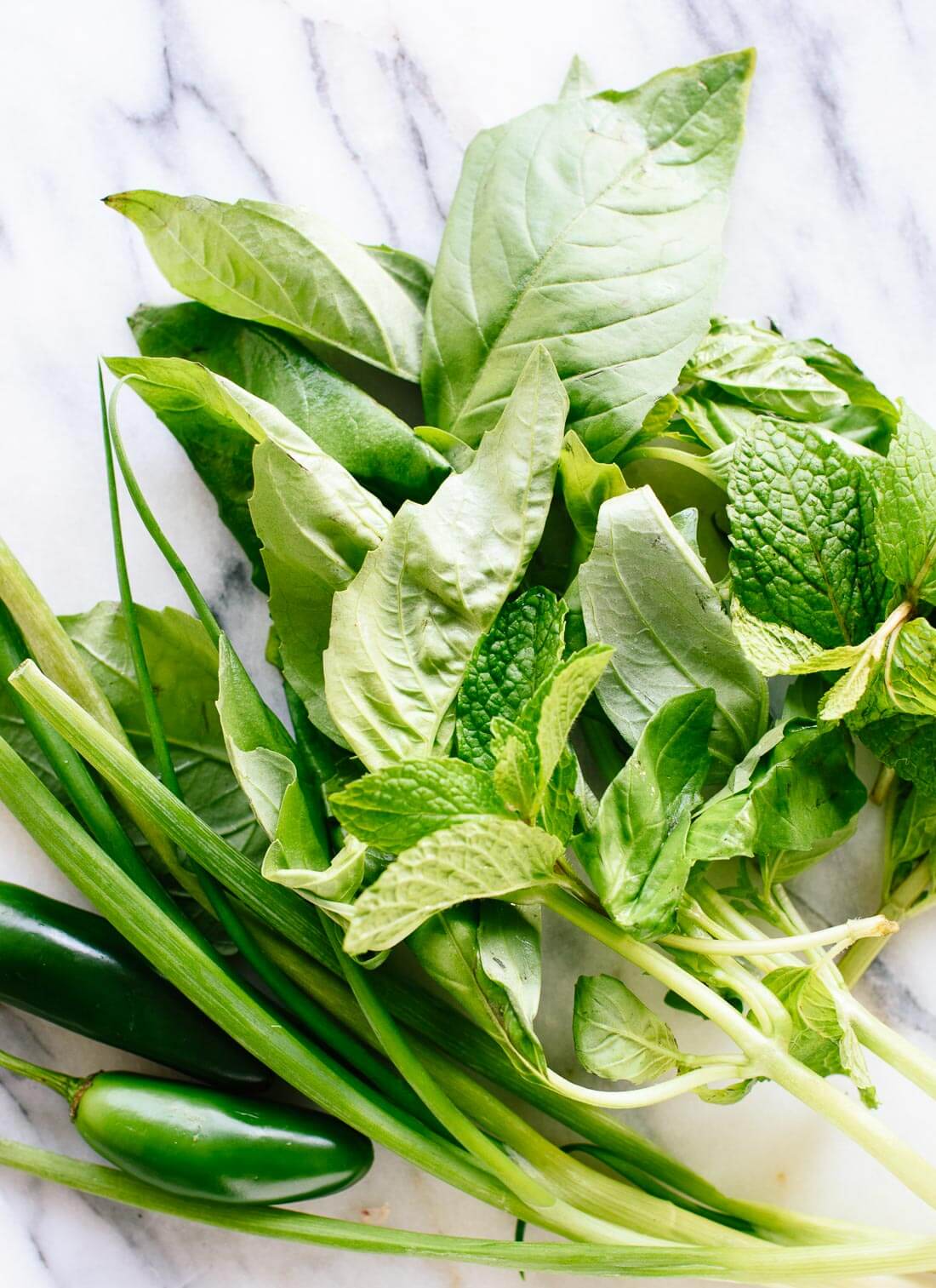 This is a fun, quick and delicious version of your favorite restaurant’s pho, and I hope you love it as much as I do. Please let me know how it turns out in the comments!

Craving more light and healthy soups? Browse all of my vegetarian soups here. 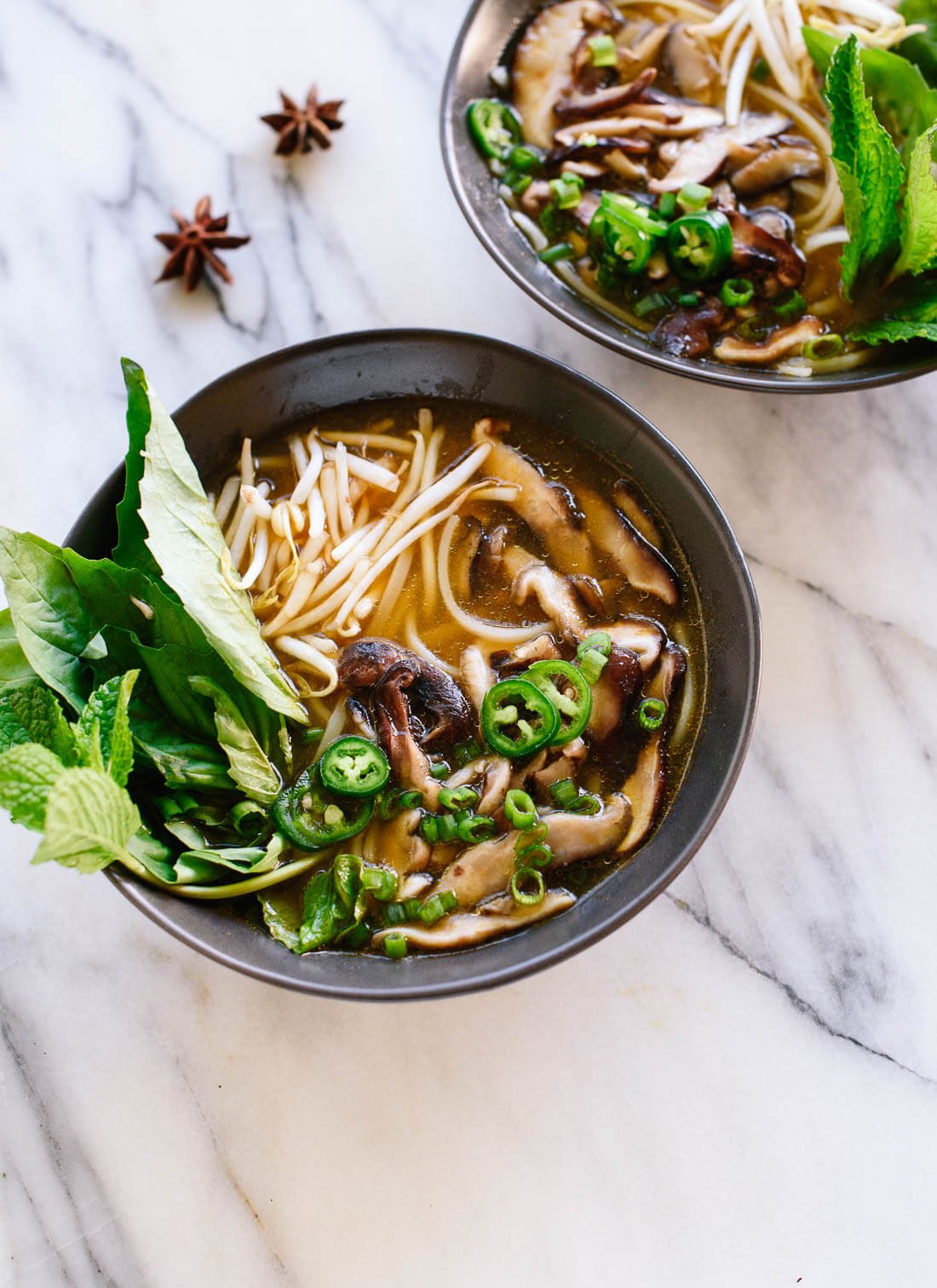 This vegetarian pho (Vietnamese noodle soup) is full of flavor, thanks to spices, herbs and sautéed shiitake mushrooms! It’s easy and fun to make, too. Recipe yields 4 generous bowls of soup.

If you love spicy pho: Sriracha overpowers the delicate flavors in this soup, so I don’t recommend adding any. You can add a pinch of red pepper flakes to the broth as it cooks, and/or add extra sliced jalapeño to your bowls.
Make it gluten free: Be sure to use gluten-free tamari or soy sauce (tamari is usually gluten-free, but check your bottle to be sure).
*For even more flavor: Char your onions and ginger before adding them to the pot. If you go this route, just slice the onion in half (instead of quarters), and don’t peel the ginger. You have a few options on how to char them—you can supposedly char them with metal tongs over a gas flame (I don’t have gas, so I couldn’t try this), or broil them, cut sides down, on a baking sheet, or—the most reliable method—roast them, cut sides down, on a baking sheet, on the upper rack in a 500 degree Fahrenheit oven for 15 to 20 minutes.
Mushroom alternatives: You can just omit the mushrooms altogether (I’d actually stir a couple teaspoons of oil into the broth, for body). Untraditional alternatives include crispy tofu or steamed edamame.

This post was created in partnership with Frontier Co-op and I received compensation for my participation. Opinions are my own, always. Thank you for supporting the sponsors who support C+K!