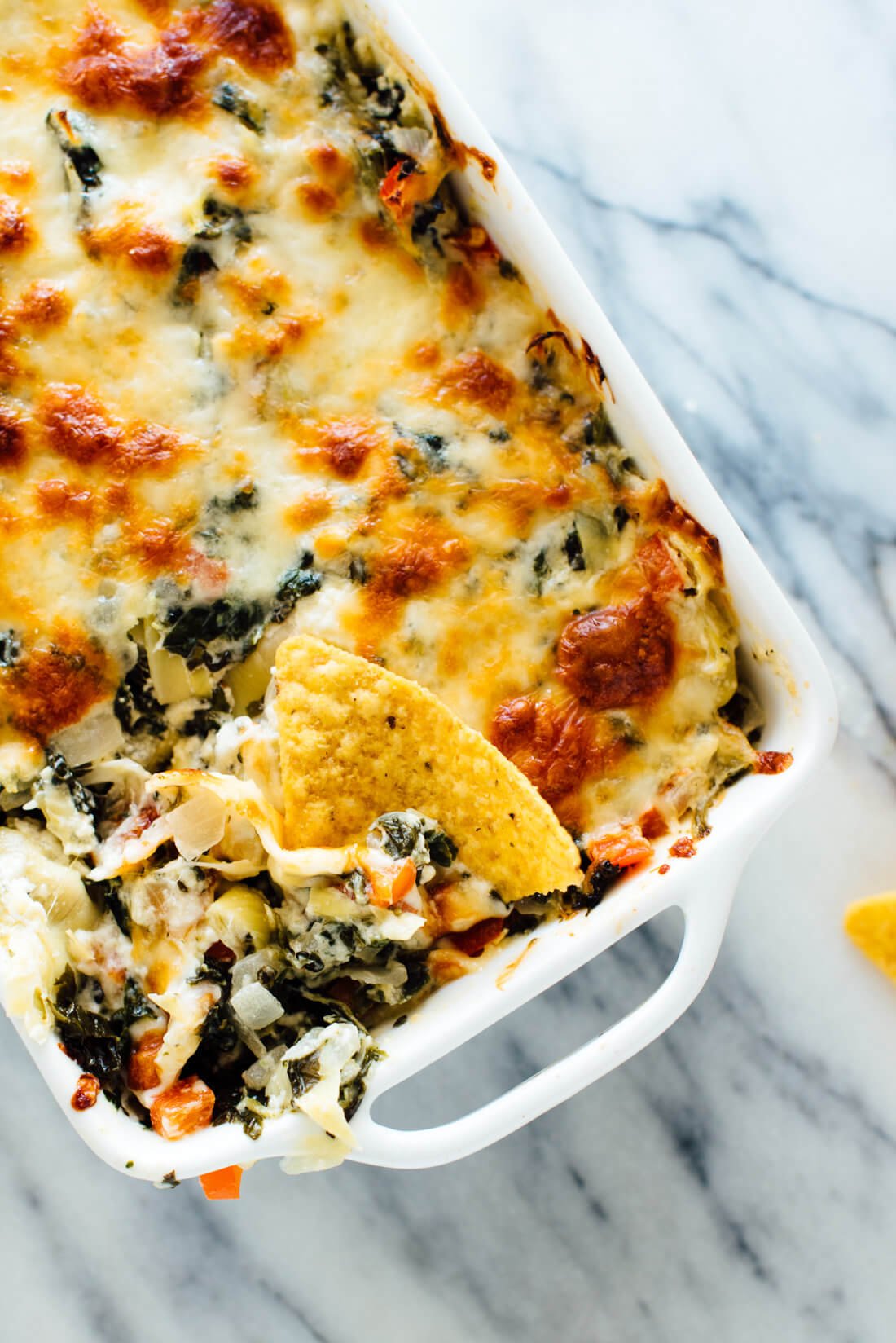 What good is a vegetarian recipe blog without a proper spinach artichoke dip, baked until golden and bubbly? Not very good. Also, I’m making myself hungry. 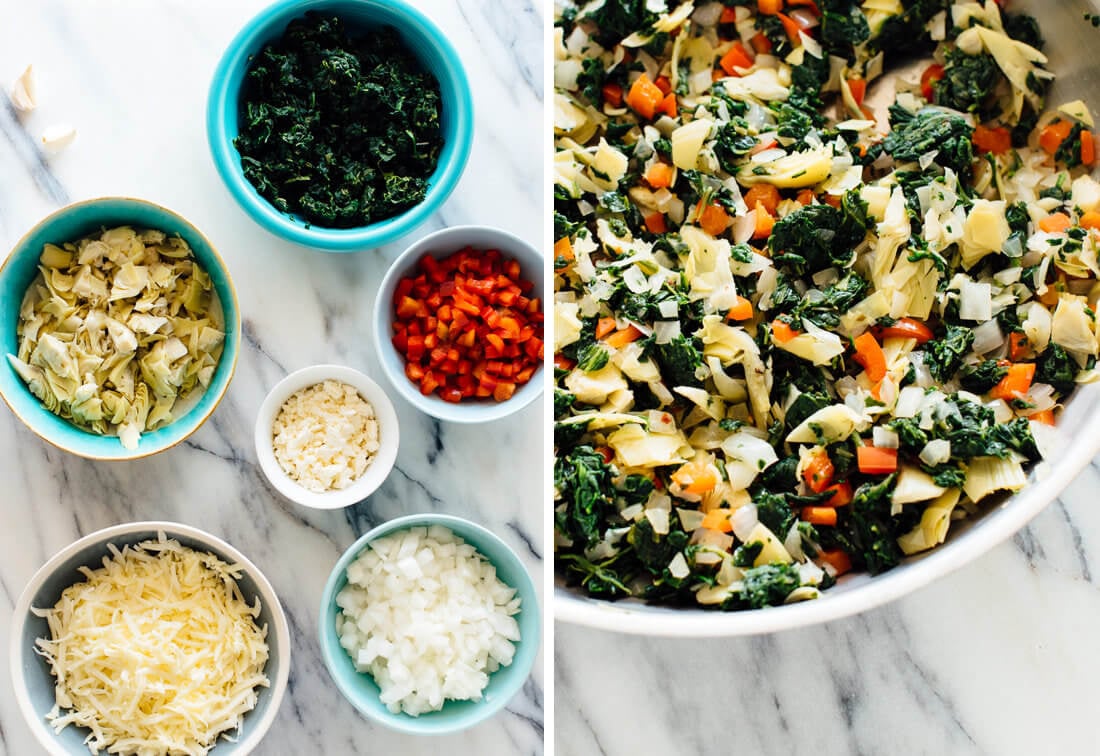 The standard ingredients for spinach artichoke dip are pretty basic—beyond spinach and artichoke, you’ll find some creamy and cheesy components.

My favorite spinach artichoke dip in Kansas City is absolutely loaded with spinach and artichoke, so I didn’t add as much of the creamy stuff as some other recipes do. 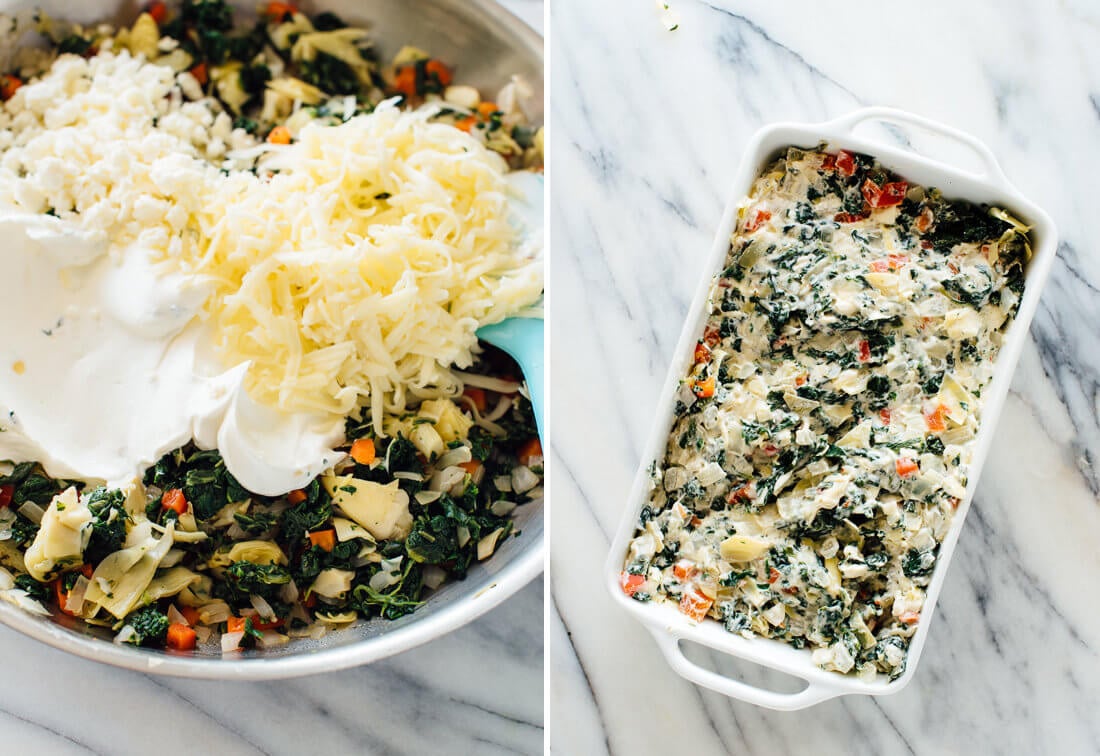 I experimented by trying sour cream, cream cheese and mayonnaise in various quantities, but I couldn’t detect a significant difference in the outcomes. So, I decided on sour cream (Greek yogurt should work, too) because it’s the lightest option of the bunch. No mayo here!

For the cheesy component, I opted for mostly mozzarella, which turns magnificently golden in the oven. I also added some feta cheese, which adds another layer of flavor to the dip and lends a Mediterranean vibe. To further amp up the flavor and lighten up the dip, I sautéed onion and red bell pepper before stirring in the remaining ingredients.

I also tried using fresh spinach instead of frozen, but was happily surprised to find that frozen spinach produced a more intensely flavored dip. Frozen also saves you a few bucks at the store, and saves you a step since it’s pre-chopped. Buy organic frozen spinach, if it’s available, since leafy greens (spinach especially) are often high in pesticide residues.

In summary, this cheesy baked spinach artichoke dip recipe is lighter, and dare I say more healthy than most. That is, if you’re determined to eat spinach artichoke up in the first place. (You have my full support.) 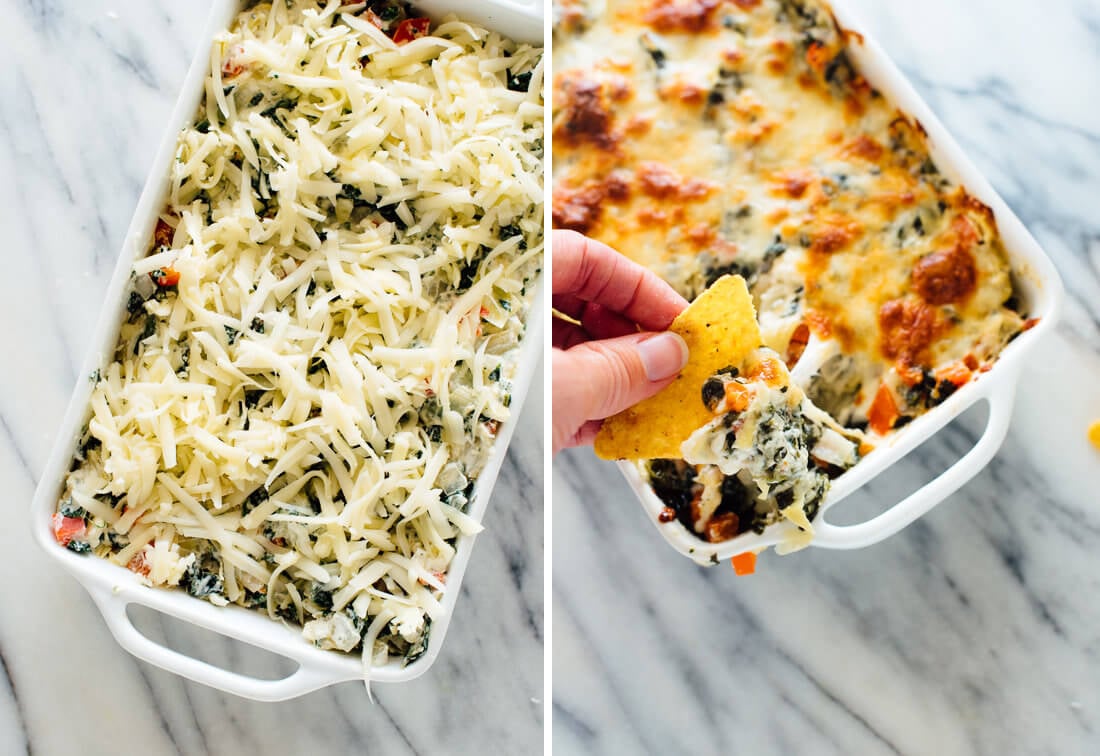 Please let me know how this recipe turns out for you in the comments! I hope it’s a big hit. 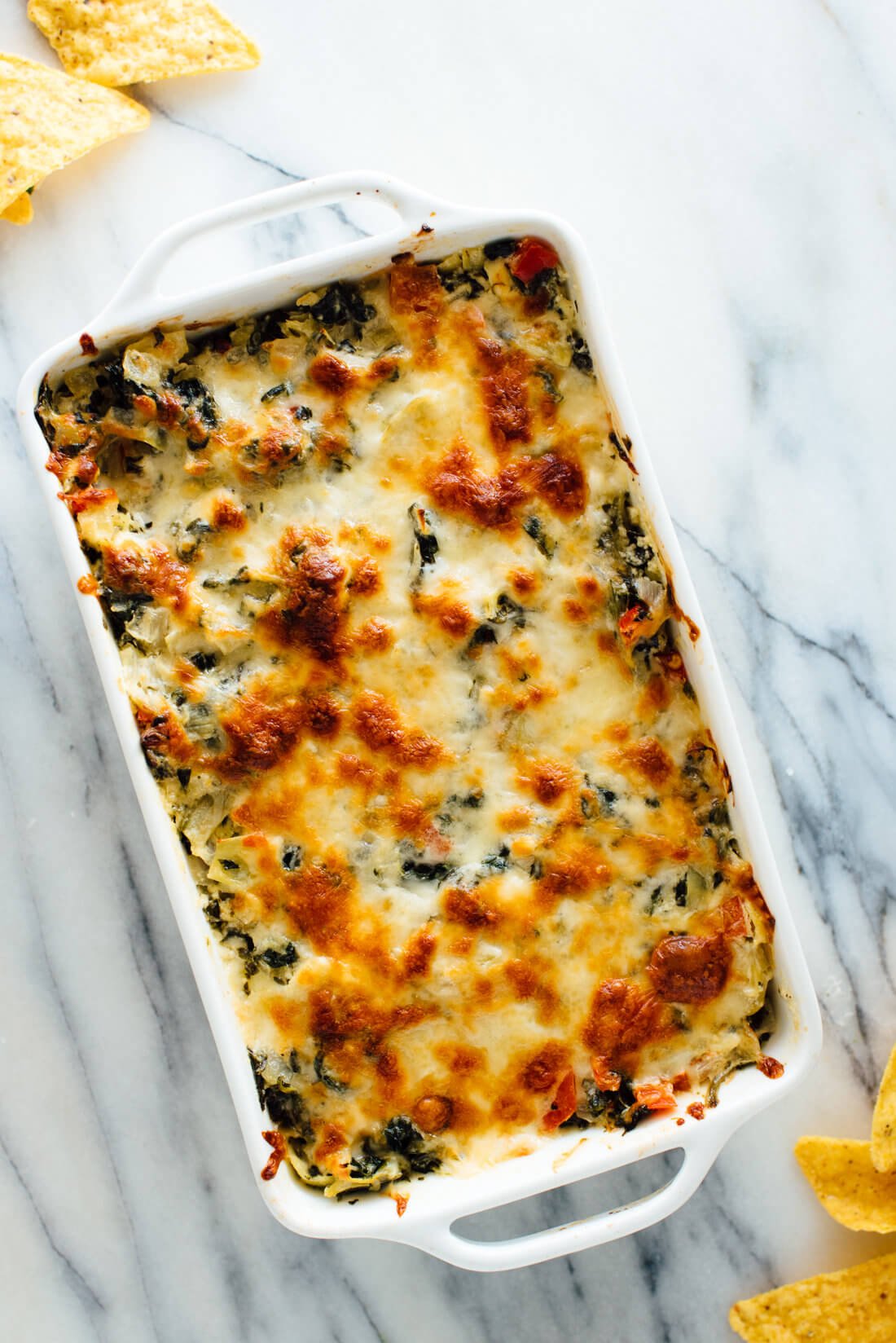 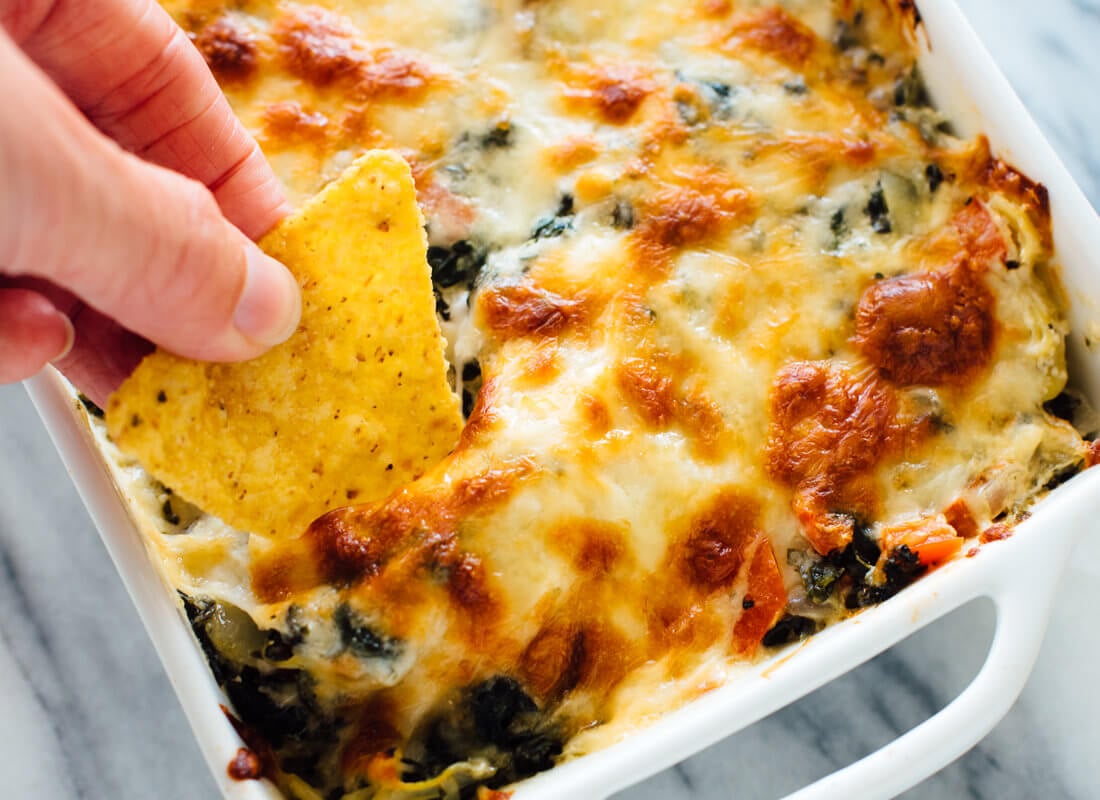 The best cheesy baked spinach artichoke dip recipe, lightened up with extra veggies and no mayonnaise! Everyone will love this delicious appetizer recipe; it’s great served hot or even at room temperature. Recipe yields 8 appetizer servings.

How to thaw frozen spinach: This is easiest in the microwave. Place the frozen spinach in a microwave-safe bowl and cook until it has defrosted, stirring occasionally, about 3 to 5 minutes. You could probably also let it thaw overnight in the refrigerator.

Dairy free/vegan note: This is not a great candidate to be made dairy free. I recommend that you make the creamy avocado spinach dip in my cookbook instead!