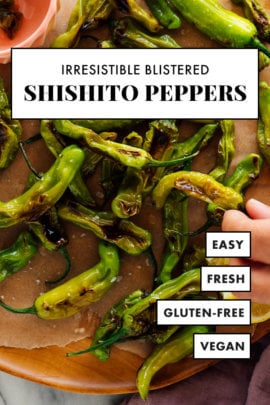 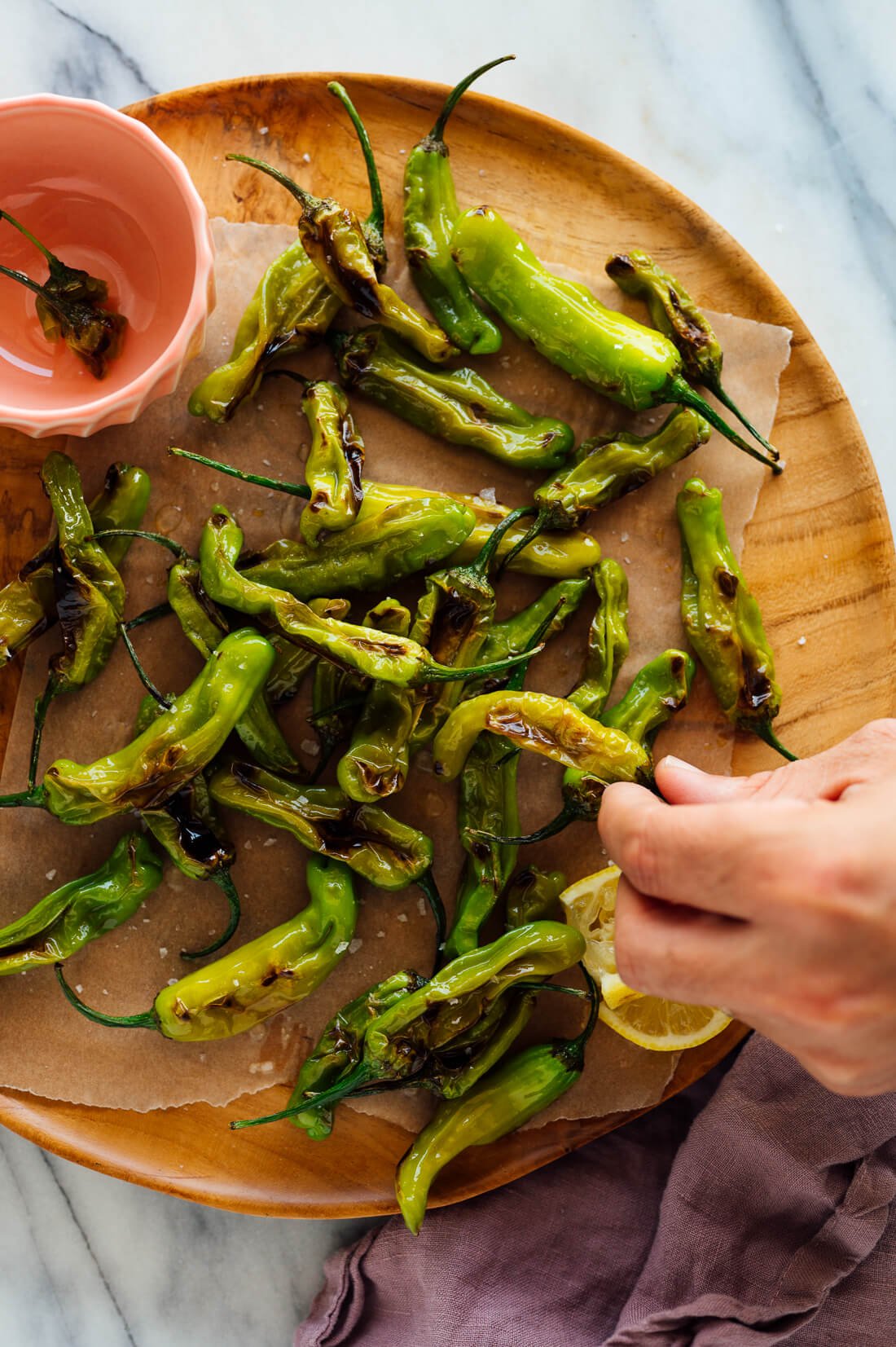 Are you acquainted with shishito peppers? They are thin-skinned little green peppers that you can cook up in a skillet in ten minutes. Once they have a little char on them, they’re so irresistible.

Nine out of ten shishitos are quite mild, but then you’ll come across one that makes your eyes water! That’s part of the fun. 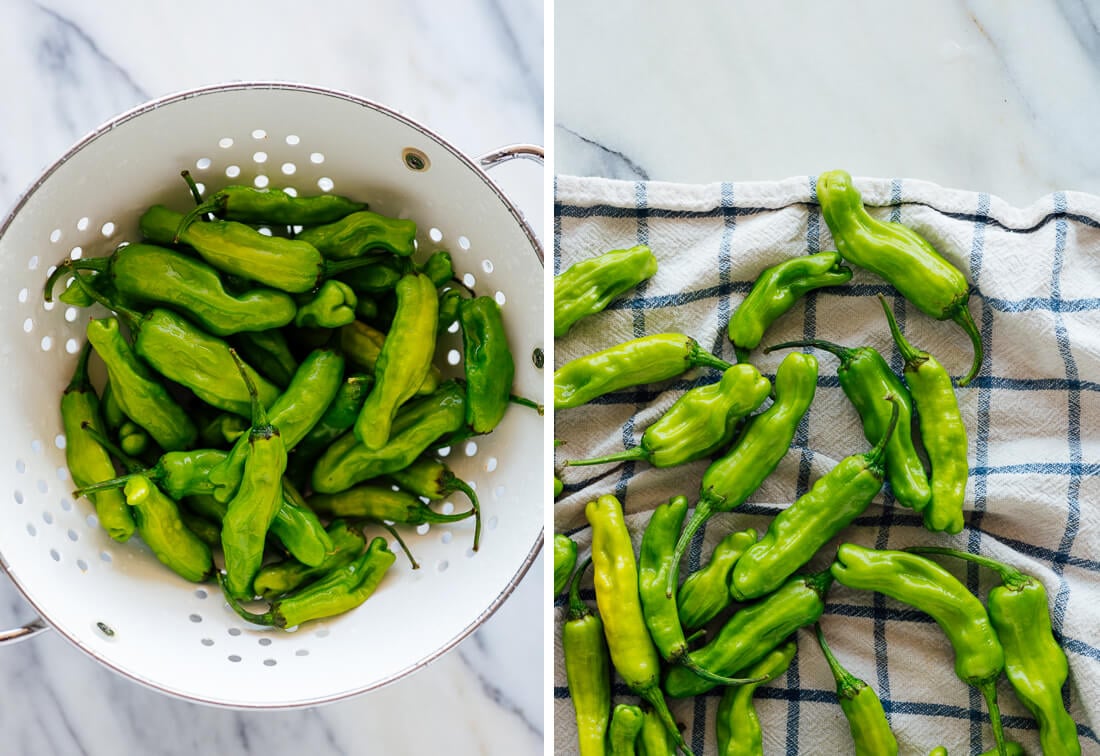 I’ve been craving blistered shishitos since we returned from Spain, where we found the shishito’s cousins cooked the same way. So, I’ve been scooping them up at Whole Foods, and tossing them in a skillet at home.

It took me a few tries to get my technique down. Most recipes will tell you to cook the peppers over high heat, but that will fill your kitchen with smoke. I’ve dialed down the heat and figured out how to make consistently great blistered shishitos. Ready for the easiest appetizer recipe ever? 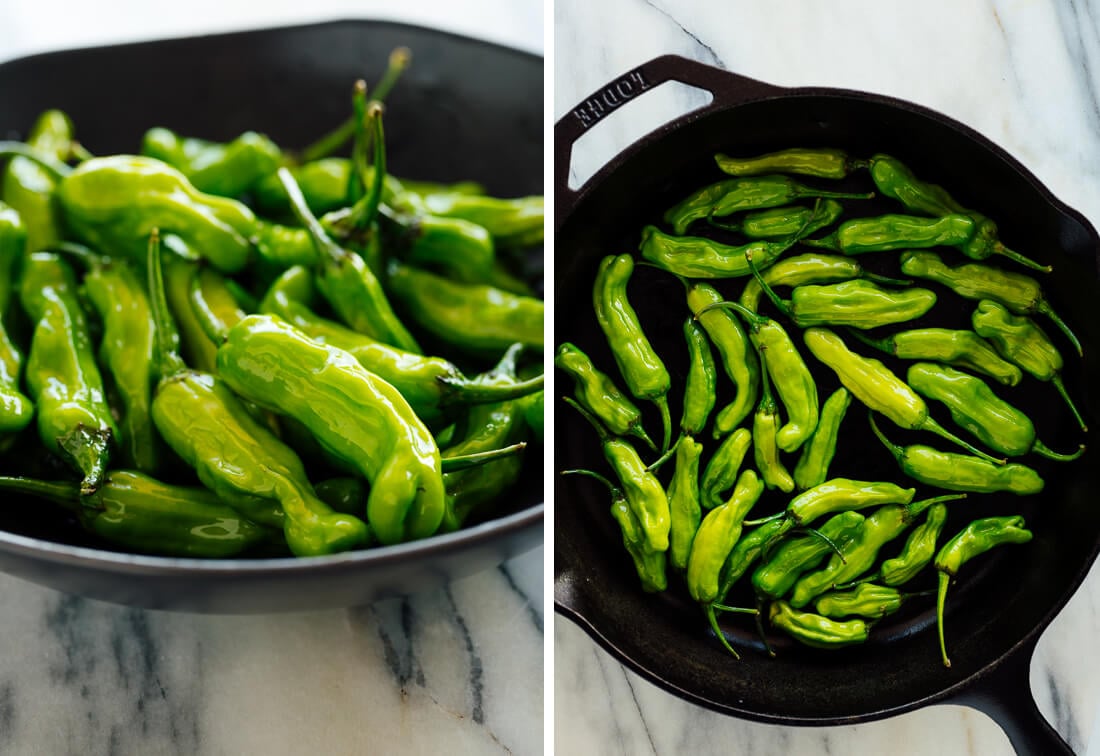 How to Cook Shishito Peppers

Blistered shishito peppers are so easy to cook that you’ll know this recipe by heart after your first try. I offer exact amounts of peppers and oil below, but you really just need enough peppers to cover the base of your skillet and enough oil to lightly coat the peppers.

Here are a few tips:

That’s it! Transfer them all to a serving dish, and finish them off with a spritz of lemon juice and a generous sprinkle of salt. I’ve tried other flavorings, but shishitos are really best when they’re simply dressed.

Watch How to Cook Shishitos 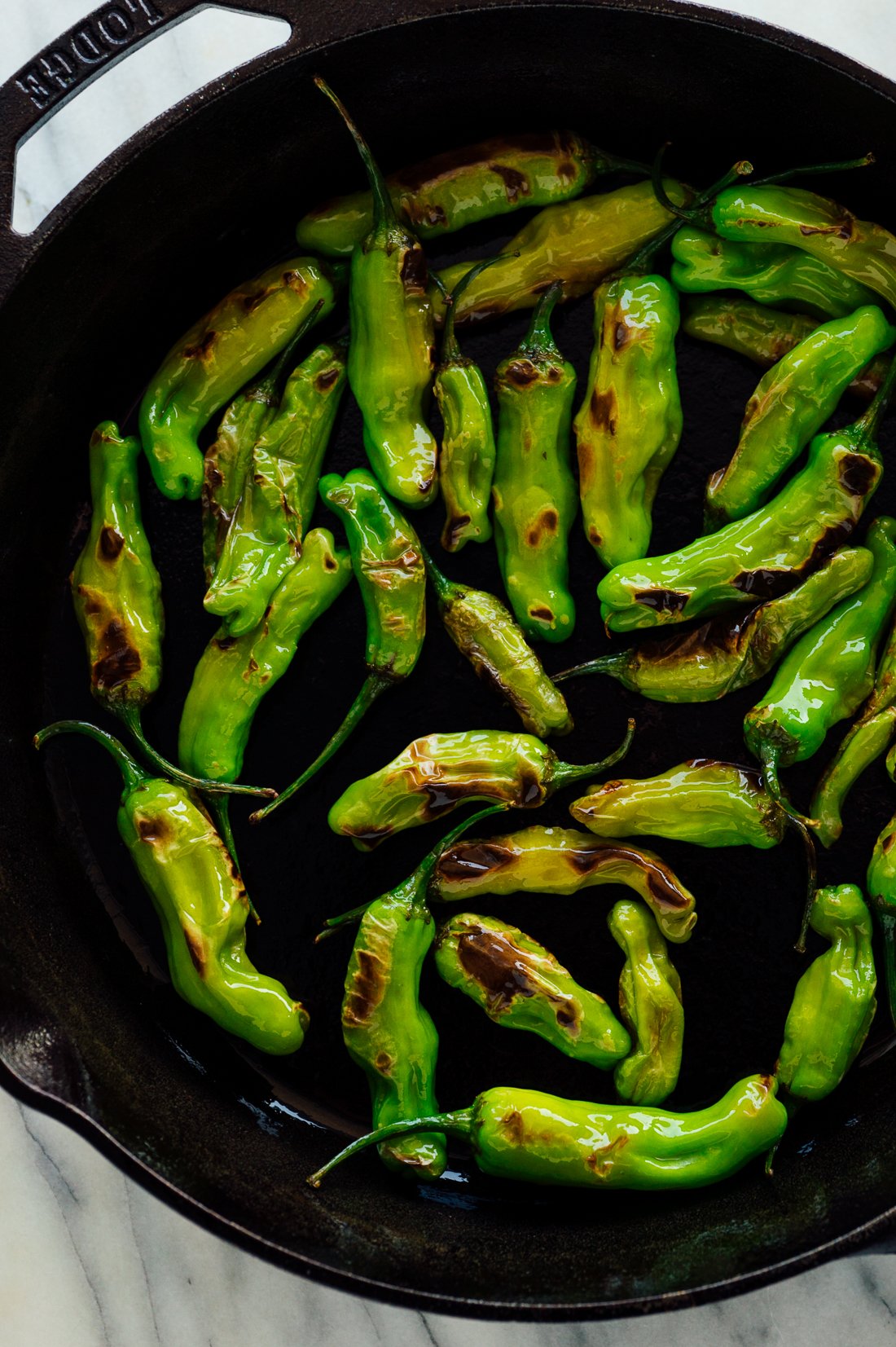 Meet shishito’s cousins, which you can cook up the same way. Shishitos are easier to find in the States, so that’s why they’re featured in the title of this post.

Shishito peppers hale from East Asia, and I’ve ordered them as an appetizer from sushi menus. They are small green peppers that look like wrinkled, thin-skinned jalapeños. Don’t worry, they aren’t nearly as spicy (well, 90 percent are not).

Where to buy shishito peppers: You can generally find shishitos for sale at Whole Foods, by the jalapeños, and Trader Joe’s, packaged in the refrigerated produce section.

We found Padrón peppers in Barcelona when we visited Ali and Barclay. Padróns are a little thicker than shishitos, but very closely related. Apparently you’re more likely to come across a spicy Padrón (one in five, vs. one in ten).

We found guindilla peppers in San Sebastián in Northern Spain. They’re skinnier than shishitos, and my favorite variety. You’ll also find them pickled in vinegar, and they taste like spicy, firm pepperoncini peppers.

The first time we ordered blistered guindillas, my husband assumed we couldn’t possibly finish off the full bowl and offered them to our neighbors for a taste. I admired his generosity while I reached for another, and another, and before you knew it, I polished them off myself.

Guindillas are a Basque specialty, and I’ve never seen them elsewhere. I love them so much I’ve found seeds to plant next year. 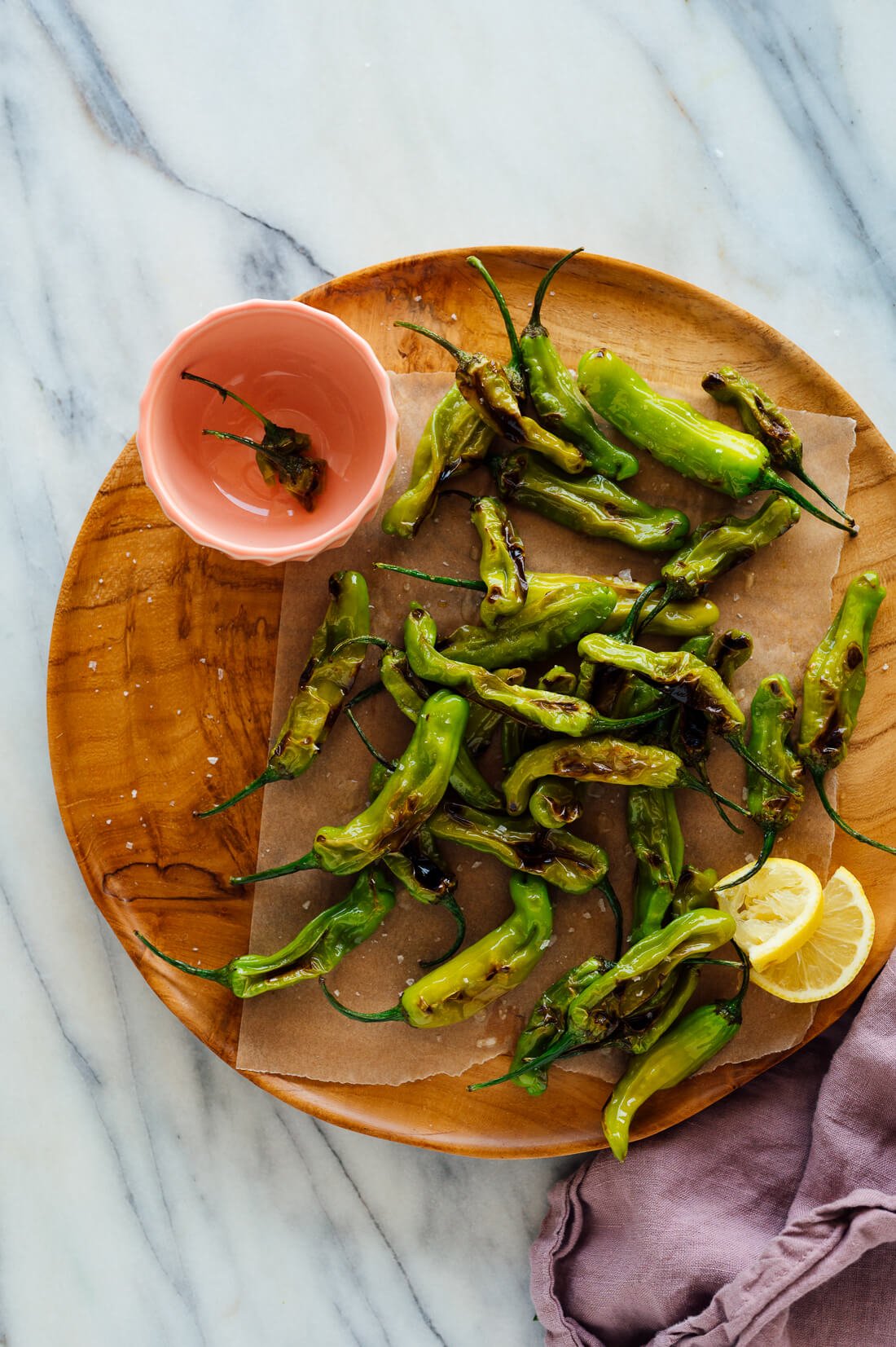 What to Serve with Shishito Peppers

Shishitos are a light and healthy snack on their own. They would be welcome with almost any meal, and they’re an easy way to round out an appetizer spread of cheese and olives.

If you want to take a cue from Spanish tapas, serve them with any of the following Mediterranean appetizers:

Please let me know how your peppers turn out in the comments! They really are so fun to make and eat. 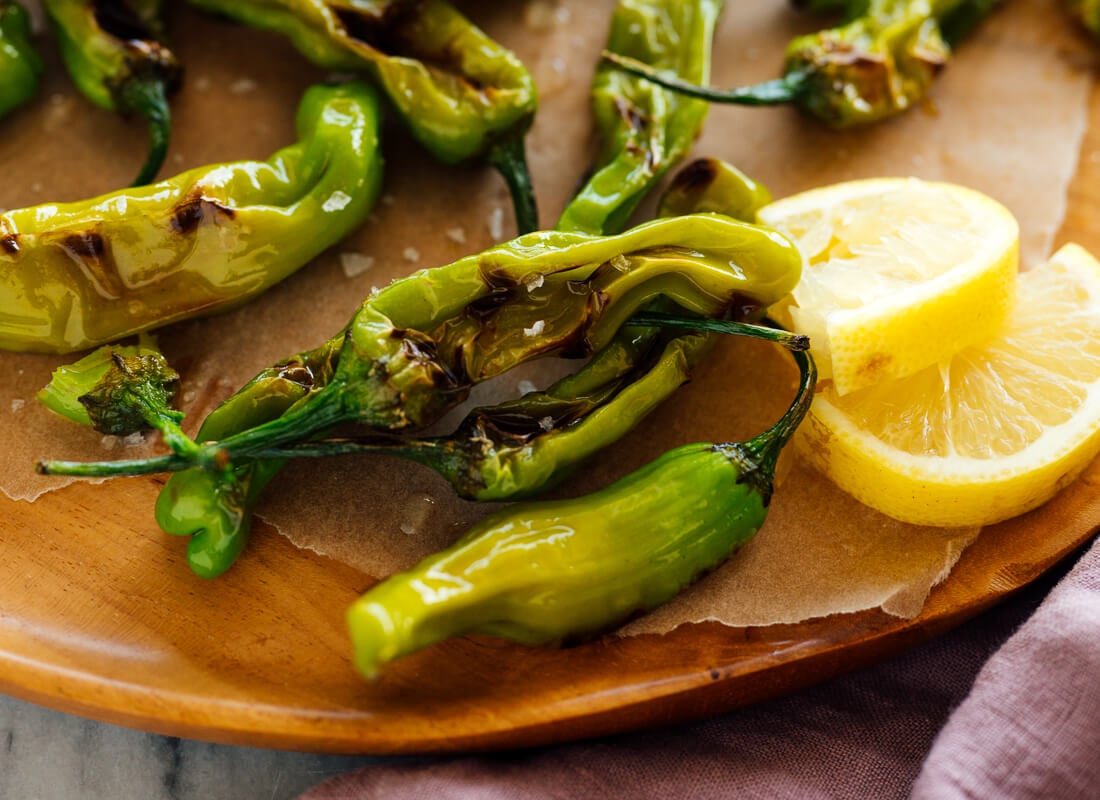 Blistered shishitos are easy to make and totally irresistible! You’ll just need shishitos, olive oil, a skillet, and this simple recipe. Recipe yields 4 appetizer servings; you can double the recipe in a large skillet.

Pepper options: This recipe will also work with Padrón peppers and guindilla peppers.