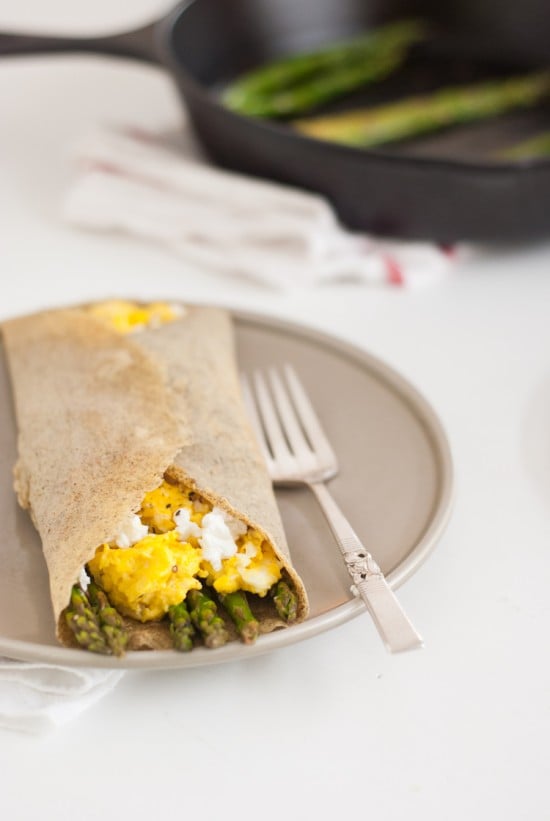 My first experience with crêpes was in high school. I took French back then, and joined the French Club for something to add to my college application. I even became the secretary of the French Club, meaning that I did, basically, rien. Nothing. It was the perfect role for my nerdy, lazy, 17-year-old self. Anyway, we had an annual French Club party, and Madame Gordy would bring in her crêpe maker so we could all enjoy sweet crêpes together. 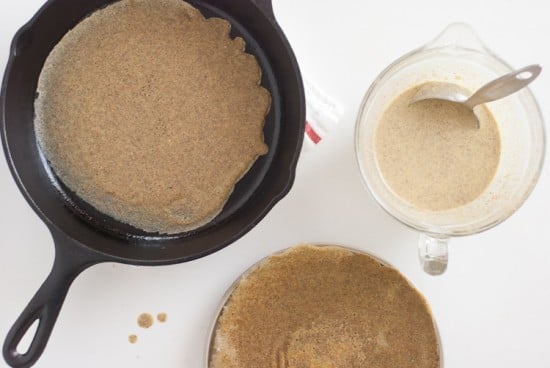 A few years later, I spent a semester in Bordeaux, France. We visited Paris often, and we liked to stop at street vendors and order crêpes for a treat. I always admired the elegant swoop, swoop movement of the vendor’s hand as she spread the batter around the surface of the crêpe maker. She (or he) would hand us our crêpes, filled with Nutella and folded into quarters so they were easy to hold. I distinctly remember this day, when I was meandering through the Latin Quarter by myself. I sat on the edge of that fountain with a crêpe and watched families and tourists go by, and admired the old streets, the bookstores and the bridges across the Seine. 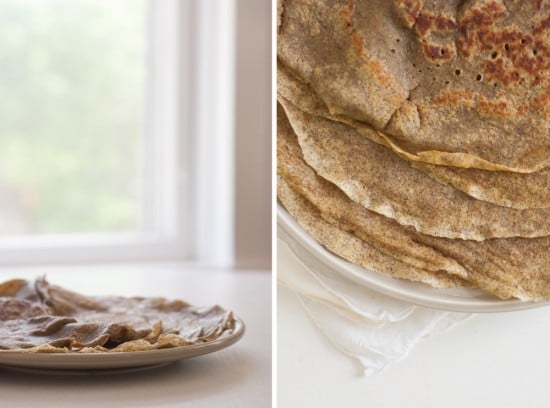 When I was in Kansas City last month, my friend Jordan decided to make crepes for breakfast. She reminded me that crepes do not, in fact, require a crepe maker. They’re also much easier to whip together and cook more quickly than one might think. She filled ours with scrambled eggs, goat cheese and cherry tomatoes. So good.

So I’d been meaning to cook crepes, and I also wanted to try the rhubarb sauce for this week’s Food Matters Project recipe. With my brother’s birthday and Easter last weekend, I hadn’t gotten a chance to try it. Tuesday rolls around and I decide to go for it, and what would I decide to go with it? Crepes. The buckwheat crepes I had bookmarked in King Arthur Flour Whole Grain Baking. 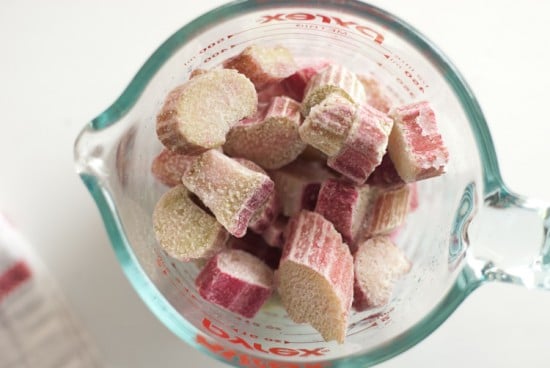 Unfortunately, nothing worked as planned. Thanks to last summer’s drought, I couldn’t find fresh rhubarb anywhere. My hopes for shooting shockingly bright pink stalks of rhubarb dashed, I finally found frozen rhubarb and decided to give it a go. I didn’t give much consideration to how well tart, sweet-and-sour sauce and nutty whole grain crepes would go together.

Onward. I whizzed the crepe batter together in my food processor and heated up my cast-iron skillet, hoping that it be a sufficiently non-stick surface (I gave away all my non-stick pans last year). My first crepe didn’t cook up right, but it still tasted great, so I shared it with Cookie as I cooked up the rest of the crepes. Fortunately, I got the temperature setting and technique down and the next few crepes were round paper-thin around the edges, just the way I like them. 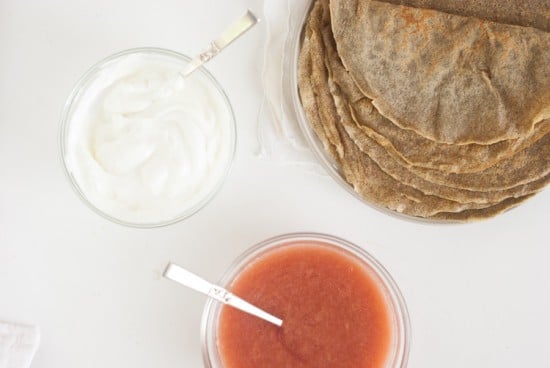 I spread vanilla Greek yogurt over a crepe, folded it into quarters and topped it with rhubarb sauce. Hm. It wasn’t very pretty and it didn’t taste as great with the crepes as I had hoped. The crepes and the sauce were great independently and the combination was 100% edible, but they just weren’t meant to be together. 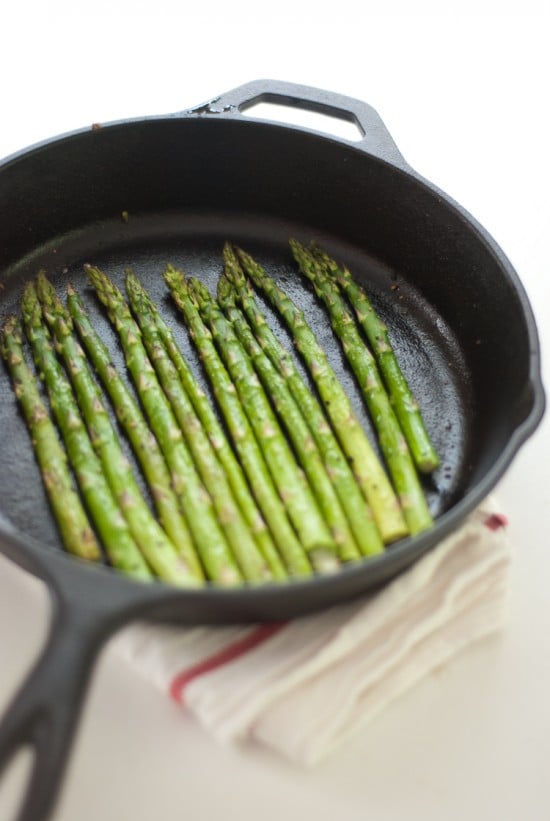 Savory crepes to the rescue! After this asparagus frittata, I knew how well eggs, goat cheese, shallot and asparagus go together. I snapped off the tough ends of a handful of asparagus stalks and tossed them in olive oil with salt and pepper. I baked the asparagus at 450 degrees Fahrenheit, in a cast iron pan, for about 10 minutes, until they were fork tender. I sautéed some shallots, then added scrambled eggs with a dash of milk and folded in crumbled goat cheese at the end. Crepe met asparagus, scrambled eggs landed on top, and voilà, an amazing savory springtime crepe was born. 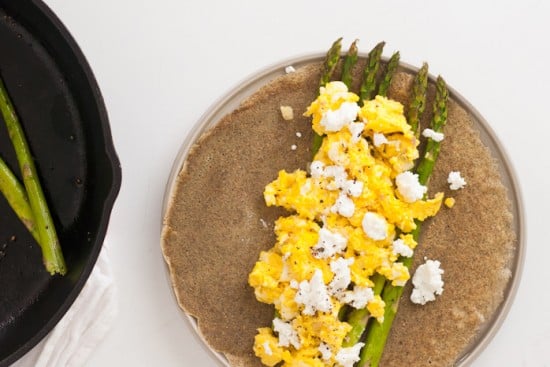 These crepes are easy to whip up in a food processor, blender or by hand, and don’t take long to cook. They have a nice nutty flavor and speckled texture thanks to the buckwheat. Buckwheat crepes are great with savory eggs, nut butters and sweet, fruity fillings. The King Arthur people suggest caramelized apples and whipped cream, which I’ll try to remember for next fall, and I think peaches and cream would be lovely this summer. I don’t think there’s a crepe in the whole world that isn’t great with Nutella. Serve with savory fillings or sweet, for breakfast, dinner or dessert! 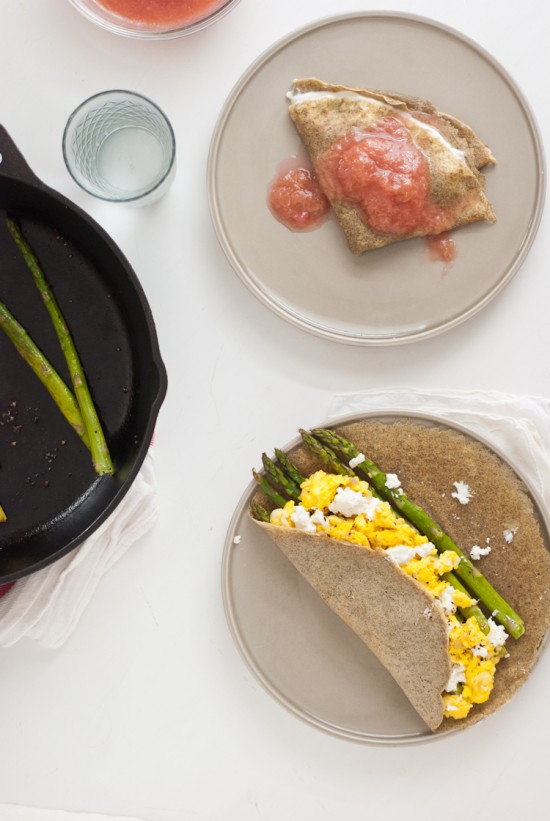 This makes a tart, honey-sweetened rhubarb sauce. You can also trade berries for the rhubarb; a sweet berry sauce would probably go nicely with these crepes. See my blueberry sauce variation here and cranberry sauce here.

You know what this sauce would be great on? Ice cream. Vanilla bean ice cream.