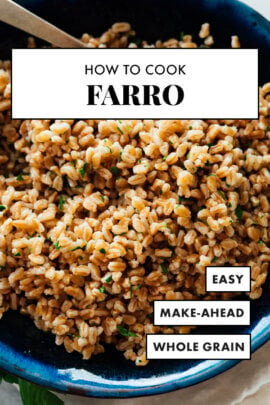 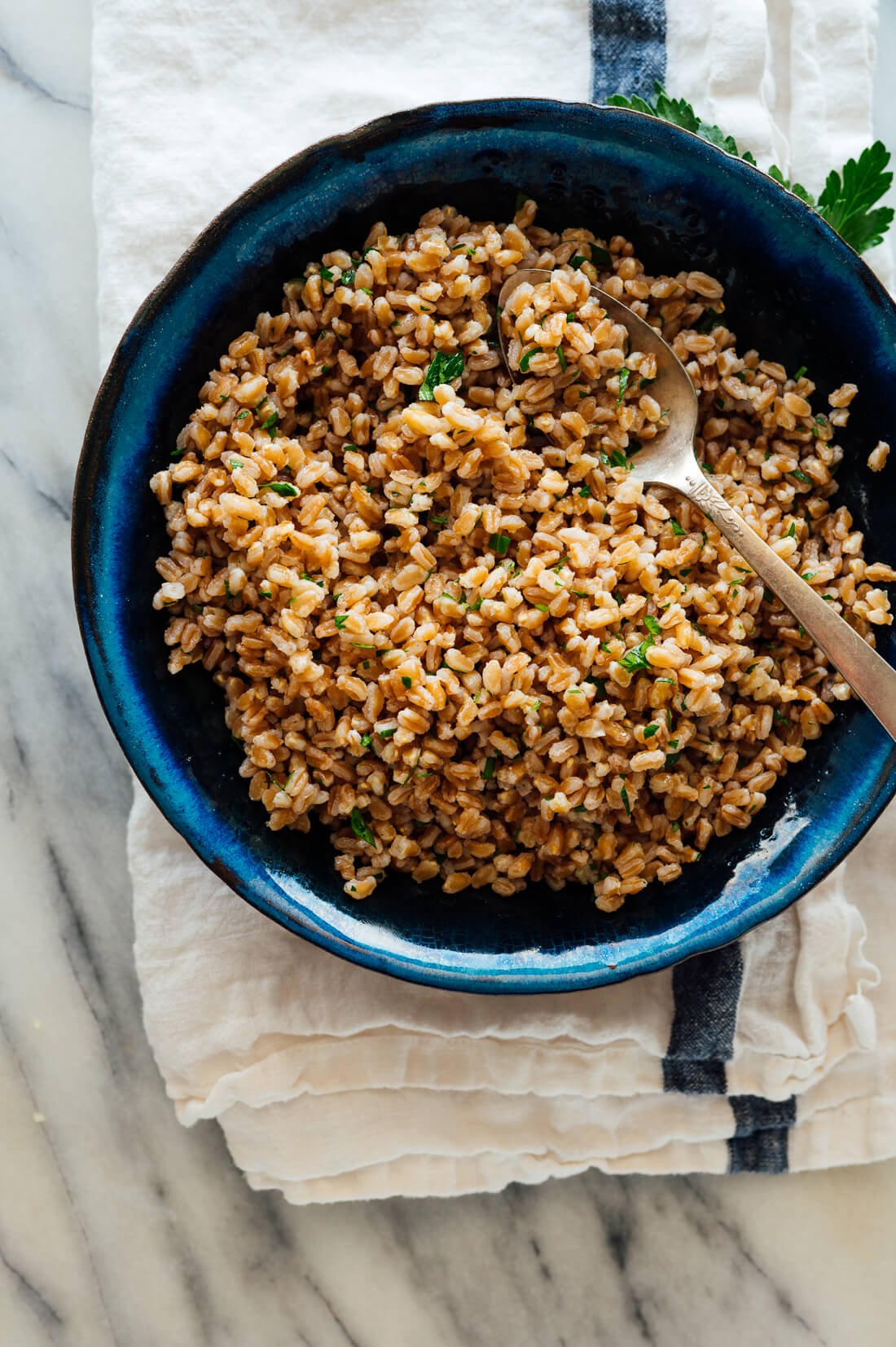 Let’s talk about farro! Have you tried it? Farro is a whole grain that has been cultivated for thousands of years. In fact, it may be the world’s oldest cultivated grain. We’ve even found it in Egyptian tombs.

I love farro for its reasonably quick cooking time, nutty flavor and satisfying chewy texture. Farro is a hearty addition to salads and soups. It’s especially wonderful with some garlic and olive oil stirred in while it’s still warm. 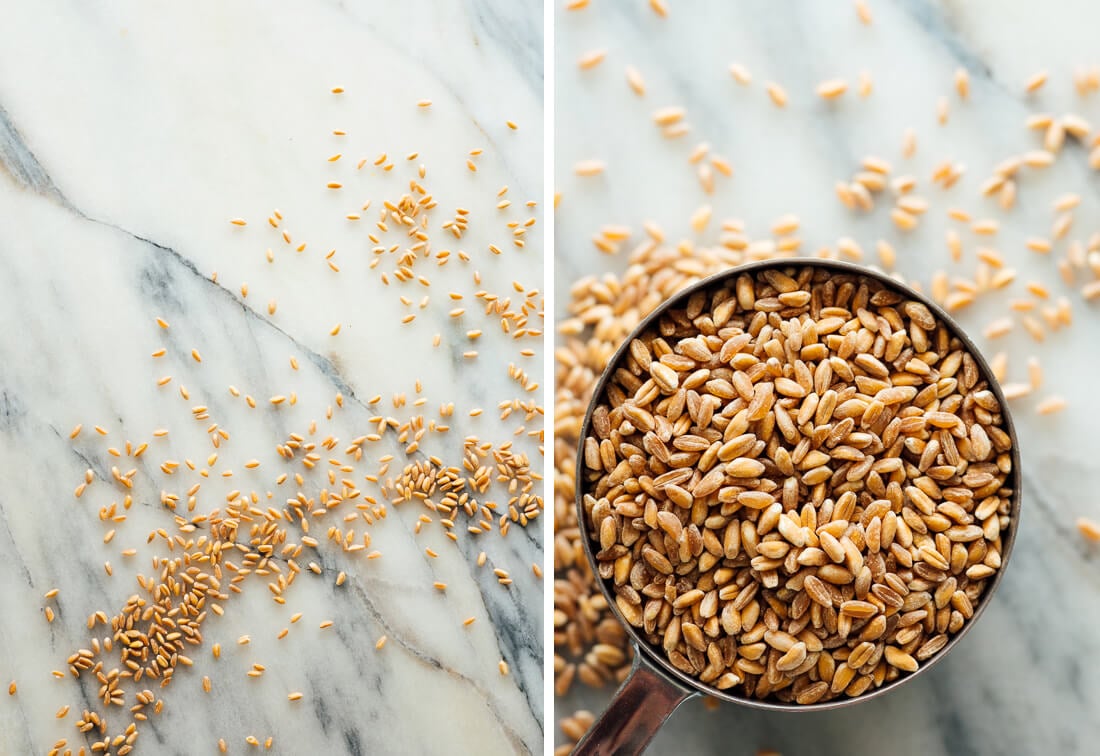 Farro is a nice alternative to wild rice, brown rice, quinoa and other whole grains. It’s a healthy plant-based source of protein, iron and fiber. As a bonus, it freezes and defrosts well. So, you can make a big batch to enjoy over the next few months.

Today, I’m clearing up some common farro misconceptions and sharing my go-to farro cooking method. Keep on reading for more about farro! 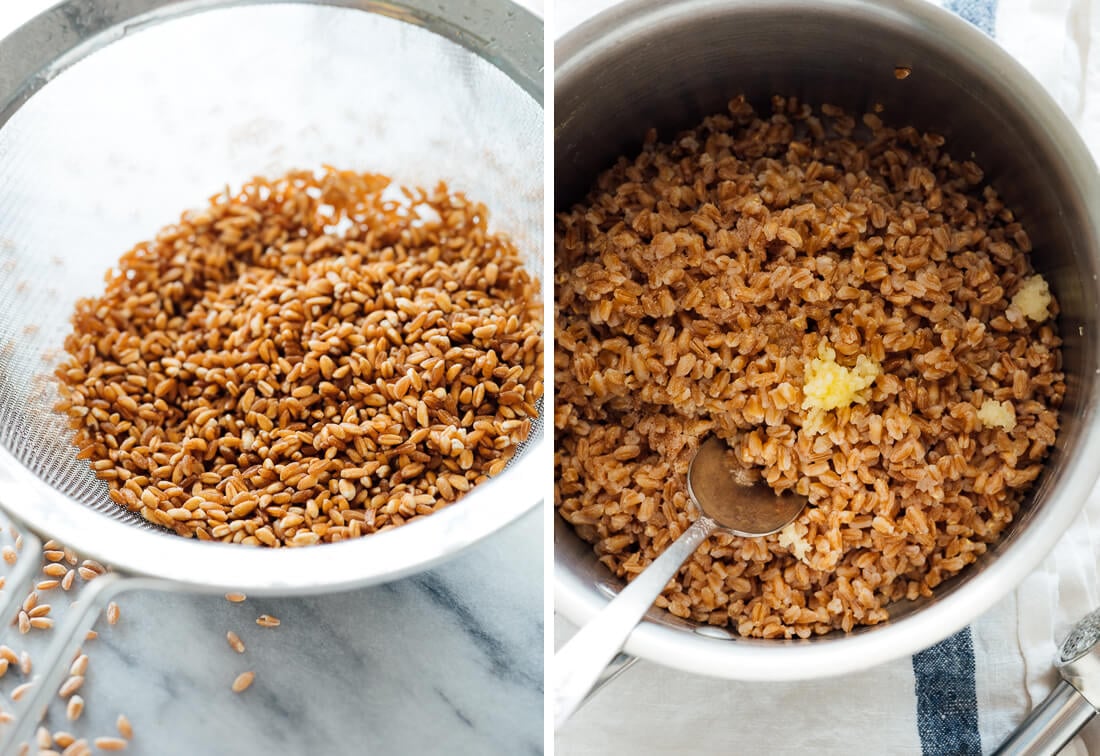 Let’s Clear Up Some Farro Confusion

Farro is pronounced FAHR-oh. It sounds a lot like Egyptian pharaoh, but with more of an “ah” sound in the first syllable. I’m not sure I ever get it quite right.

Farro is not gluten free, so it is not suitable for celiacs. Farro is an ancient strain of wheat. Some people with gluten sensitivities tolerate farro better than conventional wheat, but experiment at your own risk.

Farro can be entirely unprocessed (whole) or processed to varying degrees. True whole grain farro retains all of its nutrients and fiber, but is hard to find and takes longer to cook. Pearled farro has been stripped of its outer layer of bran, so it contains less fiber and nutrients, but cooks a lot faster. Semi-pearled farro is in between the two, so it’s lightly processed and cooks at a medium rate.

Typically, your bag of farro won’t say if it’s pearled, semi-pearled or whole. Frustrating, right? We’re going to cook the farro in an abundance of water until it’s cooked through, so the only variable is the cooking time.

Watch How to Make Farro 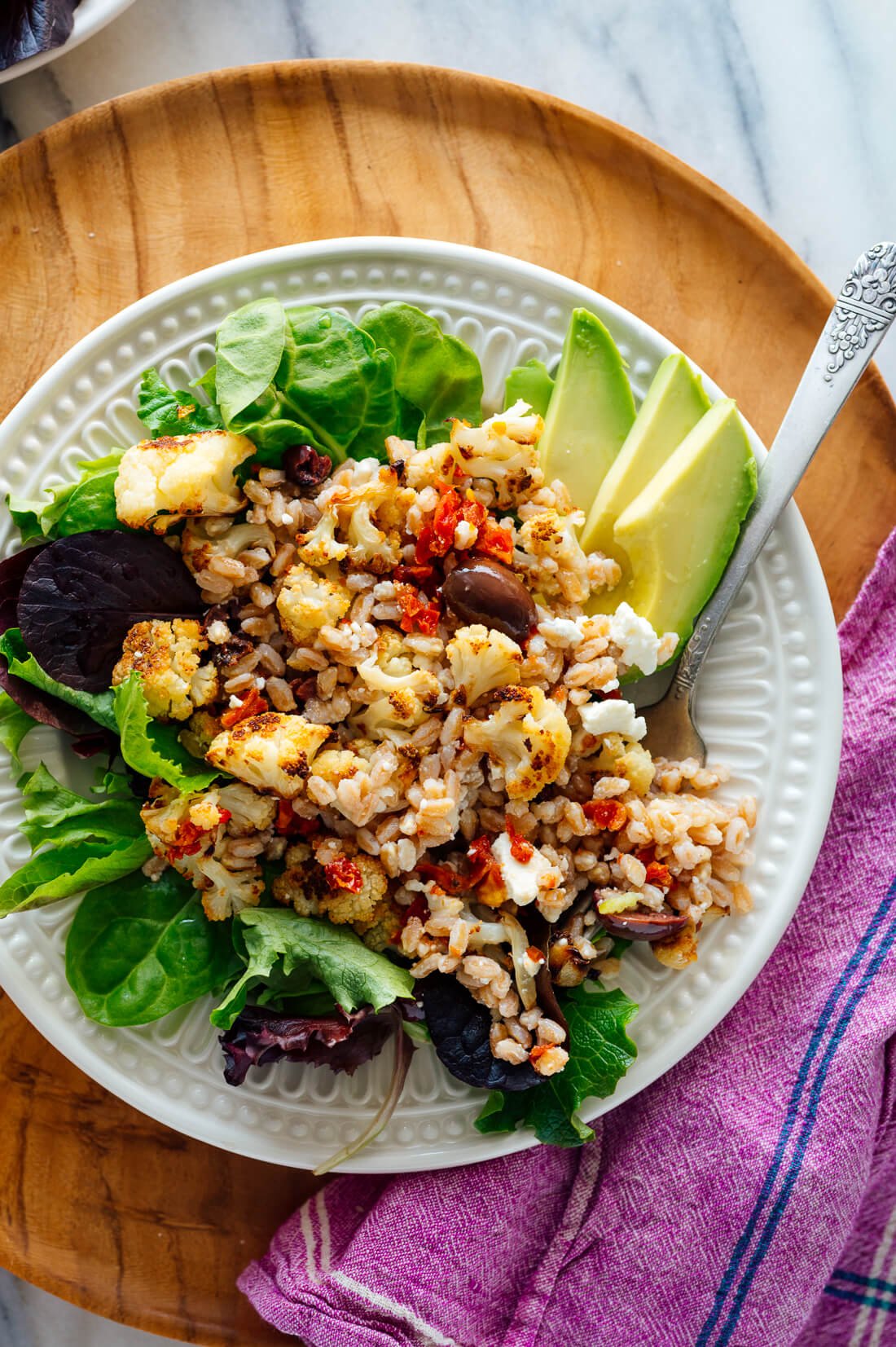 How to Cook Farro

You’ll find the simple recipe below. The key to cooking farro is to cook it in an abundance of water, which prevents it from getting gummy from the starches. The extra water also gives you more leeway with the cooking time (you won’t run out of water by the time the farro is done, even if it takes longer than expected).

Here are a few more notes and tips: 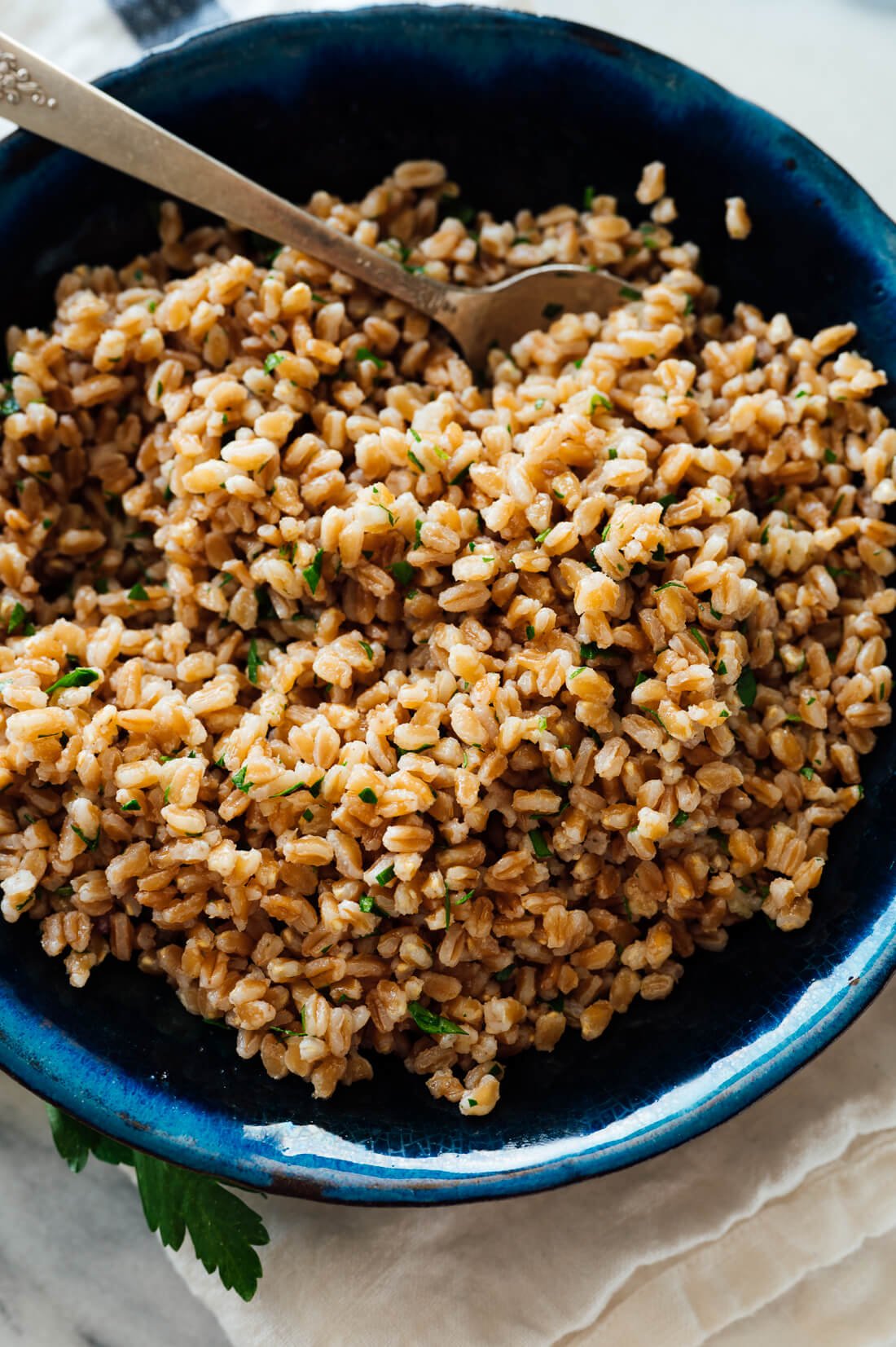 How to Cook Farro

Learn how to cook perfect farro with this simple technique. One part raw farro yields twice as much cooked farro. As written, this recipe yields 2 cups cooked farro. Multiply as needed.

Storage suggestions: Leftover farro will keep well in the refrigerator, covered, for up to 4 days. Or, freeze farro in small portions for up to 6 months. I simply transfer frozen farro to a bowl and microwave until defrosted. Or you can gently drop the frozen farro into a pot of boiling water and cook just until warmed through, then drain well.

Here are just three recipes that feature farro, my favorite chewy whole grain. It is a hearty addition to salads, soups and grain bowls. View all of my farro recipes here. 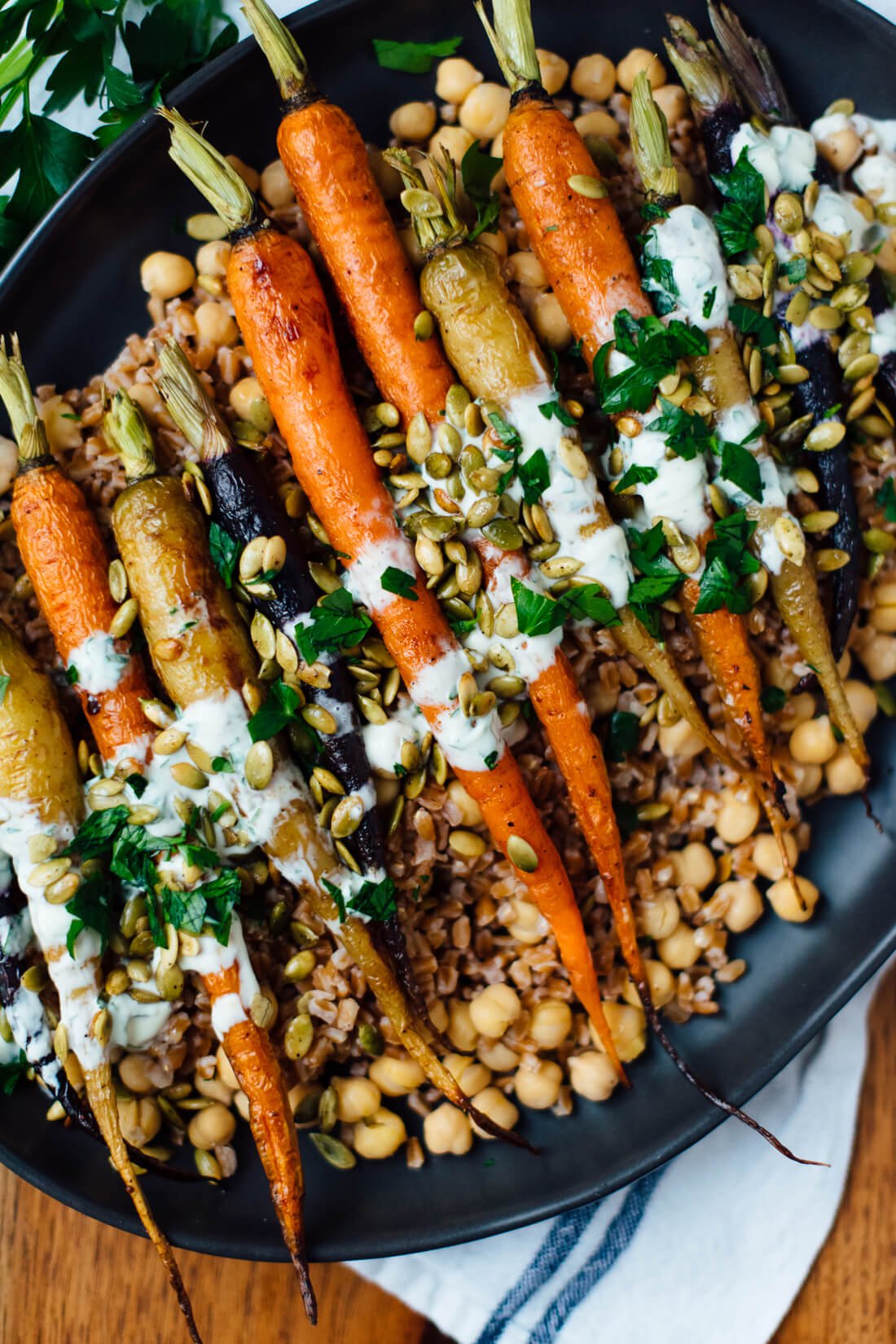 “I made this with Christmas dinner and wow this was certainly my signature dish! It was scrumptious and so pretty. I was so intrigued by it, I had to make it and so glad I did!” – Leslie 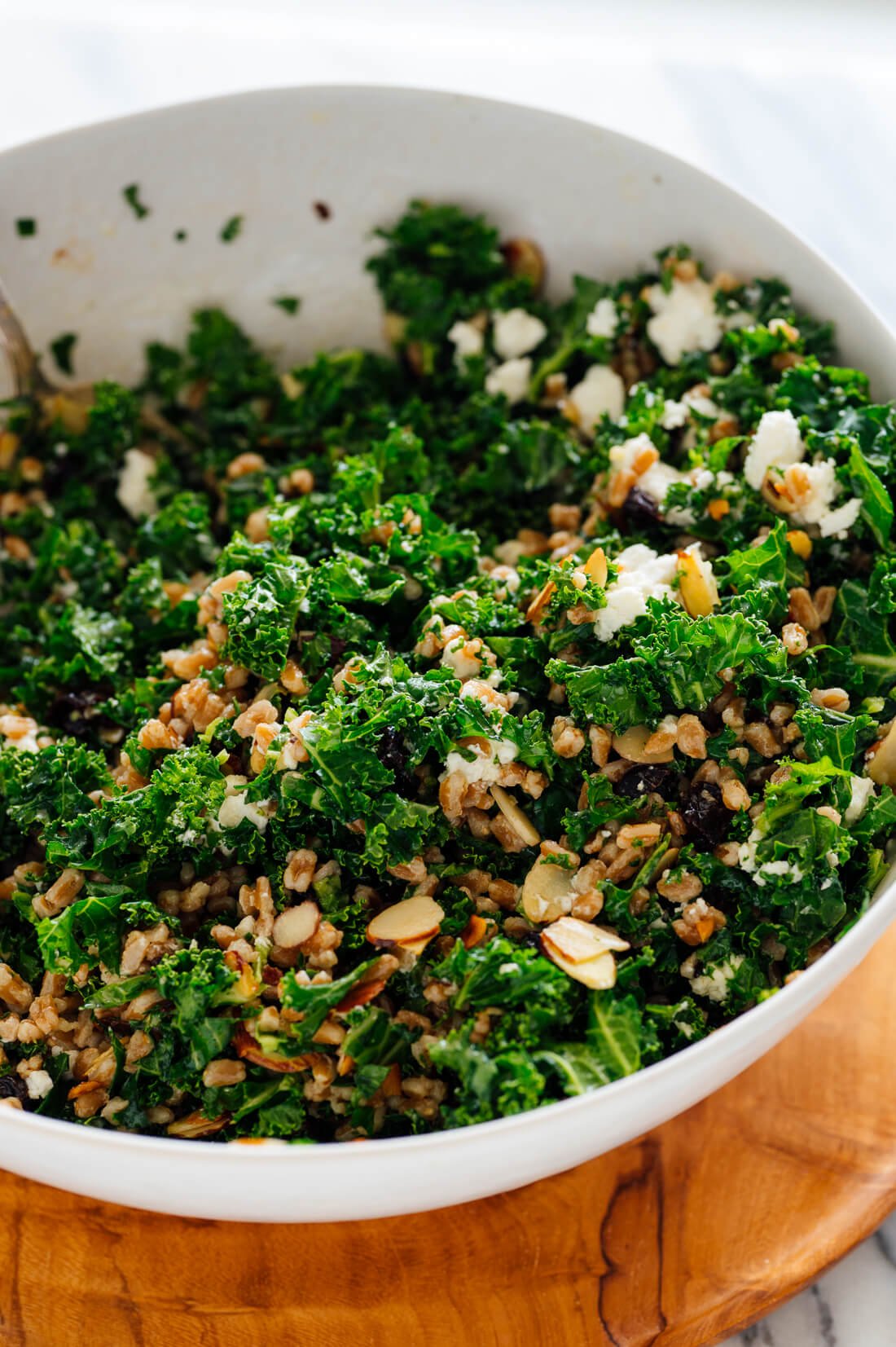 “Made this tonight….quick, easy and SOOO DELICIOUS. Added a couple extra teaspoons of red wine vinegar per your suggestion and that put it over the top. It will be easier to use more of that never ending kale from the garden this summer!! Thank you!” – Cathy 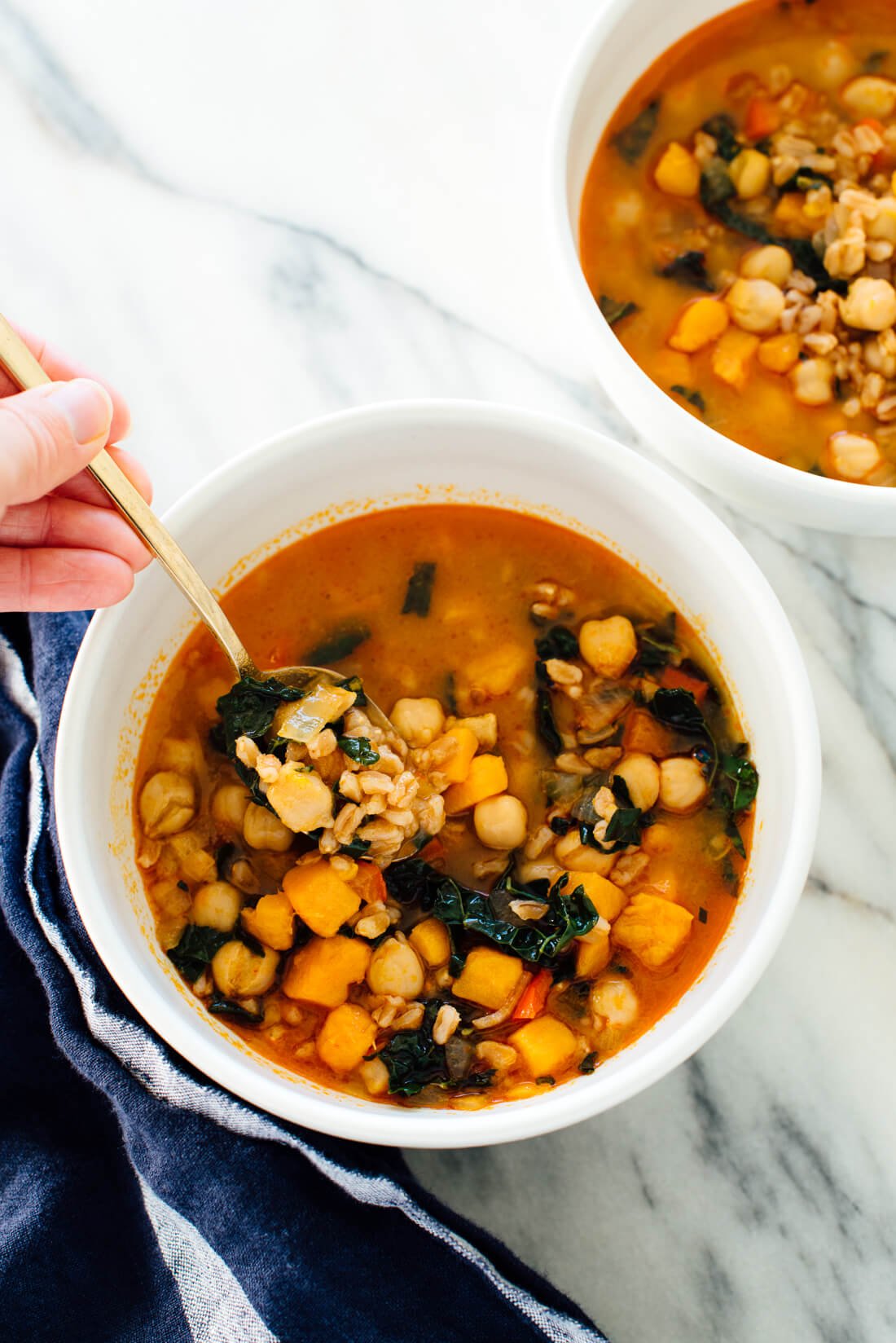 “This soup is delicious! I found your recipe on Friday, made it on Sunday, and am eating it right now and for lunch allll week long. It is sweet, spicy, and hearty. Thanks for sharing the recipe :)” – Christy