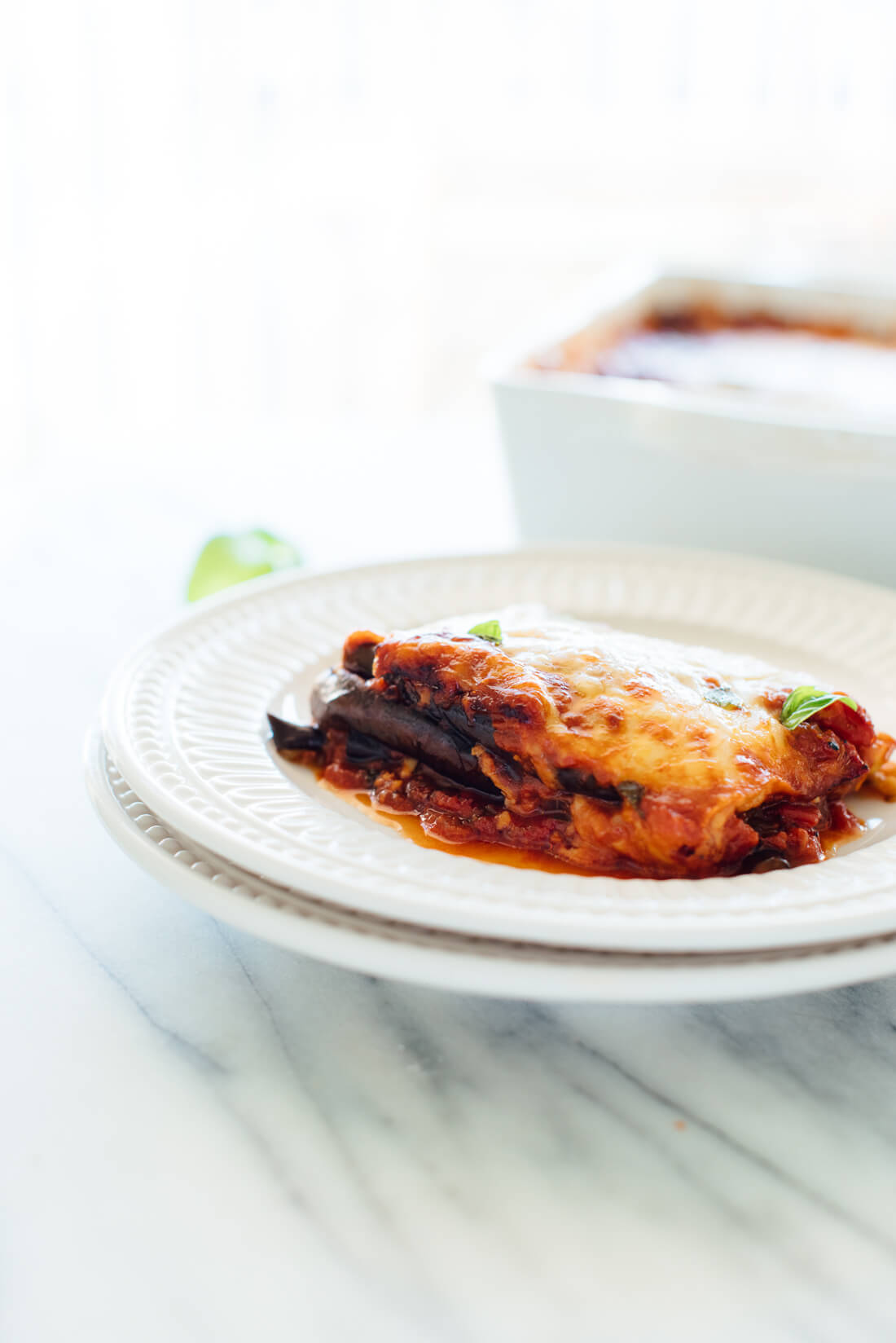 I see you rolling your eyes over there. “Kate, all eggplant Parmesans are Italian!” Let me clarify. In Italy, true eggplant Parmesan (Melanzane alla Parmigiana) is breading-free. Apparently, we Americans decided to coat our eggplant in egg wash and breading.

Another shocker? Italians don’t pour any cream into their fettuccine Alfredo! Let’s now turn to give a collective eye roll at Olive Garden.

Jokes aside, this baked eggplant Parmesan is everything I want eggplant Parm to be. This recipe is made entirely from scratch, but it’s simple to prepare. We’ll roast the eggplant slices instead of frying them. Then we’ll assemble the dish and bake it. Easy! 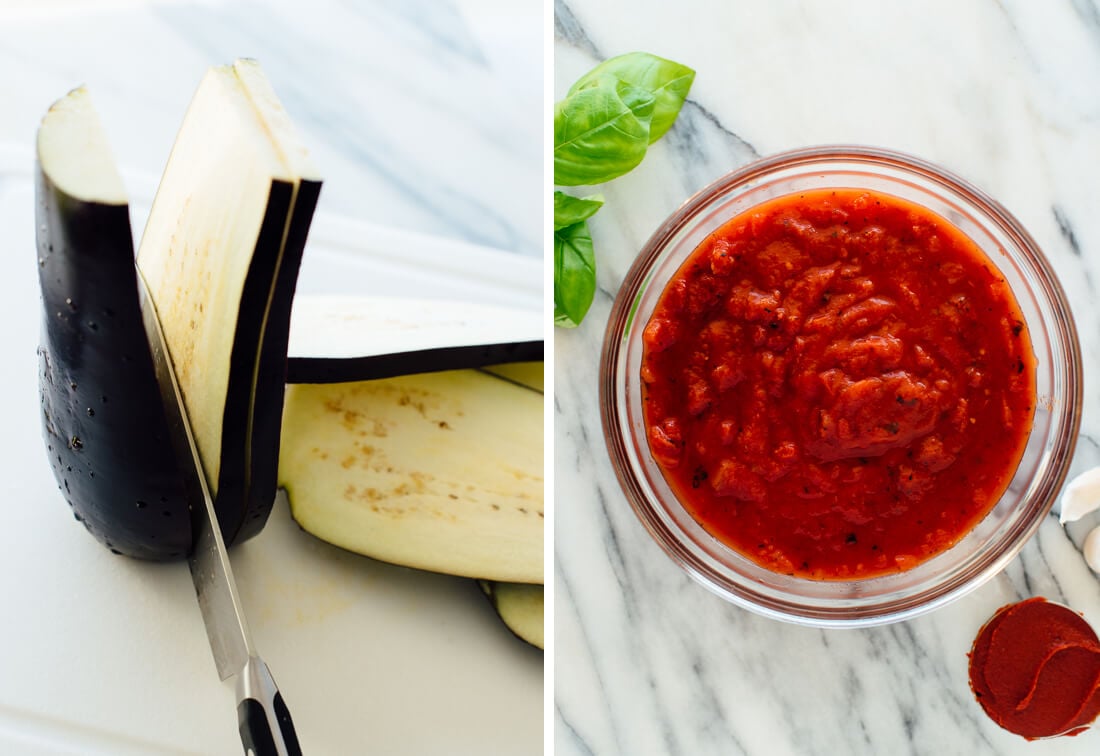 We’ll also skip the breading, which makes this eggplant Parmesan gluten free. Without the breading as distraction, the eggplant flavor really shines through. This dish might look super cheesy (ok, it is cheesy) but most of the cheese is on top of the dish so it can develop that irresistible golden crust.

This recipe is healthier than most American eggplant Parmesans, but tastes like my nonexistent Italian grandmother made it. I made a quick homemade marinara out of tomato paste and fire-roasted tomatoes, which make it taste like it’s been simmering on the stove for hours. If you’re in a time crunch or looking to simplify, though, you can absolutely use your favorite jarred marinara.

Watch How to Make Eggplant Parmesan 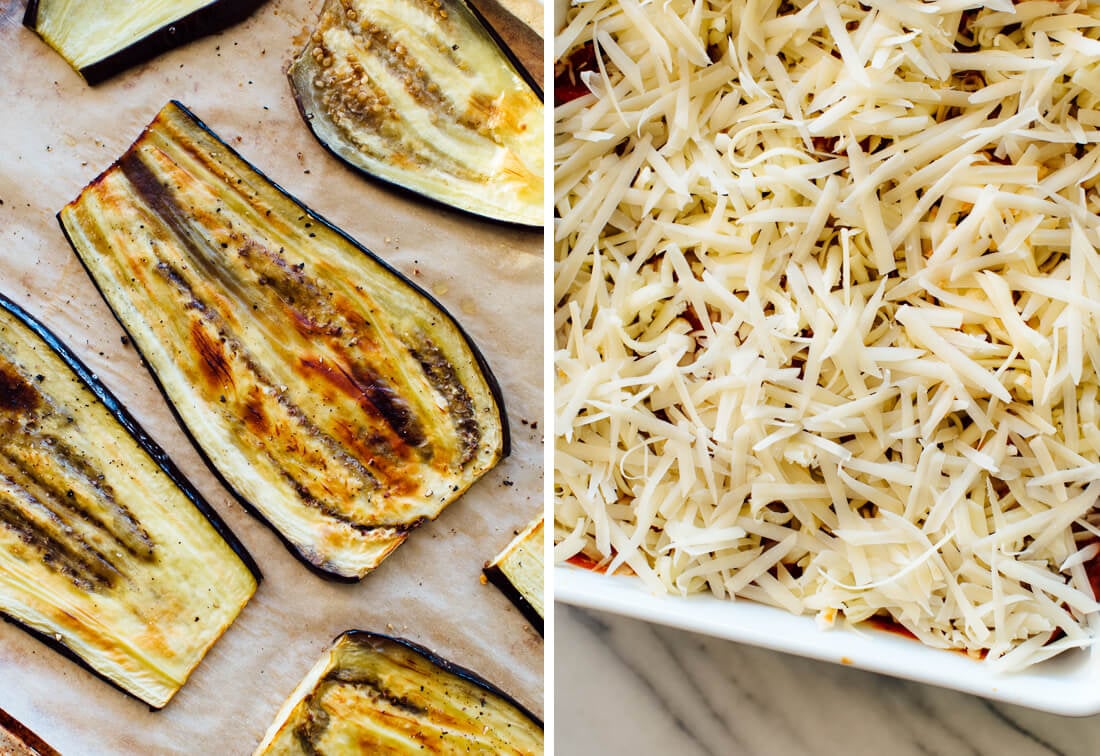 The eggplant Parmesans I’ve ordered over the years at restaurants have varied considerably, but I’ve grown to expect heavy, greasy, breaded eggplant served with marinara and standard-issue spaghetti. I usually walk out with a stomachache and a side of regret.

Then I ordered the eggplant Parmesan at a local restaurant here in Kansas City called Ragazza, which gave me hope for eggplant Parm. Their eggplant Parmesan comes in a cute little cast iron skillet, with layers of eggplant cut lengthwise and sliced like lasagna. It includes lightly breaded eggplant, but it isn’t overtly greasy, and the marinara sauce tastes like it’s been simmering on the stove for hours.

Regazza’s makes the owner’s mother’s recipe, and I have to order it every time I eat there. Their eggplant Parmesan inspired the eggplant lasagna in my cookbook, which includes long strips of roasted eggplant layered between the noodles and marinara. Have you had the chance to try that one? So good!

Since it’s eggplant season, I set out to create a homemade eggplant Parmesan recipe that I could get really excited about. I based my recipe on the lasagna recipe in the book, while keeping Ragazza’s recipe in mind. I knew I wanted to roast the eggplant rather than fry it—pans full of simmering oil scare me, and fried eggplant tastes more like oil than eggplant.

Eggplant notoriously absorbs oil like a sponge, which is why you’ll want to brush oil onto the eggplant rather than drizzling it on.  Just be sure to use fresh eggplant, because there’s no saving mushy, bruised eggplant.

When I was working on my recipe, I got hung up on the breading component. I don’t love dipping my fingers into raw eggs, and it’s hard to find whole grain breadcrumbs. Plus, the breading in eggplant Parmesan inevitably gets coated in marinara and ends up soggy. What is the point of breading if it’s all soggy?

That’s when I dove into the history of eggplant Parmesan and learned that Italians don’t actually bread their eggplant. Eureka! I removed the breading component and landed on an eggplant Parmesan that I truly love. I understand that some may vehemently disagree with me on the breading front, but let’s just agree to disagree.

Before you head to the grocery store, here are some tips: 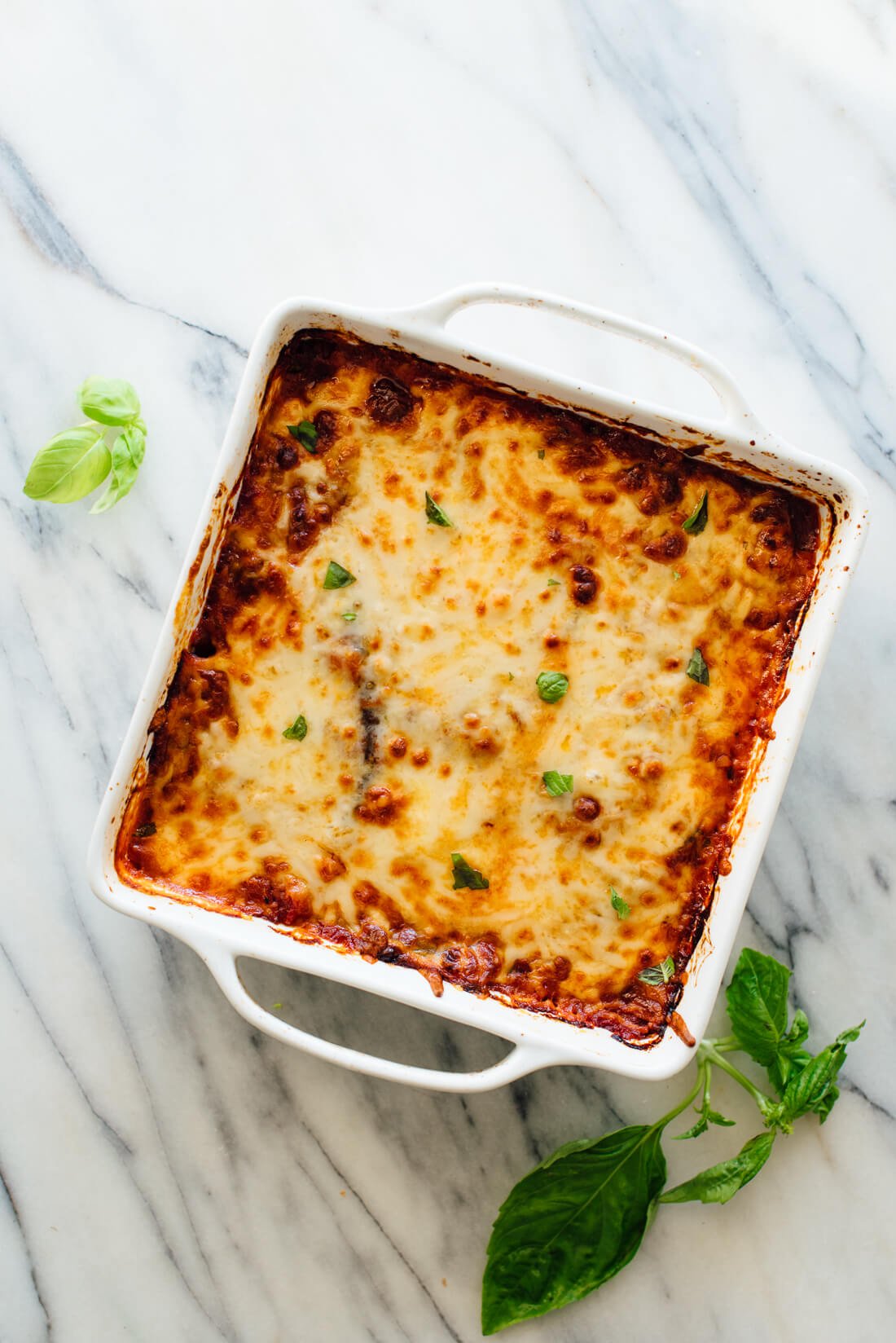 Wondering what to serve with your eggplant Parm? I’d suggest simple side dishes, such as roasted vegetables (you can roast them on the upper rack while the eggplant Parm bakes on the lower rack), sautéed sides or green salads. Here are some ideas:

Please let me know how this turns out for you in the comments. For more comforting casserole dishes, try my Spinach Artichoke Lasagna and Lentil Baked Ziti. 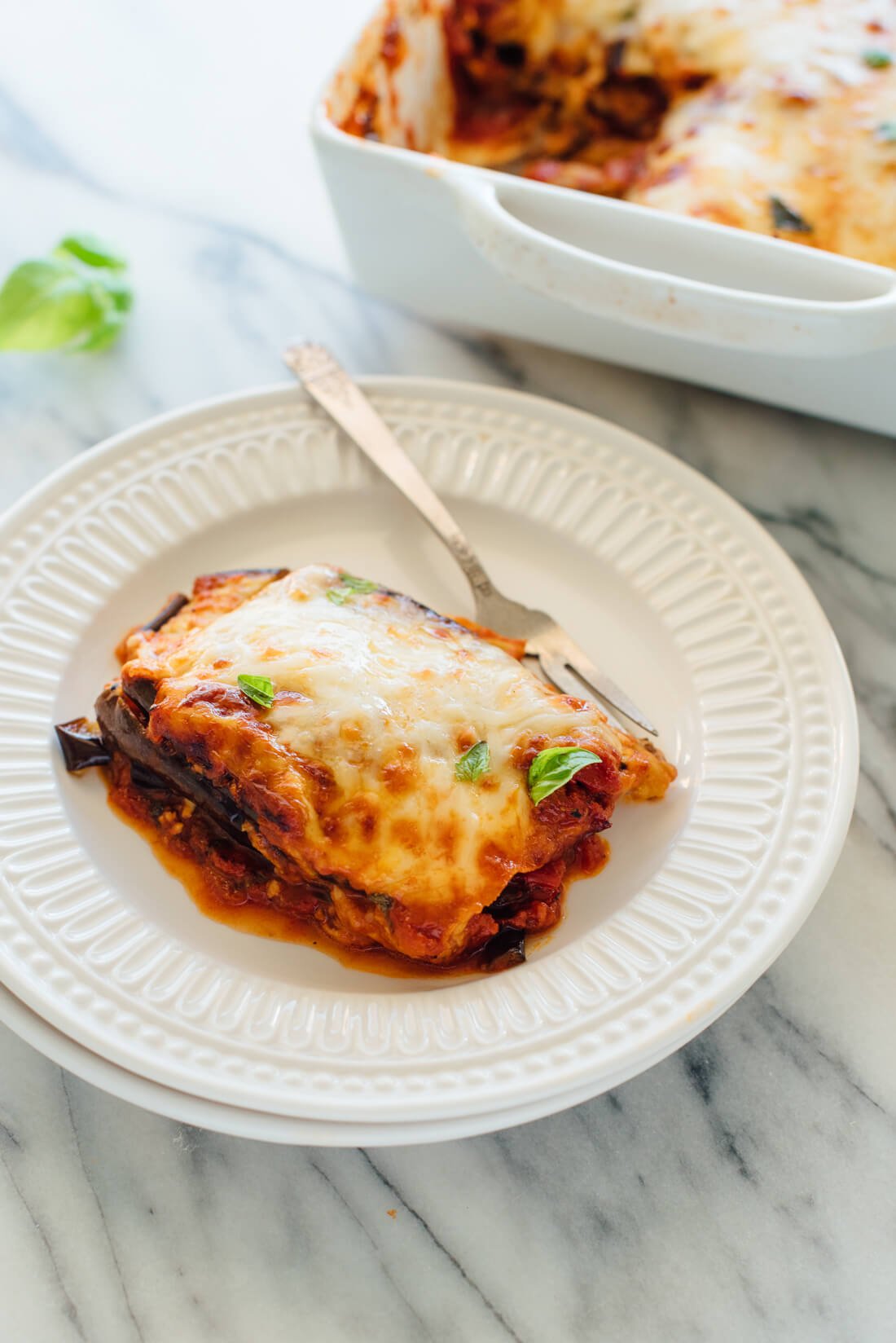 This Italian-style eggplant Parmesan recipe is lighter than most—it’s made with roasted eggplant slices (not fried) and no breading at all. It’s gluten free, too! Recipe yields one 9-inch square eggplant Parm, or about 8 servings.

Recipe inspired by the eggplant Parmesan at Ragazza in Kansas City, and adapted from the eggplant lasagna in my cookbook, Love Real Food.

Shortcut option: Replace the homemade marinara with store-bought marinara. You’ll need about 3 cups (24 ounces). Newman’s Own organic marinara would be my top pick for this recipe.

Prepare in advance: You can assemble the eggplant lasagna the night before (perhaps even a couple of days before), then bake when you’re ready (it might need an extra 5 minutes or so in the oven to develop the golden top).

*Tomato notes: You can also use diced tomatoes or whole tomatoes, processed in a food processor or blender until mostly smooth. My preferred brand of canned tomato products is Muir Glen Organic, for their flavor and BPA-free cans.