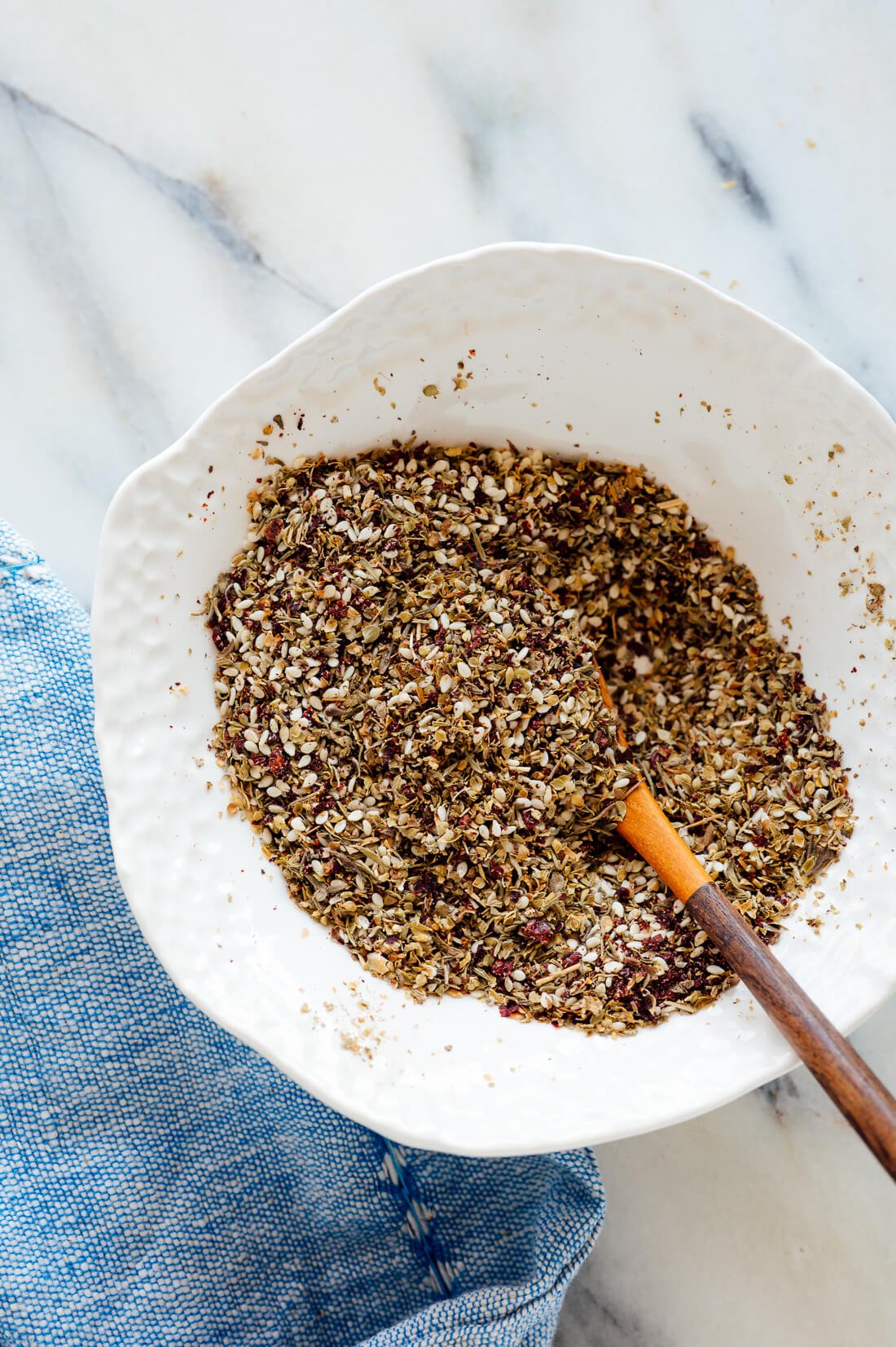 I’m having a moment with za’atar, a classic Middle Eastern seasoning. Za’atar is a unique blend of herbal, earthy, savory, tangy and salty flavors.

Za’atar has been enjoyed for centuries on the other side of the world, yet it has gained popularity in the U.S. over the past five years or so. To be honest, I didn’t understand the fuss when I sampled a za’atar blend from Trader Joe’s several years ago. But then… 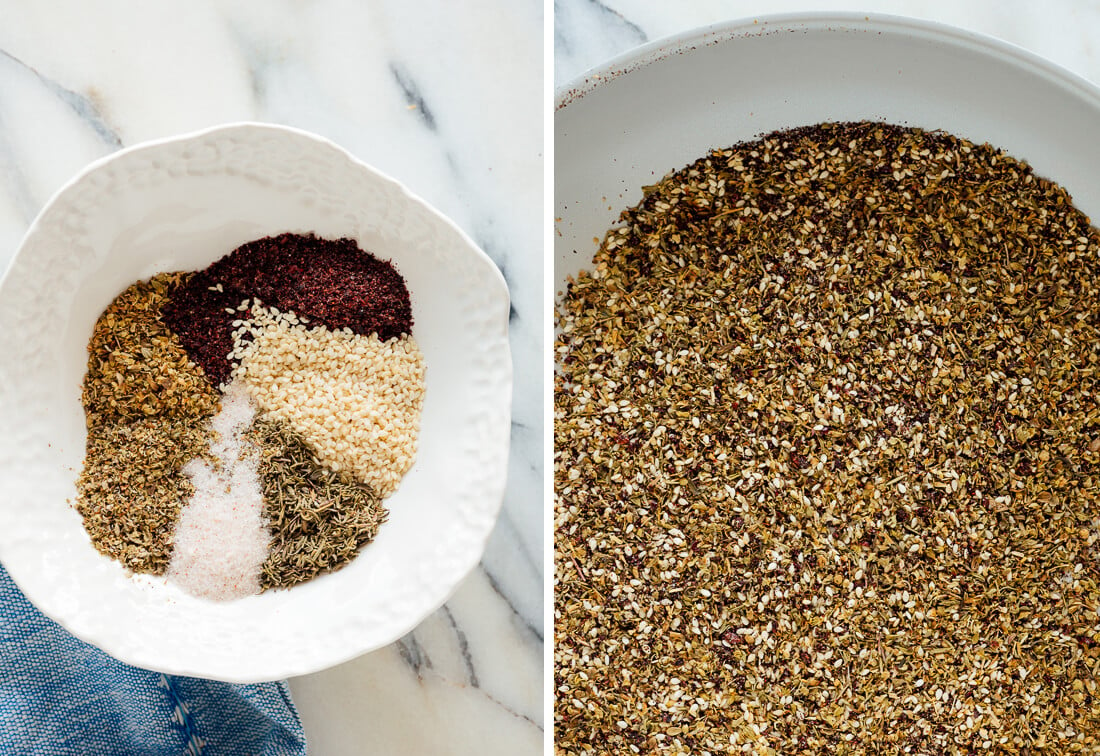 Everything changed when za’atar landed on our table at Shaya in New Orleans. They simply mixed their house blend of za’atar with olive oil and served it with crusty bread, for dipping. I fell in love with za’atar that night, and couldn’t stop going back for more.

This recipe is my best attempt at recreating the flavors in Shaya’s recipe, and I think it’s pretty close. Za’atar is versatile and complements many savory meals—you’ll find all of my suggestions below. 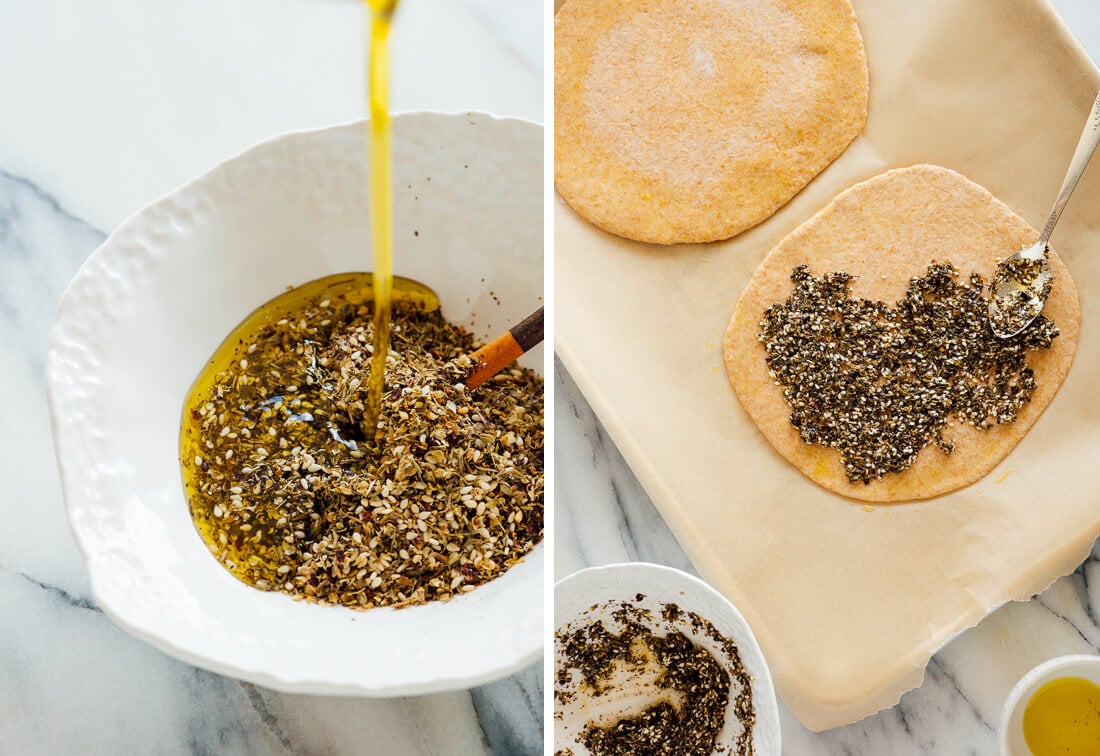 Za’atar recipes vary significantly from place to place and home to home (some are well-guarded family secrets). Za’atar’s origins are fascinating, and also confusing and contradictory. You can read about it all here.

Za’atar is known as “brain food” for its antioxidant and medicinal properties. This za’atar recipe is made with several ingredients that you probably have in your kitchen already! The one exception is sumac, but hear me out, it’s worth buying.

Preferably a Greek or Turkish variety, rather than Mexican.

Sumac is one of my favorite spices. It’s bright, pinkish red, and has an irresistible tart, almost lemony flavor. You can sprinkle sumac on hummus, and it’s also irresistible on watermelon and cucumber with some flaky salt (the combination reminds me of Tajín seasoning). I buy sumac on Amazon (affiliate link).

You won’t find sesame seeds in every za’atar recipe, but I don’t want za’atar without them! They become extra savory and delicious once toasted.

If you don’t have marjoram, you can replace it with more oregano (they’re cousins).

Thyme rounds out the herbal flavors of oregano and marjoram. 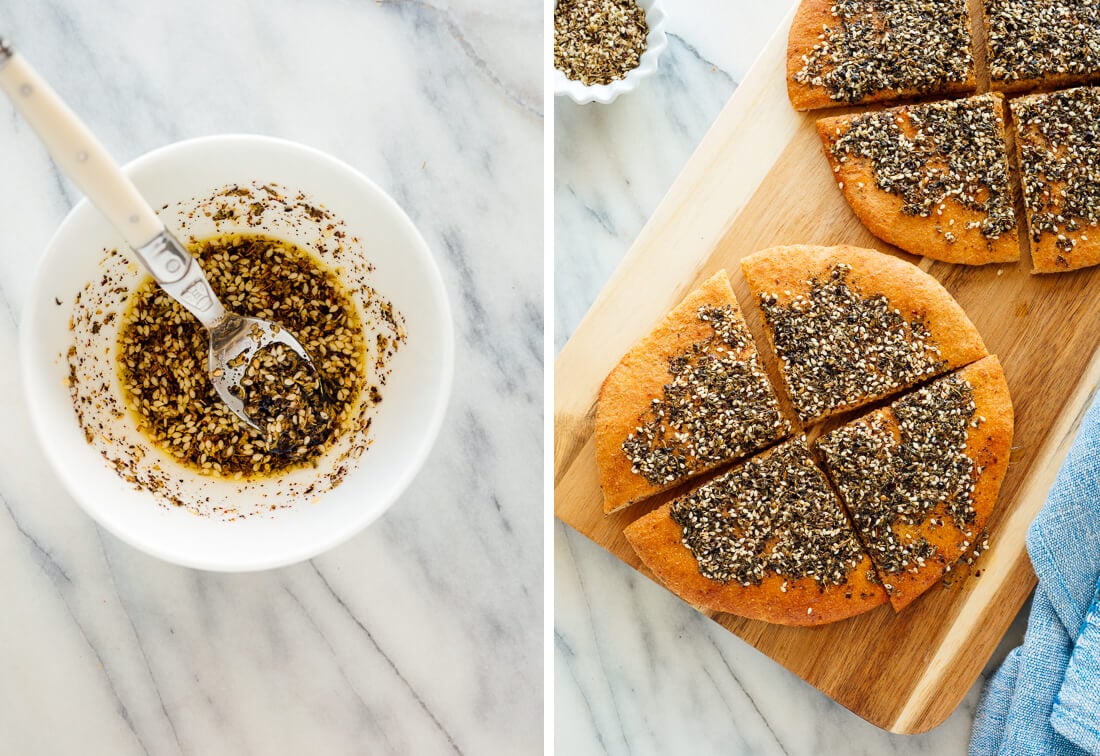 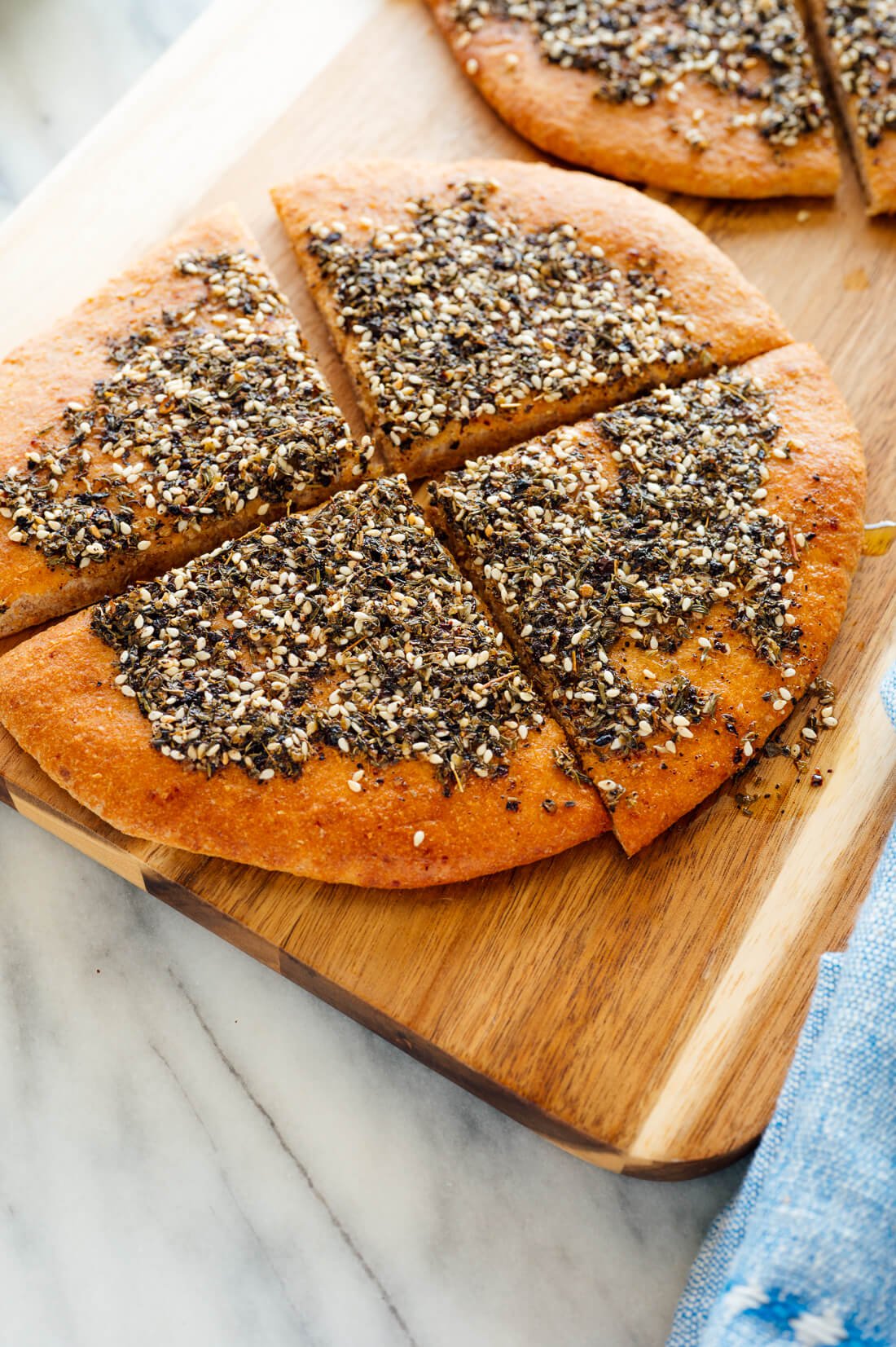 Love za’atar? Here are a few more of my favorite Middle Eastern recipes:

Please let me know how your za’atar recipe turns out in the comments! I can’t wait to hear from you. 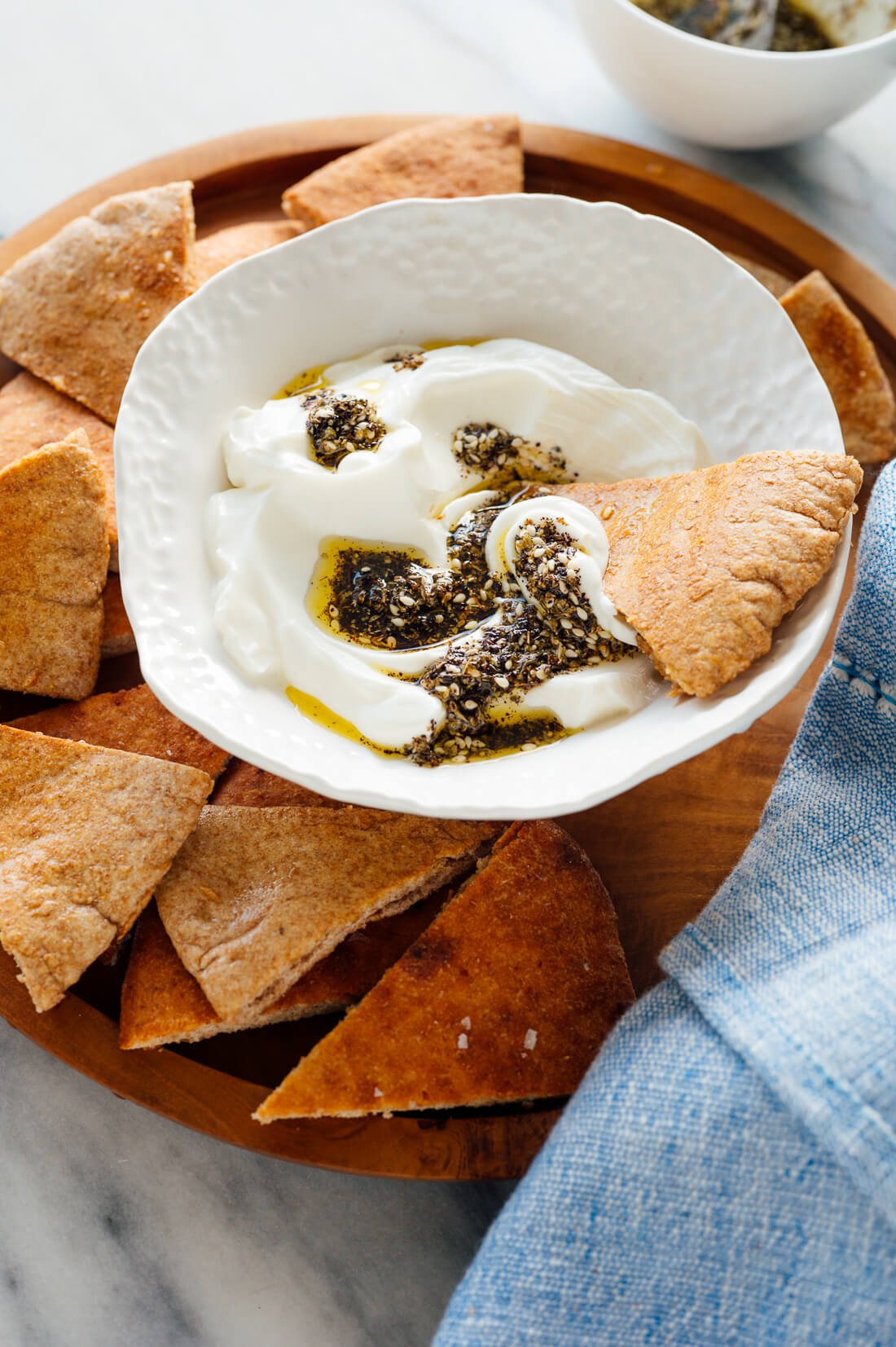 Serving suggestions: Mix za’atar with olive oil and spread it over pita bread (or pita dough) before baking. Or dip bread into olive oil, followed by a dunk into the za’atar blend. Mix za’atar with olive oil and drizzle it over labneh, Greek yogurt or hummus. Roll extra-thick rounds of labneh or a log of goat cheese in the dry spice mixture. Use the olive oil mixture as a marinade, or the plain spice blend as a dry rub.