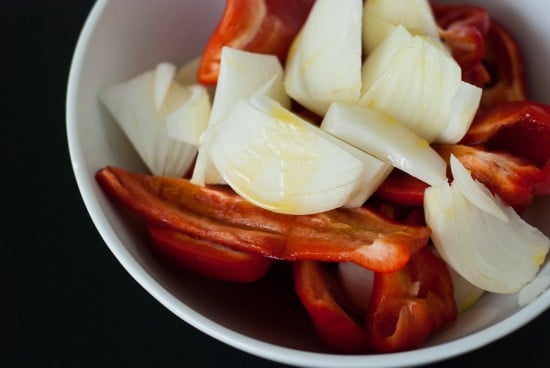 All summer long, I admired other blog’s recipes for soup but broke into a sweat at the mere thought of sipping from a steaming bowl. Tomato and bell pepper soups taunted me most since they contain my very favorite flavors. It just didn’t seem fair that my favorite ingredients grew during the hottest season of the year. Now that it is finally cool enough to turn on the oven and the stove, I decided to capture those flavors in a giant batch of soup to bottle and freeze.

In preparation, I bought a few Oklahoma grown red bell peppers at the Saturday morning farmers’ market and filled a bag with organic tomatoes at the store on the way home. Perhaps I should have made this soup a couple of weeks ago with the last of the locally grown tomatoes, but the weather wasn’t cooperating and I was not to be deterred. 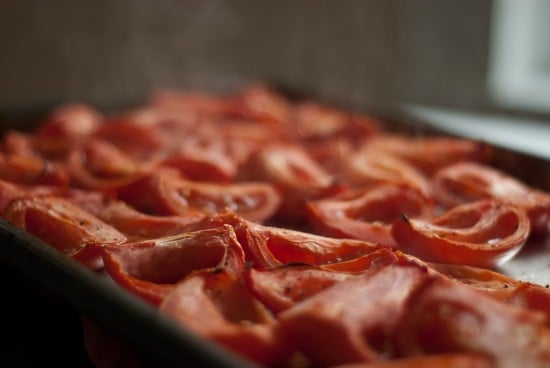 On Sunday, I woke up late and discovered that it was raining for the second day in a row. I pulled on leggings and rain boots and ducked into a diner with girlfriends to discuss the birthday party the night before. As usual, we lamented the fact that there are no decent guys to date in this town (where are they?).

My belly full, I spent the rest of my lazy, restless afternoon making this soup. I hummed along to the harmonies in Feist’s new album as I chopped the tomatoes and red bell peppers, stretched out on my bed to read a few more pages of The Sun Also Rises while the vegetables roasted in the oven, and paused to snuggle with Cookie while the soup simmered on the stove. The falling rain reinforced my idle ways, and I reflected on the fact that someday when I (presumably) have a family of my own, I won’t have full days to myself. For now and the unforeseeable future, I do what I want. This is my time. 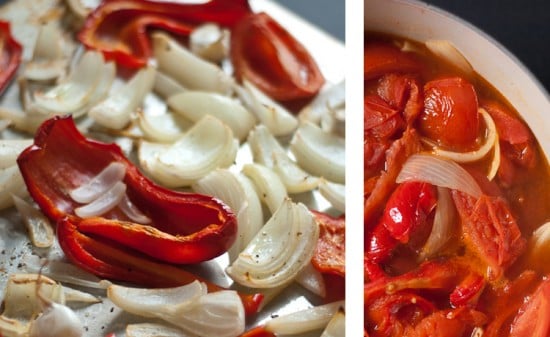 My roasted red pepper and tomato soup is more than just soup—it’s a celebration of the end of summer heat. Slightly spicy and tasting more strongly of peppers than tomatoes, this vegan soup goes great with grilled cheese sandwiches and simple cheese quesadillas. I also love it with avocado on toast. I can’t decide which herbs make the best garnish. Dried oregano went well, but chopped, fresh cilantro seemed like a slightly more complimentary flavor. 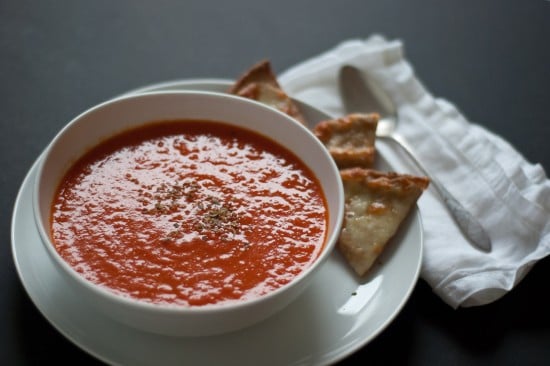 I divided the soup into 8 ounce canning jars, filling them up to the freezer line. I left the tops off until the soup had frozen completely. I feel a little better about the predicted harsh winter ahead knowing that I’ll have hot soup to warm me up. 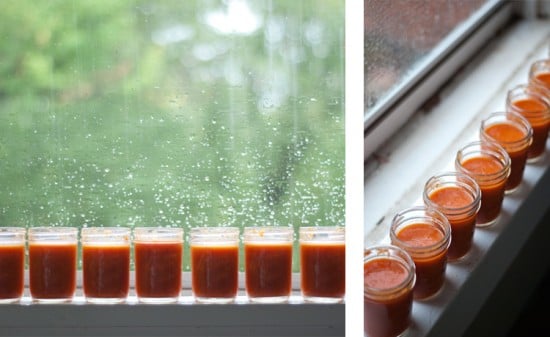 Roasted red pepper and tomato soup to celebrate the end of summer heat. Make a giant batch to freeze for cooler weather! Recipe yields a lot of soup (about 12 cups).

Make it creamy option: Add 2 tablespoons heavy cream or ¼ cup half and half to the soup for a more creamy texture and mellow flavor (add more to taste). Or, serve bowls with a dollop of sour cream or vegan sour cream.

Now that I’ve bottled my favorite summer flavors, I’m ready to move onto creamy fall bisques and hearty vegetarian chilis. What are you making next?